Continuing on the plundra boxes

Well, seeing the comments on my last post does make me think about the box more, yes you are correct about how players will ask for more and more space. i do see that being a major problem but if not give more space, than give the players a increase to the ammo carry, from 250 to maybe 450 because that is what i am storing at the moment. i go through more ammo than i can gather it sometimes. i am also glad on the responses i got on my first post, thank you all for that.

How much ammo you possibly could need?

Inventory management is the key here. For example, here’s my 4th char: 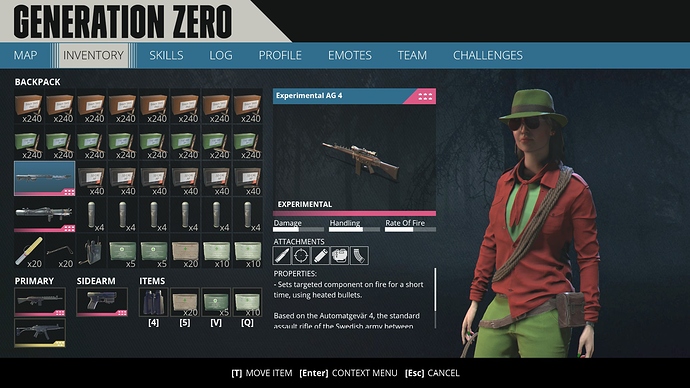 That’s 4720 rounds of ammo and 28 rockets, more than enough to take on any sized battle and then some. I’m covered for all ranges (.50 cal for long range, AG4 for mid range, HP5 for short range) and groups as well (HE rockets). Glock 17 is for backup, if i run out of ammo (which hasn’t happen yet and by looking how much ammo i carry, it doesn’t happen any time soon).
Also, i have one full row free for misc items, like a-shots, lockpicks and first aid kits.

Like i said in your Plundra storage increase topic, same thing applies here: Run and gun players will never be happy with the ammo limitation, regardless how big it is, until there is no limit to the ammo you can carry.

Also, i’ve said it before and i’ll say it again: GZ is not a run and gun game. If you run and gun, you’ll run out of ammo sooner than later. Also, pick your battles and don’t shoot everything that moves. GZ isn’t Doom. Btw, Salvage skill, especially lvl2 helps to loot more ammo. Helpful for all play styles.

Actually GZ can very much be played as a run n’ gun game. GZ is a sandbox where you can take many approaches to how you play the game.

Actually GZ can very much be played as a run n’ gun game.

Yes, GZ can be played as run & gun but it wasn’t designed to be run & gun, thus it doesn’t completely match the run & gun gameplay style. Notably; too small storage space for tens of thousands of rounds, few and far between ammo drops (need to brake your “flow” of shooting to go and scavenge more ammo), no self-healing (passive healing without the need of first aid kits) and few others.

Hence the 2x topics OP has created so far, to make GZ into run & gun game. Latter is something i’m not okay with.

Can agree it isn’t pure run n’ gun as it would need things to be much more “streamlined” to be so, but i think GZ is an awesome game because it can cater to so many audiences in the FPS genre, take for example the run n gun factor, from just 30 mins of farming i can then get a good 3-4 hours of straight machine carnage. Simply optimizing my use between my engineer that gathers resources quickly and my vanguard that burns them slowly. But then when i want to play more stealth based, i can go to my marksman stealth build and take on machines without them noticing my being there (most of the time

)
I think gz is going in a good direction to cater to all audiences of this game, as best as they can without stretching themselves too thin

I actually think they should decrease the amount you can carry to maybe half. Because as of now you can carry ammo for an entire platoon alone. Sure I could make a house rule to carry less but that wouldn’t work because other players could ignore it. As of now there is no need to be stealthy. Just attack everything because I will not run out of ammo.

I think some sort of hardcore mode would be the best solution, with rules setup by the host that applies to everyone that joins your game.
Imho that would be better, since it is impossible to get everyone to agree on things like this.

I hope for the sake of all sakes, they will NEVER EVER increase Pundra again.
See: over 4 characters we have 40 inventory slots, and 100 Plundra slots, which amounts to a STAGGERING 260 slots of stash space.

That just does not suit the game, IMHO.
Before Plundra, we managed well, very well…
Hence I see no need for even more inventory space, that WILL affect the not existing anymore already balance…?
Right?

See: over 4 characters we have 40 inventory slots

Correct, I did not add these since these are bound to a certain type of item.
The slots I referred to are “open” slots.

You do have a good point there, still, miss, thank you.