Grinding to Level up a region

Since the reaper came out and all the rumors on how to get a reaper to spawn in a region, I have finally got 7 of the 8 regions to level 21 or better with less than 8 rivals in each regions. Some of the regions were very easy to grind to level them up with a lot of target to do so. But about half of the regions I had to clear off all rivals and start from ground zero.

I would get so far and then run out of machines, so run all over the region looking for them. Attack hunters from rival harvesters only give a limited amounts, runners and hunters around rival tanks again, in very limited amounts. Random encounters are not very common with only a few places that you can find a machine or two. Even lured machines from other regions to level up.

But after two hours of grinding a region you get a rival spawn and if you don’t keep them in check you will get 7 long before the region slowly climbs to level 21. I know, go grind another region while waits for one to cool down…you run out of regions before 4 hours have passed.

Tried playing the game solo for a few hours, leaving for more than 4 hours and hunt the same areas, sometimes machines will respawn but most the time not. Hundreds of hours, both playing and waiting to get a region to level 21. This is not a fun way to play, but I can now spawn a reaper most anywhere.

There was a thread not long ago about grinding in the game, it was about loot. To loot machines you have to grind hours for them at times…

It’s not the machine spawn it used to be.

Even milking every last tick out of a battle, is still 50% slower in region growth. The Archipelago is a write off to build, it’s minimal machines at the best of times. South Coast is OK providing you’ve a fresh machine load, SW Lighthouse to Ringfort is a good grind.

The rest is region specific, so if there’s an area you want I can throw you a few hotspots

I hope they change the way Reaper is spawned - we gave up grinding regions after a single battle with Reaper, because - a) it’s just a huge bullet sponge, b) the loot is not worth the effort particularly compared to couple of L4 rivals which are “cheaper” to spawn, c) it’s hard to maintain nr. of rivals under 8, d) keeping the region level >=25 (why?? we are on level 31)

Reaper should be IMHO a clear and present danger instead, roaming the map, chasing the player(s) and giving us a satisfying loot after a cool battle, not just blowing itself up when it “got tired of being shot at”.

Reaper should be IMHO a clear and present danger instead, roaming the map, chasing the player(s) and giving us a satisfying loot after a cool battle, not just blowing itself up when it “got tired of being shot at”.

I have had a reaper jump borders and also a fairly long chase across some of the map a few times.

I save and manually back up my game at where I am at and then fight all my rivals for the fun of it. I lose/gain everything back when I load my saved game but just fighting the rivals is a little short lived fun of destroying machines without worry of having to grind the region back up again. I just load my last save when I am ready to continue play.

I just don’t see the point in a Reaper in the Archipelago.

Even when I was grinding to spawn rivals, before there was a reaper, the region was pointless and grinding was very, very slow progress. I think I got to 7 when the Reaper came out. And it took weeks of playing. I would grind Archipelago till I couldn’t stand it anymore then find a region to level up one of the 8 rivals in it.

But i think the region is at level 7 right now with 2 rivals. Maybe if I grind real hard I can get it to level 21 by the end of the year! sarcasm If I am lucky!

I hope they change the way Reaper is spawned

Regarding this, i proposed one way in here: Idea: Rework to Rival and Reaper spawn system

you run out of regions before 4 hours have passed.

This way (walking or biking), you spend more time in one region and have higher chances meeting more machines, thus accelerating the region score rise.

Tried playing the game solo for a few hours, leaving for more than 4 hours and hunt the same areas, sometimes machines will respawn but most the time not.

Or you can cheese the machine spawn as well. Just quit to Main Menu and then Continue the game. New machine spawn seed is generated and game world is repopulated with machines again.

Some of the regions were very easy to grind to level them up with a lot of target to do so. But about half of the regions I had to clear off all rivals and start from ground zero.

With this, and at current date, i’m starting to think if machines amount is also individual and if, perhaps, it has something to do with in-game difficulty level.

I’ve always played on Guerilla and while at current date, the map is mostly empty of machines, there are certain hotspots where loads of machines are all huddled together and they are just standing there. Finding those hotspots is quite a bit of work but once found, i can note that loc down and i can visit that spot reliably to battle with machines and increase the region score.

But the easiest way to level up a region, any region, is to play multiplayer with 4 players and having Automatic Difficulty Scaling: ON. This spawns in far more machines than playing with less players.

Now that is golden, nice work.

Thank for all the advice! And I like your map but seems having 8 rivals in all the regions would be a fun map to hunt rivals but not so much for spawning a reaper. Reminds me of our maps before the reaper and having Rival hunt parties!

I do have a question, While I was collecting collectibles, doing missions and had objectives that are part of the game, machines would ALWAYS be at my objective on the map, with them all completed there is no need for machines to be in those areas anymore? What I am suggesting is maybe because all objectives designed as the game are completed there is no reason for the machines to spawn in those areas anymore and the game doesn’t have a lot if any, random machines for after the game is completed?

The resistance collectibles were the last objective I completed. To get to where the bottles were there were always machines near the bottles, now the bottles have been collected there are no more machines in those areas. My map is considered finished?

Only time I get a lot of machines in an area is to spawn a reaper, then there will be a few machines like tanks and harvesters in that area, where there were none before. Am I making any sense?

I turned it OFF and now, i have about twice as much machines to shoot at (suitable to two average players).

Cool, I will try this setting, see how it works for me.

Thank for all the advice! And I like your map but seems having 8 rivals in all the regions would be a fun map to hunt rivals but not so much for spawning a reaper.

Since almost all of my rivals are lvl4 tanks, they are part of my rival collection and i won’t engage any of them. (Took me considerable amount of time and effort to get only tanks as rivals.)

In that sense, yes, it is far harder to level up a region since i have to avoid all areas where my rivals are. And sometimes, rivals are in the machine hotspots as well. Then again, it gives more challenge to a game, with these “area of denial” spots on the map. Also, when i battle somewhere, i track the closest rival and if it happens to walk towards me, i finish any battle as fast as i can and flee the area.

machines would ALWAYS be at my objective on the map

This can be one of three:

Personally, i think it could’ve been 2nd one. But if you didn’t use waypoint or POI tracking, then, my next pick would be 1st one.

Took me considerable amount of time and effort to get only tanks as rivals.

Yesterday - I managed to force a Tank that killed me into a rival. My thinking is because I stacked a few hundred XP in machine kills in the battle before hand, which converted into Rival as it was the last machine that killed me.

There may be a method here somewhere, I shall do some more testing but would sure beat RNG.

Yesterday - I managed to force a Tank that killed me into a rival.

It is still in play but now, it’s more likely that you’ll get random rival spawned by the region score, rather than spawned by killing the player.

Btw, i didn’t cheese the rival spawn system by player kill method, to get my rival tanks. (I have pride in my K/D ratio.) Instead, i took out everything else around the tank and kept tank in my view, when i was about to get another rival spawn.
Or course, not always i got a new tank rival and i had to weed out the machines (killing non-tank rivals and crossing my fingers that new rival is a tank.) ← I do this practice to this day and only tanks that i do kill, are either in those regions where i already have 8 rival tanks in them, or are relay beacon guards.

I keep my rival tanks as pets, to say so.

I keep my rival tanks as pets, to say so.

I had a pet reaper, I even took a nap under him. 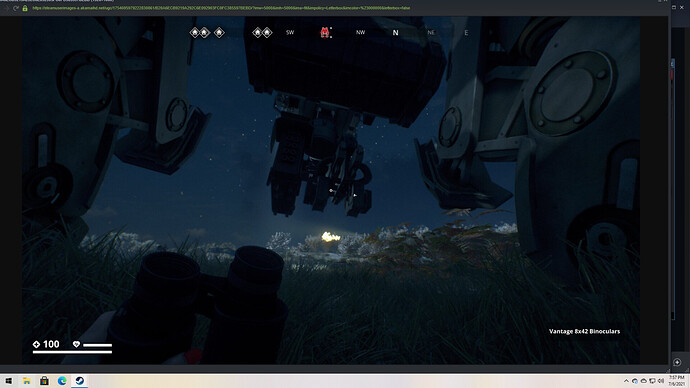 I also have a few screen shots of dancing with a harvester and a tank. Went on patrol with some hunters. Even have a shot of a tank attacking all my friends and me standing beside him.

If only we has sticky bombs with time delay fuses!

Last night’s battle with a reaper was in the Farmlands, a level 24 region, and the level stayed at 24 after the battle was over. That was new!

Personal note: Last 5 or so reapers I have battled I was able to destroy them before they did it them self. The reaper last night was down to 8% and he did that thermonuclear (what ever it is called) blast and he was still at 6% afterwards. I destroyed him with the KVM59 (5*) and shock ammo. Has this been updated where they can’t destroy themselves?

Shock ammo staggers the machine, and in Reaper’s case, blocking it to continue with it’s self-destruct sequence.

Shock ammo is currently the best way to kill the Reaper without it self-destrucing. 2nd best option is MP game with 4 players with Adventurer difficulty (to have Reaper as low as possible HP pool).