The art of Simon Stålenhag

Personally I feel like it’s a mix of both, as the Game’s main theme sounds a lot like the original terminator theme, and it takes quite a few elements from tales from the loop. I feel like it may be kind of polite of avalanche if they at least admitted to taking some inspiration from Simon. As Simon said; “Borrowing, referencing, and modifying other artist’s work is a very important part of art.”
Simon also said he was fine with the team taking some inspiration from him, but the problem he had was this; “The minimally decent thing to do would have been to at least acknowledge the similarities when pointed out.”
I feel like avalanche should admit to the similarities if they haven’t done so already, as I think it would be rather polite.

Never heard of Tales from the Loop. I checked it out on IMDB and found nothing about it.

What is it about?

It’s an upcoming Amazon Prime series that is still being worked on.

If you’re the role-playing type (as in, a bunch of people telling a story together, not sex, not a videogame with stats), you might also enjoy the Tales from the Loop RPG.

I’m not sure whether in Sweden, you’d be answerable to your shareholders if you as much as gave the impression of needlessly volunteering something that could be construed as the basis of a lawsuit. So I always figured they were cautious on that count.

It bothers me a teensy bit that the devs really do seem to be plagiarising Stalenhag’s work a bit too obviously. The FNIX Rising DLC has towers that look so much like this; colours, shapes, cables… 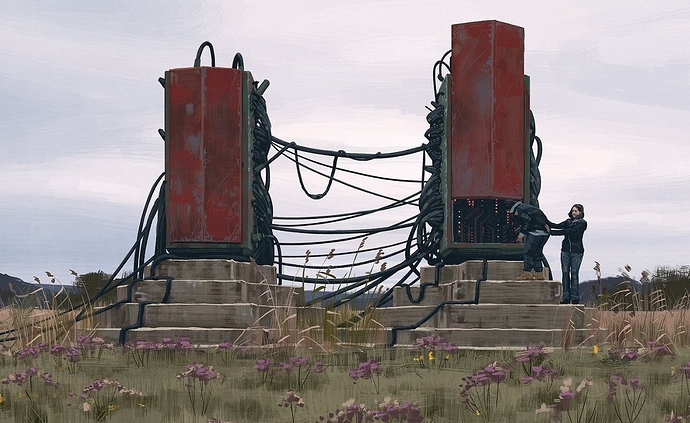 I agree that the new look of the South Coast has a more Stålenhag’ish feel to it, but in a very positive way. I do not believe Avalanche has ripped him of in any way. Nobody has a patent on «set in 1980’s Sweden», not even when you add robots, and GZ has it’s very own story and lore to rest upon. Both his art and this game is very atmospheric in a unique and nostalgic kind of way, and I think that’s the essence of how these misunderstandings occur.

I understand your point, but its very close isn’t it? Avalanche could have created a machine-built landscape that had a quite different feel.

I don’t think there’s any resemblance other than the setting. Stålenhag has done loads of other works, but people tend to get hung up on that both Generation Zero and some of his art have a similar premise. 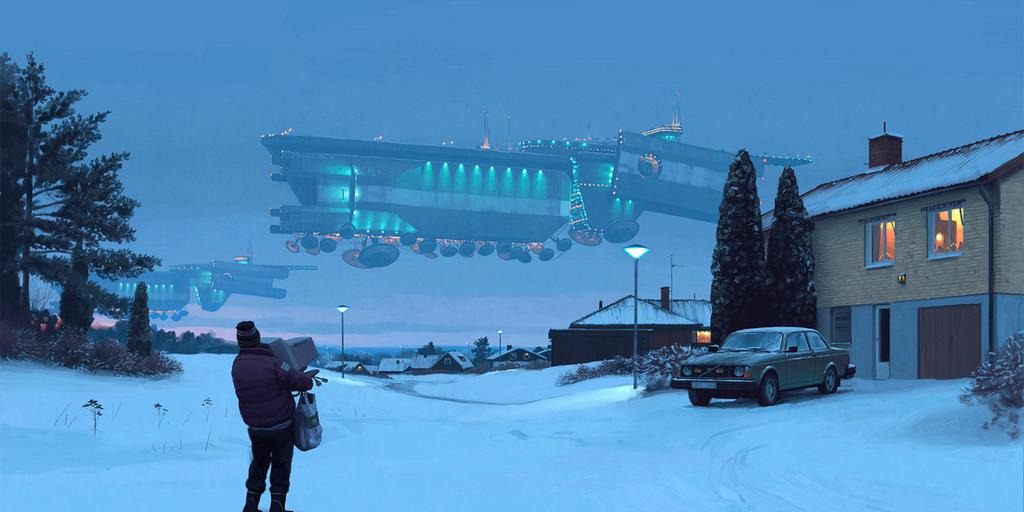 There’s a strong, weathered, post-apocalypse feel to some of his art. At the same time, much more along the lines of sci-fi with huge towering structures, floating craft and so forth, than just robots. There’s also a lot of mystery, sure there’s robots, but so much else in stark contrast with the 80’s Sweden setting. 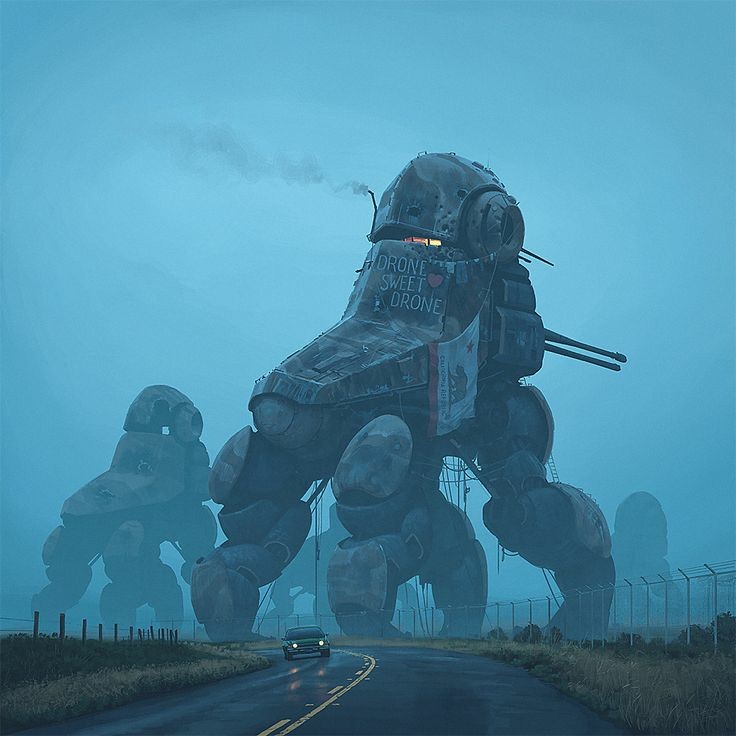 Of course, there are similarities. But Generation Zero isn’t plagiarizing on Stålenhag’s art. It’s doing something vaguely similar, with the same setting. I don’t mind if concept designers of GZ are inspired by other art around them, as long as they try to do their own thing and keep that scene alive.

No, I’m glad they created exactly what they did. It’s actually the GZ concept art that bears the most resemblance. In-game, I have never really felt that Stålenhag vibe, maybe until now in the South Coast. GZ is it’s own thing. I do see your point, though.

I think there has been a genuine opportunity missed here that could have elevated this game above, and beyond our expectations in visual impact.

Considering the subject matter, the colours, the tone, feel - it amazes me why he was never taken on. At least in some capacity in consultation, or an external creative source.

Seems the walls were put up way before the paint dried - which would only imply one thing.

It seems people most often refer to Tales from the Loop as the Stålenhag work that’s supposedly been plagiarized. I’m not very familiar with his work, but it looks like Tales from the Loop is indeed the one set in 1980’s Sweden. However, people have pointed to several other pictures of his, and compared them to GZ. Pictures from The Electric State have been pointed out, and now we’re not even in Sweden anymore, but in the US by the looks of it. Now the case becomes even more far-fetched. The image @Saddletank posted yesterday, I believe is taken from Things from the Flood. So if we’re just talking Stålenhag in general, not even one of his specific works, the case in favor of plagiarism becomes very weak.

And so the controversy continues, eh? I’ve met this the very first time I did research on Generation Zero, a year later and it still lingers. I came to believe the motif can be similar with the drab colors, but the setting is so circumstantial. Why you think you see similarities is because they share the same country that both take the inspiration from their own surroundings, but that’s not the only thing. Would both be plagiarizing the trope of creating Sci-Fi back in time? Some terrible movies have done this, so he might be plagiarizing from the idea. Nothing’s original and ideas come from somewhere. Stalenhag has a broad spectrum of ‘creatures’ and Sci-Fi in his work. The only constant is the setting.

He’s good with colors, so it’s always this deep and cold palette and he’s really good in general. I just don’t think it’s fair when he has covered so many different Sci-Fi machines. The shapes vary in so many, giving off this new style in this same setting. Some of his art includes people smaller than the unknown, some art includes them messing around with these ominous objects, some show round machines, some show messy machines, some show fleshy, some show blocky machines and those flying ships. He has a singular style in coloring, but not in the Sci-Fi creatures he creates, so he’s covered a broader field, but you’d pick up on it if it just slightly aligned from this one piece to the GZ’s machines.

I’m afraid this kind of controversy has already massively impacted any creative freedom to create new structures, just because they could face backlash from communities that think they’re stealing ideas… Imagine we are just getting reskins of machines just because if they made something more organic looking, this topic would flame up again. I could also make the point that we are plagiarizing when WE suggest machines… Our idea came from somewhere. It comes from objects, other seen things and sometimes is a mix of multiple ideas, but if you think you’re original for coming up with it, you’re not. Someone out there has already thought of it and done it. The difference will be if that discovery stops you in making your own or makes you dig deeper for something original.

I don’t think the structures are any point plagiarizing Stalenhag’s work… I’ve seen all his art, admired it even, but at no point in playing FNIX rising did I ever think of him. My brain made no connection to him.
Remember that altered warboard in FOA 4 that was a trap in Alpina Unrest? Yeah, reminded me of a HyperX Ram stick 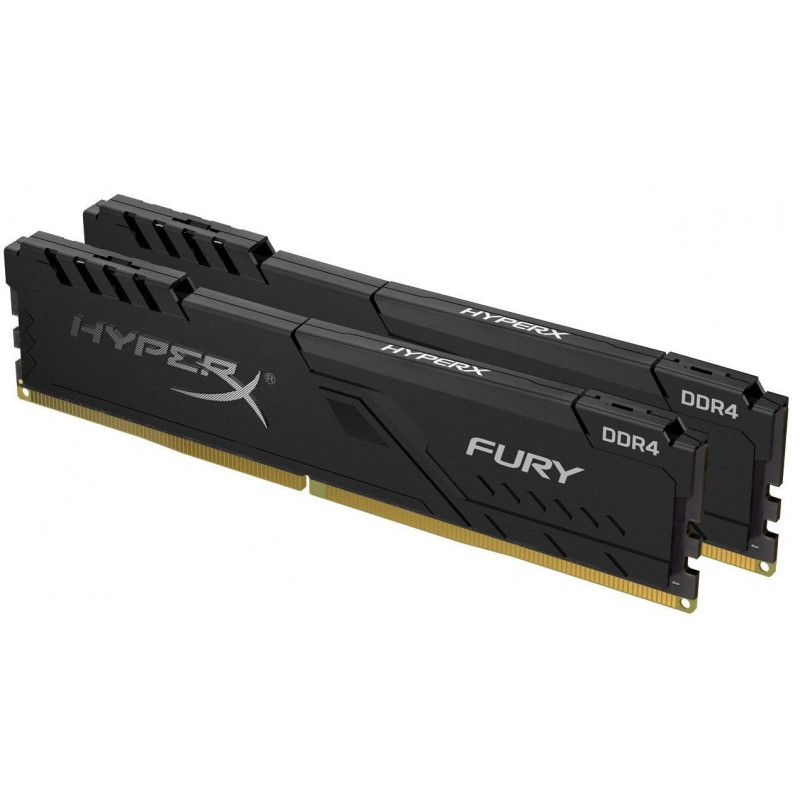 I’ve played the RPG tales from the loop