I’m playing on a Xbox One on my own world.
I’ve completed all mission trees in the Truth challenges, killed 9k robots and have 117 Relay beacons destroyed. I only have 3 remaining achievements to unlock and they are; Tunnel Rat (5 bunkers discovered), Kill switch (10 relay beacons) and Go-Getter ( 25 World Missions) all of which should be unlocked. There is no way that they shouldn’t be unlocked but they are not. I’m not about to start from scratch just to get 3 achievments so I’ll patiently wait for a fix.
Edit: I went around and destroyed 10 beacons ( had to be 10 after this current update) and got the Kill Switch achievement. Thinking along those lines I travelled to all war bunkers and the first Salthamn bunker but that still did not unlock Tunnel Rat and Go-Getter remains locked as I can’t redo missions.

Did you do side missions offline?

Still bugged as in you went and discovered 5 bunkers on your new play through and it still didn’t unlock?
And yes, I did all of my missions solo on my world. I ended up helping a friend do some missions and got the Go-Getter. Still don’t have Tunnel Rat though. I’m going to try and join randoms, hope they are new to the game and discover bunkers on their world. Fingers Crossed

What? You got Go-Getter from joining random online lobbies? Didn’t get offline?

Has any one completed tunnel rat? Mine is bugged, I’ve been to more than 5 bunkers… I’m on PC/Steam, has anyone found a fix? Is this a common issue, are devs fixing this?

As I understand it the achievement/trophy should unlock after finding the main mission bunkers. I have been to all of them (and numerous smaller bunkers) but so far this trophy also remains locked for me. What’s more, there is no bunker icon on the game map for the “Uttern” bunker although I have thoroughly explored it and unlocked the safe house therein. Don’t know if this is somehow related to the trophy not unlocking.
Playing on PS4 Pro, solo and multiplayer, since August update.

Issue/Bug - Trophies not unlocking or triggering.

(EDIT) Just realized I also did not get the “Hasta La Vista Baby” trophy either. Which is to destroy 30 Seekers. I did not see the pop up for this and I am not aware of when I achieved this one but it had to be last night because I have recently just killed a handful of them.

When I achieved Decimation,Tunnel Rat and Kill Switch I did get the challenge indicator on screen saying I got them but they did not register.

All of these were achieved in Multiplayer aside from Decimation. I did get some of the kill count within singleplayer. Multiplayer was hosted by me or one of 2 other friends. Most of the time it was just me and one other player. 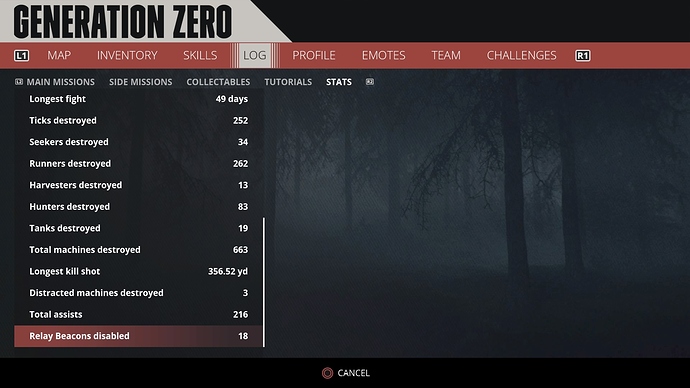 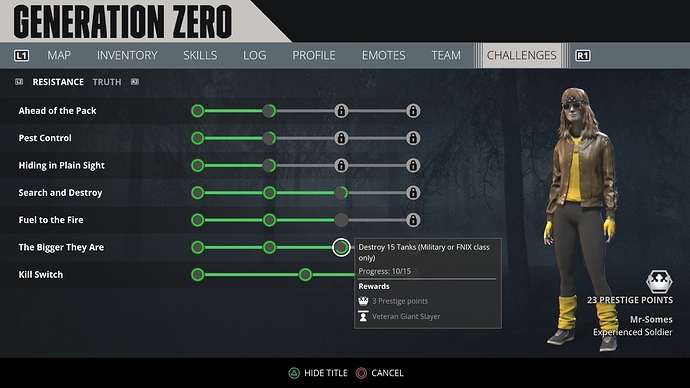 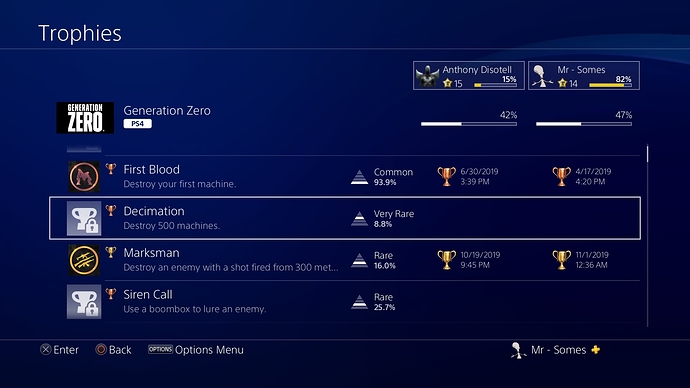 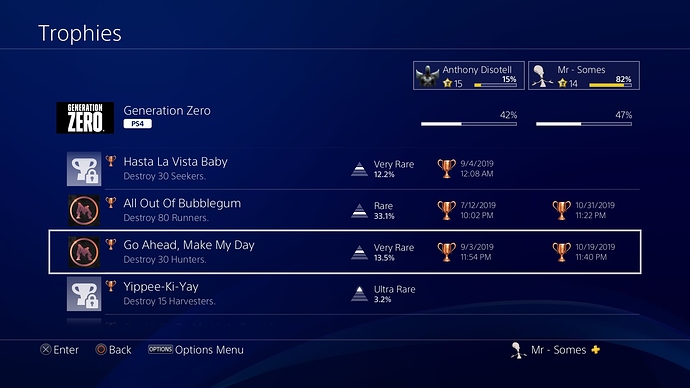 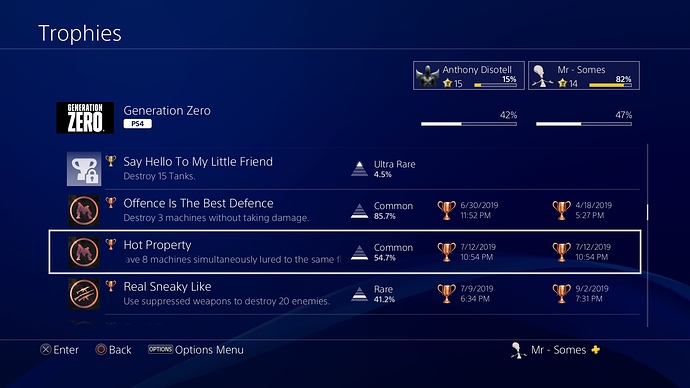 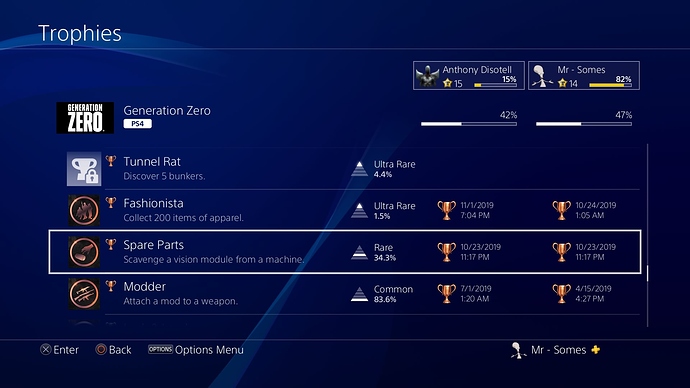 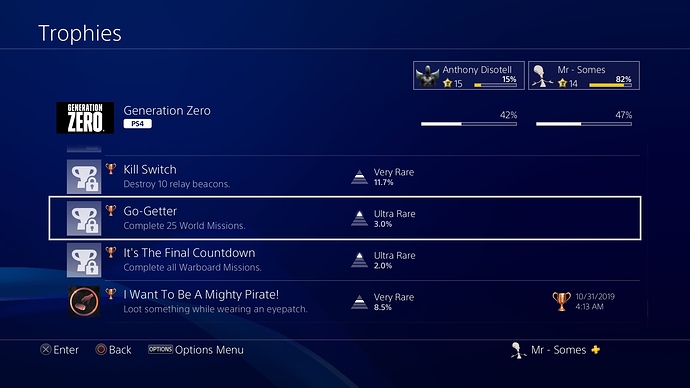 It is very common that people had a trouble to get certain achievements unlocked especially 25 world missions, 5 bunkers, and some other achievements.

You can ask a developer about this. Message to @Avalanche_knivspark Hope this help to resolve the issues.

AfaIk those achievements have been reset with the September update to solve some issues.

Problem is… while one could shoot enough machines from that point on, one is not able to find more bunkers or fulfill more missions, when he/she already had a good amount before that reset…

Go-getter is not working for me either on ps4. 34 main missions and 29 side missions completed. Stats only show 15 total completed. There are no more missions left to do except wrench in the works which did not pop up for me and is unobtainable.

The issue with the “Tunnel Rat” trophy not unlocking is now fixed. Fired up my PS4 Pro this morning after the November update, started the game and got the trophy after a few minutes. Thanks a bunch!

There is, however, a new problem - namely that the new trophies for the paid DLC are now part of the main game. So my 97% completion rating (I only needed “Tunnel Rat” and another trophy to get Platinum) dropped to 83% or thereabouts. That is somewhat cheeky and unfair for those people who don’t wish to buy the update.

Yeah, I am replying to myself 'cause I was being stupid and have been shown the error of my ways.

I just looked at the overall trophies and it appeared as if they are lumped together. However, when clicking on the specific game in the trophy overview the DLC is split from the main game.
Sorry for my rambling…

The only achievement that I need for the base game is (It’s the Final Countdown) which on my current save the mission (A Wrench in the Works) glitched out on me prior to the November Update which gave me the mission to do solo, but the achievement didn’t unlock. I did complete the mission in another player game, but I think it voided the achievement for me.