I’d really appreciate it if the devs would work in some kind of explanation for how and why we are notified of rivals. I like the idea of the rivals learning from other machines and from combat with the player, but the notification screen doesn’t fit with the rest of the games style and seems quite arcade like. How is the player supposed to have come by this very detailed information? I realize it’s a game and that everything can be realistic, but the game seems to lean towards trying to be realistic, in an alternate sci-fi universe sort of way, and that is why I think the notifications seem out of place and a bit immersion breaking.

Perhaps there could be a mission where the player finds a communication device that allows them to tap into the machines communication link and gain knowledge of when and where a rival is created. The rivals would perhaps, for the sake of lore, generate a unique signal which is why they are the only ones detectable by the device. Perhaps, it is in the form of a CRT terminal that when gained, would appear in all safe houses, just like the plundra does and that would be the only place that you could learn about new rivals. The green CRT screen graphics would fit much better with the setting as well.

Just an idea… Any thought?

I think the second part is a brilliant idea for the new DLC storyline. It also works in nicely with the opportunity to explore new machines, weapons, attachments, and gear.

Well, both the machines and the player appear to have a short wave radio, perhaps the fresh rival sends its name and reason for rivaling back to its “headquarters” in a non-encrypted voice message?

I would assume that the same goes for its status page that displays the rivals experience and home region.
But my “solution” does NOT cover the fact that we actually have a picture of the rival on the aforementioned status page…
And oddly enough, its a “pose” picture, almost as if the rival is trying to show its best side…
Perhaps the robots have a BBS (pre-internet, remember?

And it would be cool to be able to view the health status of each rival.
Let’s say you have a skirmish involving one or more rivals and you die or you decide to bail out or something.
It would then be nice to see the damage you may have inflicted, which could help you make strategic decisions on how to approach them later.

Check the rival profile: select the rival on your map and click “details” (if memory serves…).
There should be a graphical representation of the rivals damage level in there, think it was on the right part of the screen, but im fuzzy on the details… 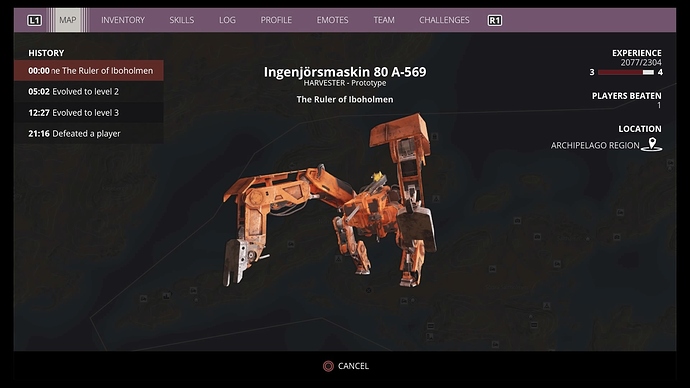 It would then be nice to see the damage you may have inflicted, which could help you make strategic decisions on how to approach them later.

Just use your bions, switch to the Tech View mode and look at the rival (need to be in viewing distance with clear line of sight). Bions then produce the rival stats, including it’s current HP (e.g Status: 100%).

If you also have the blueprint for that specific machine, then additionally you can view the HP of it’s different components as well.

Though, do note that when you damage the rival and leave it be and it levels up (max lvl4), it will heal itself of all damage you did deal to it.

Yeah, but I was thinking of the ability to read rival stats when selecting them in the map view.

That’s making the game too easy.

Maybe you’re right.
I actually don’t know whether I would find it useful or not.

(post withdrawn by author, will be automatically deleted in 24 hours unless flagged)

That video is intense!