I told people the end of the world was coming. My children, my little angel, Freya. Noone listened.

Now they fly over us. Killed most of the neighbors.

I dont know if they got my kids.

I banded with some other folk. Most too scared or too stubborn to leave. We put together resources and guns to hide out.

Figure out a plan to leave Sweden. That’s assuming the whole world hasn’t gone to hell with these things by now.

They had our flag. Our language.

What on earth is really going on here? 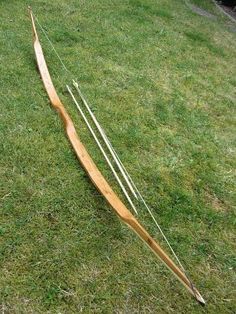 (Mollagabet bow. My wife used to call it ‘The Traitor’ since it was Danish in origin. But I have Danish in my blood, so I can’t help it

Never thought I’d have to come to this, but I started using my Mollagabet when going out for supply runs.

Bullets are running dry so some of us older folk decided to let the youngsters have them. They have more a future than we do.

Besides I was always much better with a bow in my hand than a gun anyway.

But this thing does nothing but piss the robots off.

Well… at least I have a way to distract these things so that my camp can take them out.

I remember a bow design I came across in a traditional archery conference I went to in Canada some years ago. It’s supposed to increase the performance and poundage at a smaller cost to my shoulder. 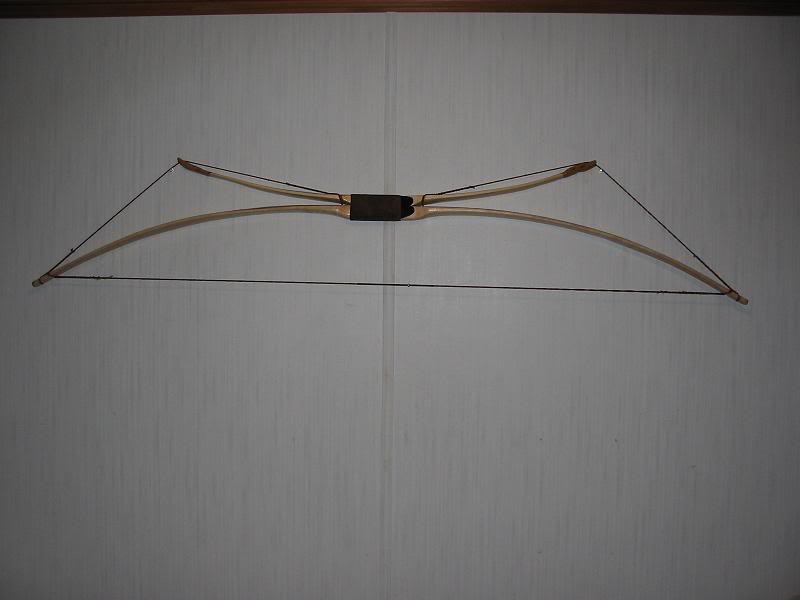 It would be nice to have some loud clunky bullets right about now though honestly.

I’ve tried the wooden design version of the design and it certainly goes faster but… Still bounces off. Elsa is telling me to just use a compound or a crossbow if I’m going to continue with this madness. I couldn’t control the sneers of disgust and feeling of insult.

And she’s right. I’m going to get myself killed.

-in different pen. Seems to be written some time later.-
I’ve worked up some sketches, those legs the monsters got gave me a good idea.

Bolted in pony limbs? I could made any handmade bow out in the field fitted to act as a compound with these artificial mechanical pony limbs. Maybe with this design, it could be even more.

Maybe it could be enough. Nic is an engineer, maybe I can ask him for some help. 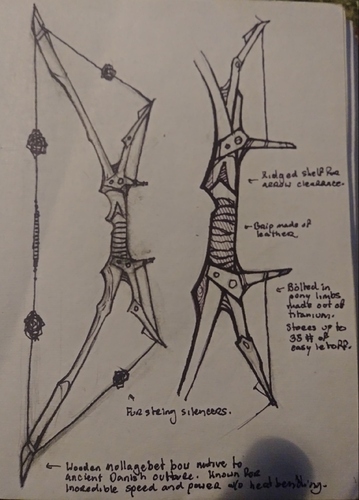 I’ve decided to design some broadheads to try and go through this armor. I know. I know! Just grant an old man something to do to pass the time.

Nic thinks I’m nuts but he’s willing to help me.

We decided to go with heavy aluminum, and a heavier broadhead. This thing is going to be dog slow but… As long as it gets the job done. 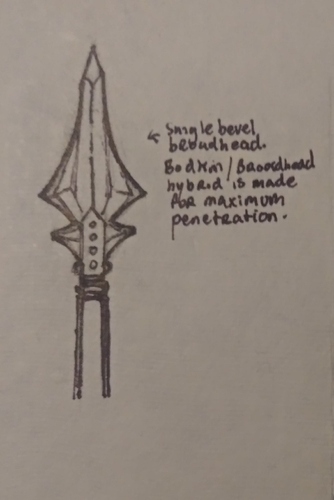 We took a robot from out the streets and dragged it back into the shed. Took a lot of breaks and some painkillers but we got it a… Few… Yards.

I took my bow with these machined broadheads. We got a pretty good dent but… No dice.

We penetrated the armor!!

And you should see what it does to the insides!

We shot it quite a few times to make sure.

The tweak worked without the Mollagabet cracking or the machined pony limbs failing. The aluminum arrow is a little worse for wear but nothing a little engineering wont fix.

Don’t let anyone tell you persistence doesn’t pay off. Got Nic so excited he made a design of his own; based it on his time in the military. It uses thermites to eat through the metal of tougher armor. He wants to use magnets to help it stay while the thermites do it’s job.

Not too sure how it’ll work but… We’re on a streak so far.

I was scavenging for some food and supplies to take back when I saw two of those dog looking things. One looked a little tougher than the other. Better upgrades.

Figured. I’m an old man. I had about 10… 15 years top before all this went down. Now I’d be lucky if I lasted five days.

I snuck up in them. Didn’t hear me much and the crap we put on limits their heat sensors.

I took out and lit one of Nics incendiary arrows and shot it at the tougher one, thought it would alert the other guy like what happened with the silencer did but nothing.

And the sparks THAT came out the arrow really messed with the both of them.

I shot my broadhead and it blew right through the other dog’s weak spot. Took a little more finesse to get the other one but I got a couple of broadheads right in the hole Nics arrow made and blew that sucker back to whatever Devil made it.

These old hands still got it after all, and the arrow is still in one piece with supplies for more.

But I gotta stop doing these runs. If the machines dont kill me, my heart sure as hell will. 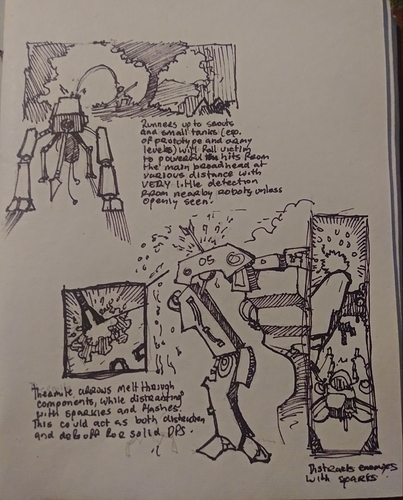 You never know how much hospitals are taken for granted until you no longer have them.

Nic and his wife decided to venture out. Some of the guys went out for a quick run and never made it back.

Me? I’m about to be taken out by the flu. At least that’s what I think this is.

Funny how that works.

Thought it’d be a bullet or some sort of smart missle.

If anyone finds this and those bastards are still out there, get a gun and take the fight to them. I hope you win.

But if you don’t have bullets, or you’re just a crazy bastard then…

Take my bow, and my notes.

It might look shoddy but… Believe me, it works. I’ve taken out a lot of those bastards with it.

The arrows fly fast enough to do the job. I even helped take out one if them tanks.

At least I’ll know, my efforts were good for something.

And if anything, it’ll be funny. A high tech machine fitted with the latest artillery being bested by a primitive piece of wood, some metal parts, a string and good old fashioned human ingenuity.

It’ll be a real slap in the face.

Now if you’ll excuse me, I’m going to go throw up in this bucket.

Really nice idea! Really cool concept, think this would be very cool to have and use. Especially the thermite arrows depicted.
Really great idea.

Very nice Community content. Story and drawings. As if the invasion of machines was not enough hardship, people also had to worry about 1989 influenza epidemic. The winter cold and not having enough to eat isn’t helping either. Anyway, hope the old guy pulls through. Like the Vorts would say, “Be adequate!”

This is outstanding work and effort well done.