1:skill tree
first i think the skill tree should be removed from the inventory. actually I think the inventory should be redone. when i press tab (or whatever your inventory key is) I have options to see a giant map of the entire game, i can look through the logs of what I’ve done and all I’ve collected, I can look at my hundreds of kilograms of ammo and materials and guns and med kits.

for missions, collectibles, logs, i think the player should have a notebook. you can look through this notebook to see what you’ve found and done.

the map would be inside the notebook, but not as one giant thing showing everything there is. having the mystery of the world is one thing that makes the game scarier and cool at the beginning, so instead, you would find map fragments around the world as you go, and would put them inside your notebook. by the end, you would have the map you start with.

for your general inventory it would be a mix of the old slots and the new weight. 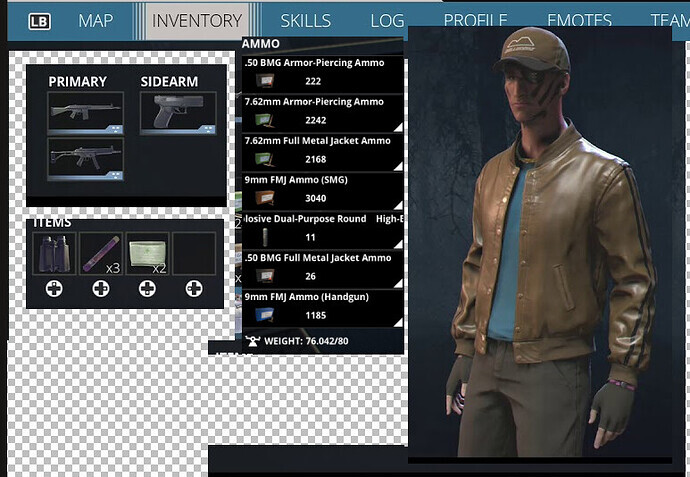 your ammo crafting materials and other equipment items would be in different categories like they are now, but not guns. you would be able to carry 2 main guns and a sidearm. the guns would show on the players back and side, and instead of your hands just disappearing and having a new gun you would get an animation of you grabbing a new gun, but not slow obviously that would be annoying they would grab it as fast as they can.

also press a button to not hold anything.

the skill tree would be much different. instead of having to repeat base defense missions to get experimental schematics you would research them at a research table found at safehouses. to research them you would need fnix intel or something like that. you would get it from killing rivals and destroying fnix bases. it wouldn’t be an item, more like a point thing you collect. using this and some materials you can research items.

skills like the engineer or hacker or whatever is pretty useless. all you do is get a small chance to get a robot to attack another one for a few seconds. then they instantly know your location?

no. the resistance pack 2 is adding a bow. its supposed to have explosive arrows or something, this brings a new thing though. instead of hacking with binoculars, the skill would let you craft hacking arrows. if these arrows are show into a machines head or wherever its computer is, it will turn against its fellow machines until it dies or the arrow is shot a few times. rivals can not be hacked.

rivals…
many people have made great posts about rivals and how they could hunt players and do cool stuff so you don’t really need to see me say it too.

also, currently you unlock safehouses and always spawn at one. maybe instead you could start in a house or office or whatever building you logged out in. would feel more like my character went to sleep instead of just teleported somewhere else when i left i guess. if your in a fight or just the random forest though you should go to a safehouse.

also to make it more kinda creepy maybe the camera could look a bit darker idk if that makes sense not like the world be darker idk this is kinda confusing
edit- ^ maybe be able to apply the camera settings in photo mode to your general gameplay camera?

edit- arm slider. currently your hands are like 2 inches from your face maybe a slider to control the distance your arms are?

probably will add more to this later idk kinda long

for missions, collectibles, logs, i think the player should have a notebook.

Oh my god… The game takes place in the 80s.
Do you know how laptops looked like in the 80s?
And, with such a laptop you would need to leave (actually) 4 guns at home. Weight is about 8kg, weapons in the game have a weight of 2kg. Yes, of course, apples and pears…

Do you know how laptops looked like in the 80s?

Where does it say laptop?

You realise a notebook is a little pad, often ringbound with lined paper that you write in with a pen (or pencil) and weighs next to nothing.

He’s talking about sticking paper maps into a notebook and annotating them with a pen. At least that’s the way I read it, but then I’m in my 40s and was a teenager when GZ was set.

im sorry but i really dont understand what your saying

And, with such a laptop you would need to leave (actually) 4 guns at home. Weight is about 8kg, weapons in the game have a weight of 2kg. Yes, of course, apples and pears…

could you clarify this

I believe they misconstrued a paper ‘notebook’ with a type of laptop.

(I think) they’re saying how a laptop in the 80s would have been huge and heavy, reducing the amount of items you could have in your inventory, forcing you to carry less weapons.

ah thank you. i meant a paper notebook that would store all your information. i think instead of an inventory just appearing on your screen an actual thing is a bit more immersive i guess

I know. I totally got that, but I’m old and still use a pen and paper for taking notes all the time. (despite being a software developer who doesn’t go anywhere without his smartphone / laptop.

Yes, I indeed missunderstood it