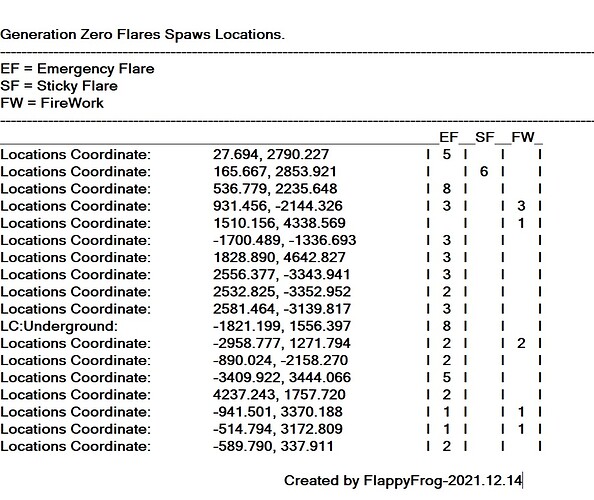 If you fancied another project, there seems to be a shortage on adrenaline hotspots since Resistance.

i take a look on it…

There aren’t any respawnable hotspots for Adrenaline anymore after the 2021 May-Update. Only the one time pick-ups.

I found 3 places so far and i now alot more.

Will be updating Flares letar on and make a new one for Adrenalin hotspot.

Can you tell me one respawnable hotspot coords for adrenaline that you have picked up, and it respawned back after restarting the game?

We could open this up to the community - start a pull of all of them?

Restart the game do not work, need to wait more.

With the last resistance update in Forest region, I picked up 2 stims, that were on a flat roof at a bed in Gamla Stan. I picked them up months ago, but they have never returned. The Devs told us that persistent stims that were laying openly in the game world have become one-time-pickups with the resistance update.

But maybe they have different rules for some of them. So how long do you say/think before that stim on Måsskär will respawn?

you right it will not pop up, damit

Yeah, I thought so. Still it great to see a list of all stim locations for new players or players who started the game anew to reference. I have many locations on my MAP 3. But I’m sure I haven’t listed them all. So if you find more just show them.

Map of the GZ world with labelling

MAP 3: My personal map, which I made as a memory help, with Locations, Regions, POIs, and Beacons, and a lot more.
https://drive.google.com/file/d/1cHVHrSyLV2gV-Y1gPVrZ10Ai1fAiAvbM/view

Have a theory about another project that I will try about ardenaline.

I am all ears…

Yeah let us know bud, me and Bert love a project

Tried to loot a dead man on the ground several times who has adrenaline, but even that did not work. After two days of waiting, his loot has not returned.
So I do not know how to get them easily. This is the case if you play online and someone can give away their adrenaline if he has many.

Gave away 50 adrenaline a few days ago.

Has run a new theory on adrenaline.
And what it has noticed is that if you only wear one adrenaline, it’s like the game notice that you need more and to 90% you get new ones when you loot dead bodies and check large boxes.
You can have as many as you like in your box, I have 100 but when I do this trick I get new ones all the time.
So it can be a trick to trick the game to get more adrenaline, it works for me.
Even the reaper can give you up to 4 adrenaline but it is a small chance to get it and then it is important that you do not die.

Have a Nice Game