I went into the stats of all the guns in Generation Zero and put them into a tier list, taking into account their place in the meta, take a look and tell me what you think! https://youtu.be/crMarYYpVhk

It’s a good video, but I have a few pointers;

First of all; You’re not going over all the guns. The differences between the Experimentals and the normal ones as well as the different tiers vary wildly. All the weapons you’re testing out in your video are endgame quality which is great if you are in the endgame, but not so much if you’re working your way there.

A new player might not know that when you refer to the Experimental M/46 Kpist as simply “The Kpist” even though there are an additional 5 tiers of quality below that.

Secondly, some weapons are very situational. The Granatgevär works great against groups of enemies, regular shotguns use different kinds of ammo, etc. Don’t call them off as being bad just because you can’t find any ammo, which brings me to the next point.

Adding to that layer, the use of different kinds of ammo affects performance of the weapons vs the type of enemies and how you choose to fight them. Add the skill perks to that for even more variation.

The Möller is a joke, though. I wouldn’t go into combat with that peashooter

The Möller is a joke, though. I wouldn’t go into combat with that peashooter

Hey now, we have all been in combat with one before

Thanks for the feedback! I did take most of this into consideration, testing shotguns with all the different kinds of ammo and more comparing the proportional stats and uses of each weapon, commenting on how some weapons (Meusser, Magnus etc) are best used for runners with the one shots while things like the AG 4 and Kvm 59 are best used for larger enemies. Some ammo is still rarer than others even while carrying the gun simply due to the map layout, with ammo for the Magnus and pvg not spawning in the lower half as much as players won’t have a Magnus or pvg at that point. However thanks for the advice on telling new players that they are the end game rarities, I’ll try to make that more clear in the future

Besides what Xezr said, there are some skewed results shown in the video as well.

For example:
1st test with 5* Möller.
You show the viewers apo tank (the strongest machine in the game) shoulder joint armor plating but you are shooting at it’s battery back, well below shoulder joints and when you view the tank HP again, the shoulder joint armor is still 100% since you did not shot at it.
Also, Möller’s Hollow Point ammo isn’t designed for armor penetration. It’s designed to shoot at exposed components.
Btw, you can extend the ammo capacity with mag mods and for Möller, 5* mag mod brings the ammo capacity to 16, double of what it initially starts out with.
Oh, i also killed my very 1st proto harv with my 2* Möller, so, it isn’t “that” useless of a weapon.

2nd test is with 5* .243.
If you were to use FMJ ammo, instead of SP ammo, you would’ve seen better results against hunters. Again, different ammo type matters.
.243 and .270 are great weapons when used with silencer since they play very well into Sneak & Snipe gameplay style. But for Run & Gun, where only factor is DPS, neither of the two weapons are good.

3rd test is with 6* m/49.
Here, i hear complaints of how many rounds it takes to take down hunters/harvs/tanks. Thing is, m/49 is shooting HE (High Explosive) ammo and there are best against groups of machines, rather than single target. For single target, we’d need AP (Armor Piercing) rounds, which have been asked in the forums several times now.
Moreover, different difficulty level gives machines different HP pool. On Adventurer difficulty, you will spend far less HE rounds than on Guerilla difficulty, when taking out the same machine. But of course, you didn’t mention that.

4th test is with 5* .44 Magnus.
While it is a revolver with only 6 rounds fired before reload, it’s ability to take scope and any vision mod gives it unique abilities among other handguns. .44 Magnus with scope and vision mod is very precise sniper at any time of the day/night. And with silencer, it plays very well into Sneak & Snipe gameplay style.
Besides sniping, i’ve also used my .44 Magnus to locate destroyed machines in shrubs with IR or OPV vision during the night.

5th test is with 6* 12G shotty.
The whole idea of shotguns is that you need to get close to use them since they are close-range weapons. And for 6* 12G shotty and it’s different ammo range; it has been tested before with following results: birdshot - up to 50m, buckshot - up to 20m, slug - up to 5m, before explosive flechettes explode in air.

8th test is with 6* Kpist.
In your video, you say that: “However, the low clip size also makes it harder to kill multiple enemies, without getting shot at in return, while reloading.”. Thing is, it’s seen in your video that you have 5* mag mod with 6* Kpist, bringing it’s clip size to 51 rounds. That makes Kpist to have 3rd biggest clip size in the entire game. On 2nd place, we have KVM 89 (200 rounds with 5* mag mod) and on 1st place, we have KVM 59 (250 rounds with 5* mag mod).

And final commentary is for 15th test, with AG5.
It seems to me that you took the weapon damage, fire rate and handling stats directly from GZ wiki. Thing is, GZ wiki is outdated and weapon stats there haven’t been updated since the game launched more than 1.5 years ago. Things have changed since then and AG5 does not have the highest damage rating of assault rifles. Instead, AG5 is almost equal to Klaucke when it comes to the damage. AG4 is the one that has highest damage rating of all assault rifles and equal to KVM 59.
So, if you want accurate info, look for in-game stats: 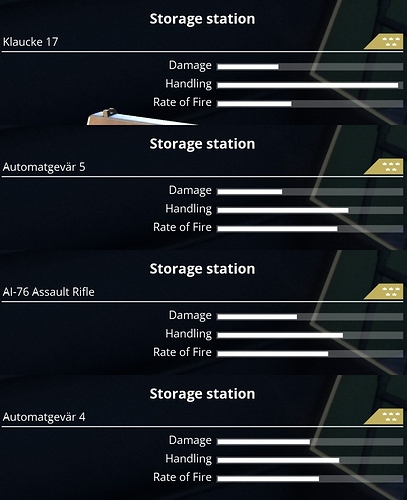 Another thing is with Kpist and HP5. Back in the launch day, yes, HP5 had better damage per bullet than Kpist, but had less rounds (30 vs 36 base) and a lot more recoil, which is also seen in GZ Wiki. Back then, it was a great SMG, if you could manage it’s recoil (semi-fire mode helped a lot here).
However, at some point (not sure exactly when, but my guess would be either in June '19 or August '19 update), devs switched things around.
Now, Kpist has higher damage per bullet and more recoil than HP5 (if you look in-game stats). Why devs switched things around at some point and didn’t say a word about it - that i don’t know.

Still got a sub, though. I want to see where this channel goes.

Thanks for more feedback! I agree that I should have classified the difficulty and went more in depth into the different ammo types for the .243, but for the Moller, it was mainly a joke to show how bad it was (and to be honest, it was one of the last guns I had to record and I was getting lazy). Also for the m/49, thanks for the advice about shooting it at more lower class enemies, but I would still put it around the same place in the tier list due to its heavy and relatively rare ammo and redundancy as a gun when you can just use grenades as a CC or just use a normal AR. I placed the Magnus low due to its place in the meta being completely replaced by the PVG as the PVG is a necessary gun for any playstyle pretty much and it can do everything the Magnus can. I did go into depth for the different ammo types for the shotgun (look in the top right corner while I’m in the shooting range) and I got similar results and I comment at the very start about how having to get close is why they’re placed lower down. The Kpist does have a relatively low clip size due to its high fire rate, especially while in overdrive so that’s why I said that, but I probably should have been a bit more clear in the video. Finally, you’re definitely right about the HP5 and AG5, thanks for telling me!
In the end, it’s hard to tier the guns with absolutely everything considered so feedback like this does help alot

In the end, it’s hard to tier the guns with absolutely everything considered so feedback like this does help alot

I do to some extent, commenting on how the PVG is very loud and so shouldn’t be used for a sneak build while the .270 is better for a sneak build, but I could and should have gone more into depth about the different builds.