How do YOU beat Harvesters and Tanks when you first saw them?

So yeah. Relatively new player (about 12 hrs in game) and I’m just leaving the archipelago beginner region. Crossing the outpost to enter the farmlands region, and what do I see? Oh, you know, just like 3 TANKS and a HARVESTER mucking about. So, as a more experienced player, how would you deal with that? Keep in mind, I am just leaving that first region. I got a 1 star AI-76, 3 star smg, 2 star handgun, 2 star shotgun, 1 star m/49 (the bazooka thing). Oh yeah, a 2 star .50 cal in storage, but I don’t have much ammo. So, with all that, what’s your tactic?

How did I beat my first tank and harvester? Didn’t! Got killed HAHA… I love that joke.

My first attempt on a tank was to get close… then learned about the massive concussion blast. Second attempt was run and gun, it work mostly but the mortar it kept firing would always hit no matter how far I got away from the blast. Third was to keep running at it, fire til I died than repeat, it did die in the end.

I tried rockets once but it just brought more of them and I kept running out of ammo. Started to avoid them as much as possible.

You have better gear now than I had when I began! ( October 2019).
There were no good weapons at the archipelago to find back then, basically I had some grenades, a pistol, a shotgun hunting rifle and a sub-machine gun and I used to lure them to explosive canisters and take down their weapons first, and wasted most of the ammo and then i had to find more.
Now…if by any chance you are playing on the PS4, forget it, just get better guns because of a certain bug their missiles are way too fast.
Newcomers now have a lot of weapons in the archipelago to find that could only be found later in the game.

@HoneztMistake You’re not supposed to be able to take them out right from the start. Avoiding them is a viable tactic. Tanks at least, require a large amount of ammo to be taken down, and a lot of practice in dodging their attacks. There are however a few ways.

Plinking at them with the weapons you got is no good. Sure, they will go down eventually, but it won’t be worth all the ammo you spend on doing so. If you want to try anyway, always shoot exposed components where you see blue sparks upon impact. Blue sparks - critical hit / Big, yellow sparks - good hit / Small, yellow sparks - armor hit. (HEDP rounds and hand grenades are most effective against tight groups of small machines, but work on the big ones too, of course.)

Your best bet, if you really want to try taking on the big game, is placed explosives. Land mines and gas tanks! A prototype Harvester or Tank can’t take many of them. It’s been a long, long time since I tried this, but last time I tried, a tank died from 2 or 3 landmines. I hit him with an EMP cell, ran over and placed 3 mines between it’s feet, and retreated. When he moved again, boom! You could also place a cluster of mines and gas tanks, and try to lure the Tank in to step on it, either by radios and flares, or by getting it to follow you, but don’t stand close to your bombs, or it’s rockets will destroy your trap and kill you as well. This might require a bit of thinking to pull off, but it will work of you get it right.

When you’re stocked up enough to use your .50 cal, you can use it to shoot off the Tanks main weapons. He will try to run you down once his weapons are gone, but if you practice dodging, or you have a house or something for cover, you’ll be fine. BTW, houses are good to fight from no matter what machine is attacking you.

For my own part, I avoided a lot of fights early in the game. I went from the Archipelago to the South Coast, which probably isn’t the smartest choice. Should have stayed in the Farmlands a bit longer. One of the things I remember best from early in the game, was trying to take out a military Tank in Kålleby on the South Coast. He was in the middle of the city, stomping through the streets. I think I fought him for over 30 minutes, running around trying to place explosives and pew-pew’ing at him with my flimsy weapons. I used up all my medkits and all my ammo, but I won in the end, right? …no, the Tank won. I gave up.

Good luck hunting Tanks and Harvys. You’ll get the hang of it. Trying and failing is an important part of early-game Generation Zero, but you always learn from your mistakes, and find a better way next time. No other game that I can think of has had a more enjoyable and rewarding learning curve than GZ.

My first big Machine encounter was with a Proto Harvester and it’s Runner escort at Saltholmen Church.
All I was armed with was a .243 Rifle, a rusty 'ol Shotgun and a couple grenades. I had no idea how to take such a big Machine out, but I managed to do it by sniping from the church. 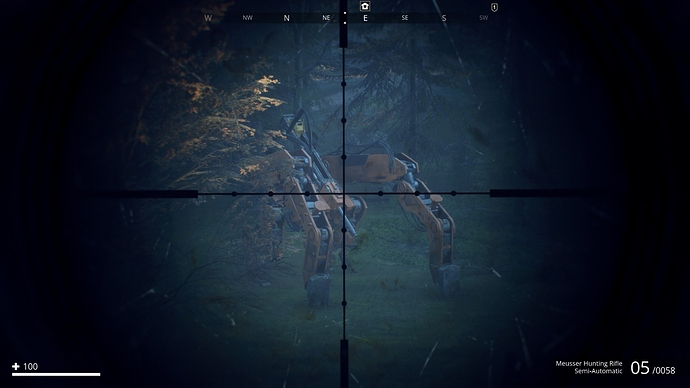 Took a ton of really small bullets but down it went

So, I figured I should at least post how I dealt with it. The breakdown is 1 prototype Tank, 2 Military Tanks, and 1 Military Harvester. So, after spotting them, I took some time to loot the outpost. When I looked back, the Tanks had wandered off, and it was just the Harvester.

I ran out and threw down some gas tanks to try to trap it, then ran back in the outpost. I found some cover, and opened fire. It immediately started stalking towards me. So, I was behind cover, reloading, and all I heard was some whistling, then the world exploded. Yeah, I didn’t exactly know what Harvesters did. Bad call.

Now that I know I picked a fight with a goddamn artillery barrage, I ran up to it with my smg, thinking it would have a hard time targeting me up close. Yeah, turns out these things are a little gassy, bad idea. So, I find its max gas range, then start running circles, pumping in lead and dodging the missiles (they are pretty easy to dodge, if you stand still and don’t start sprinting till they fire). Then, all of a sudden, I start getting chewed up by machine gun fire! THE GODDAMN PROTO TANK CAME BACK!!!
I fricking SPRINTED to the outpost, desperate for cover. After I got in cover and healed, I started using the mountain and bunker safe house for cover, popping out to shoot and dodging back every time I heard missiles or machine gun fire. SO begins a battle of attrition. About 500 FMG 7.62 rounds, 200 AP rounds, and 5 or 6 HEDP rounds, both Harvester and Tank are down.

Thankfully, the Military Tanks didn’t come back. Ended out looting some misc materials, a 4 star magazine for my AI-76, some more 0.50 ammo, and replaced my HEDP rounds. Not that bad, considering all I’ll need is to loot some dead militia members or kill some Hunters to get back my 7.62 ammo.

Honestly, I think the most important thing to do is choose your location. By luring the enemies to the outpost, I was able to avoid almost all of their attacks, while still damaging them. If I had pulled more gas tanks and mined the entire area, the fight would have probably been over sooner, however, I have found that the AI generally doesn’t go where you want them to go

Oh, you know, just like 3 TANKS and a HARVESTER mucking about. So, as a more experienced player, how would you deal with that?

I’d avoid them and go around.

GZ isn’t a game where you need to shoot everything that moves. Instead, you need to pick your battles.

But for tips of taking the bigger machines down, i have two:

I was at a church when I had to log out and make dinner. When I logged back in I was immediately in battle. I heard a bunch of noise and ran outside and immediately saw huge legs. Ran back inside losing almost all my health. I had just found the rocket launcher and had 4 rounds.

Pulled the launcher from storage and fired 1st shot. MISS! and I died. Respawned back at the church. Reloaded, fired again. Direct hit. I died again. Respawned, launched another. Decided to toss a flare away from the door and out the side window. Flare hit the window side and fell to my feet. Died again. Respawned and launched the remaining rockets at the beast. Barely scratched it.

Ran out doing suicidal shotgun runs at the beast, dying on each run out. Ran out if shotgun ammo and switched to pistol with very limited armor rounds. SUCCESS! As soon as it exploded, 2 more missile barrages came in and killed me. It was one of my first run ins and after killing it, I could not go to its body. I do not even know if it was a tank or a harvester is the sad part. Was my first time and could not identify. Logged out and went to bed. Came back the next day to low inventory and had to go looting all over again.

Was a good day.