Does anyone know if the devs purposely made the inventory management slow and clunky on purpose in an attempt to add “realism?”

I’m fairly new to the game but it’s gotten to the point where I need to access items in my inventory fast under pressure and the fact that the game doesn’t pause while in the inventory screens just adds insult to injury.

PC players mention “hotkeys” often, and I guess that translates to the D-pad on consoles, which only allows for 4, and that ain’t cutting it during heated battles.

So have the devs addressed why they are sticking to this design? Or hopefully mentioned an improvement is in the works? Even an extra layer on the D-pad for a double-tap 2nd inventory ring would be welcomed. And if people like they way things are, make these new improvements optional settings to toggle on and off.

The game has been out so long now that I assume if the devs wanted to improve this for consoles they would have done it already. So I’d at least like an explanation on why it is this way.

So I’d at least like an explanation on why it is this way.

“Why” comes from the many player requests to change the old grid style inventory into something better. 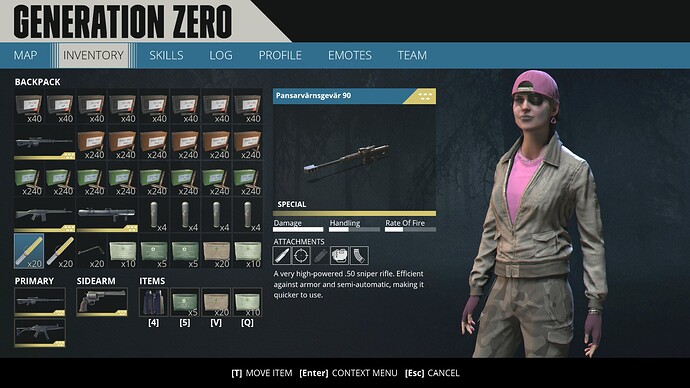 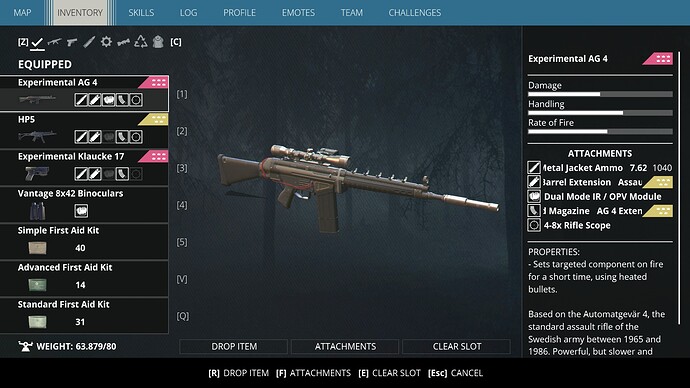 Inventory Update
Alongside Crafting we’ve taken the opportunity to give the player inventory a bit of a facelift. There was a lot of feedback around this one in various forms and something we spent a bit of time thinking about how to approach. In the end we looked for something that would be more convenient to use, easier to understand, and less technically complicated - something that we think people will be used to and appreciate. Going forward players will now have lists of items in categories and your inventory will only be limited by item weight. No longer by number of items! Additionally we’ve done away with the stack limitations so you more easily manage all of the items you have! Just like with Crafting, this is new to you all and we’re very much open to your feedback on how it’s working.

On PC, you can switch weapons fast, if you learn the controls. From another topic:

Tools are there, now it’s just the matter of getting hang of it.

May I ask how many items do you need for the d pad?

I have 2 on mine. Up for binoculars and right for med kits. The other 2 are empty. I do put items in there put it depends on what I’m doing. Mainly for completing challenges. If I need 3 items for a challenge I switch out my med kits.

I really don’t think they need to bother with this. I think time would be better spent on other things for the game

New inventory is very inconvenient because:

Only 2?!! Wow. I usually load up with meds, binos, flares, and fireworks. But I’d also like quick access to an explosive, an EMP, a sound distractor, and smoke screen throwable at bare minimum to make quick strategic decisions on the fly, especially when I’m running and under fire. This method of going into inventory and assigning things to the D pad before you can use them is just atrocious for console players. If you can enjoy the game with only 2 items assigned, kudos, but the 2 other console players I was with last night feel the same way I do. Adding a secondary ring layer to the d-pad to double click to would solve the problem and ad 4 more slots making 8 total. Or at least pause the game during solo play when in inventory. (I realize that wouldn’t work in multiplayer.) As for saying you don’t think they should bother with this…well…I completely disagree. Glad it suits your play style though. Cheers!

Thank you for the detailed info. Making this a PC game first and a console game as an afterthought explains much of this. So this tedious slow system on consoles is not to add “realism” to the game simulating rummaging through your backpack to find an item like you would in the real world. Good. That means there is an opening for improvement.

I have never used smoke grenades. Never found a use for them. I did at one point use flares, but most of the time the machines ignore them, so I just stopped bothering with them.

When I am doing challenges, I do put items in the other two slots. Personally I just learned to use what we have. I know you don’t agree and I’m sure others don’t agree with me either.

I would rather them spend time fixing crashes/ freezes. I would also rather fix it where you fall through the map and all of the rivals in that area fall through as well and die , that also resets the level to 1 and a score to 0.

Them spending time putting more in the game to do, more experimental weapons to hunt down, new machines to kill, the ability to respect skill, get rid of some skills that don’t make sense in the game ( scavenge, the xp one) maybe even letting us be able to use our skill points better. So if you put 2 points in the first one it opens the second and third, instead of having to use points in something that is useless and won’t be used.

Those are a few things that I can think 9f right now. Personally I would rather the time and resources to go towards something like that.

Also you did say 2 other players that you play with feel the same way. With 3 of you in the game that does give you 12 slots combined.

I know you won’t agree with this, but that’s cool. We all have different wants, but it still comes down to what the devil want in there and what works with their future plans for the game

I think there is absolutely no problem in defeating robots with just one weapon and a pharmacy, but that’s not the point. We share the view to make the game better, to attract more players and, automatically, for the developer to create more new content.