Is Elon Musk behind FNIX or has van Ulmer worked for him? 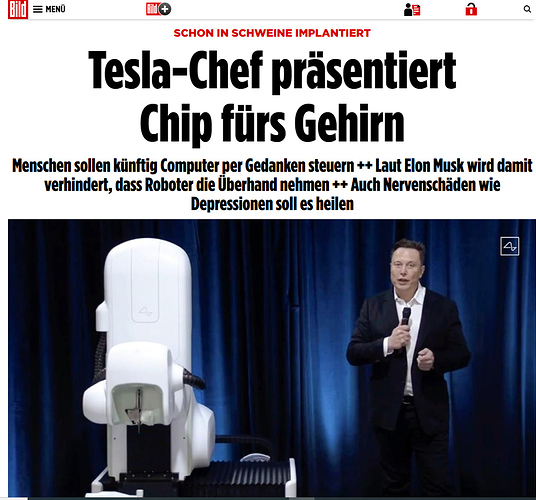 In the future, people should control computers with their thoughts +++ According to Elon Musk, this will prevent robots from getting the better of them +++ It should also heal nerve damage such as depression

The complete Artikel read here, for all non germans read the translation below.

It sounds like science fiction, but it’s already a reality for three pigs: a chip that people could use to control computers with their minds in the future.

Tesla boss and multi-billionaire Elon Musk (49) presented his brain chip at a video conference on Friday. He showed three pigs in which the chips of his startup Neuralink were planted. Nerve impulses from the trunk of a pig named Gertrude were transmitted to a computer via a wireless Bluetooth connection.

Folks that is not a joke

What do you mean Elon Musk is von Ulmer’s cousin. Of course he’s going to help out his cousin.

Well, to me, there is no surprise with Musk’s claims since the brain-computer interface (BCI) seen in GZ is present in the real world.

Also, Musk isn’t the 1st one in the BCI field nor is he the 1st one with breakthroughs in BCI. There are plenty of people before him who succeeded in BCI.
Further reading: https://en.wikipedia.org/wiki/Brain–computer_interface

Yes, I agree with you Aesyle. These attempts have been around for a very long time, but in the 1970s there were not yet such powerful computers and computer chips available. I think this development is good in terms of the fact that if people have lost limbs in an accident or are paralyzed on one side by a stroke, they can move again by transmitting the brain signals via an interface to a prosthesis or to the corresponding muscle parts.

Back to the game. We see that it’s not that far from reality.

I like this theory, as I may have used his voice in Uncle Calle