Hello, I’m a new player who just bought the game during the steam sale. Until tonight, the game’s been pretty good fun, with challenging fights and reasonable enemy spawns. However, recently the enemies seem to have multiplied by a large margin.

About an hour before I reached the air base, I encountered my first tank, a military class, protected by ~3 hunters and began to make preparations for a big fight. During the fight, I noticed that there were many more hunters than I had seen before. By the time I killed the tank, I believe I had killed about 8 hunters along with a few dogs that had come running in.

I have read that tanks can call in reinforcements, but calling in 5 hunters seems a bit much imo, especially in the early-mid game. Still, I chalked it up to the game making a challenging fight and that perhaps the spawns were just kinda clustered around the area, and went on my way.

About an hour later, I got to the air base, saw 2 FNIX tanks, went “nope” and tried to make my way to the farmlands bunker. This is where I saw 3 FNIX hunters on my trail.

I thought that it’d be a relatively easy fight compared to the tank earlier, and began to target their guns to force them into melee. Then I saw another hunter. “Maybe he was just in the bushes,” I thought to myself. Then I saw another. And then another. At this point I started to shoot at them while running away, but it was too late. The horde was approaching and growing by the second. I didn’t get very far before getting overwhelmed by the machines.

I chose to respawn at the safehouse at the air base, where I took the picture below. 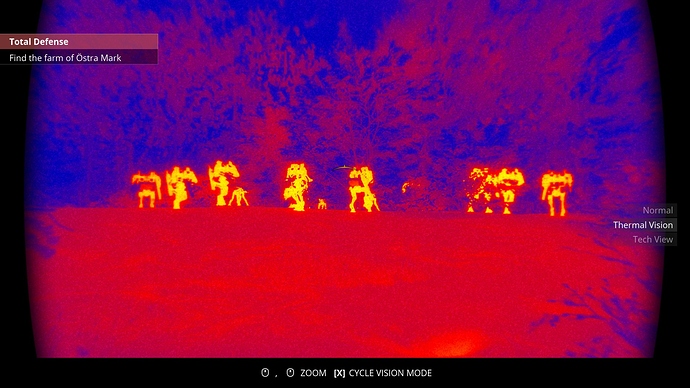 I’m pretty sure that the only way to take care of that many enemies, solo, would require me to be in the endgame. Honestly, idk what I’m hoping to achieve by posting this, I guess I just wanted to vent and/or get some advice or help with killing them.

If it makes any difference I’m a level 11, a solo player and the highest tier I’ve gotten to is three-star

tl;dr - I tried to leave the air base and 8 hunters jumped me, send help

Best course of action is evaluate situation and if needed, avoid fighting. You probably would have chance to fast travel away, before you get noticed by machines.
After that it gets difficult. Lures & decoys help to slowdown enemy chasing you. And RUN!

Specialty of this game is there are fights, where you can be seriously be out gunned & get your ass whooped. (got my ass whooped 8 times to day in 1 fight, i have ever never ever died this many times in combat. playing guerrilla difficulty. Roughly 1 death/h when i play)

“He who fights and runs away
May live to fight another day;
But he who is battle slain
Can never rise to fight again.”
― Oliver Goldsmith

Since November '20 update, the entire Farmlands is overpopulated with machines while Archipelago, South Coast and Himfjäll are at normal levels and the rest are essentially void of machines.

GZ isn’t a game where you need to kill everything that moves. Instead, leave the hotspots of machines alone and go somewhere else. Once you have the know-how how to deal with machines better + plenty of ammo and other supplies, you can take the armada on in hopes of increasing your winning chances. Until then, it’s pretty much suicide and waste of supplies to take the armada on right now.

What you are experiencing is completely normal. An important part of early game GZ, is to carefully consider when to fight, and when to avoid enemies. The game has no “scaling”, and it randomly generates groups of enemies as soon as you leave the starting area (Archipelago). Part of the excitement when you see a new, powerful enemy is to choose if it’s worth the risk to take them on. A FNIX Tank can drop a 5* weapon, but you may not have the equipment to defeat him just yet. Always weigh your options.

You don’t necessarily need end-game weapons to take on a large group. Your best weapon is your skill at playing the game. Everything depends on how you move around in combat, how well you aim, how well you know what machine components to shoot first, your knowledge about what weapons are best suited for each situation, and how well you utilize the terrain and your utility equipment. It’s a lot to learn, but boy does it feel rewarding when you finally master it!

My first tip to you is: Be aware of the lvl. cap of 31. You can spend 30 skill points in total, and there is no way to respec them once you’ve chosen, so choose wisely.

alright cool, thanks for the help my dudes