Letter from the Team - May 29th

Given this time in the month you can likely guess that there is no game update from us for May. We needed to give ourselves the time to focus and prepare for future work on the game. This includes the feedback we received from you all based on the last update as well. We hope you understand and will bear with us just a little longer!

That said, if you’ve been following our channels, you may have read Calle’s latest post on the Östertör-net BBS where he said that he was going to write a letter to the editor of Dagstidningen, and sure enough, he did! And we got our hands on it early: 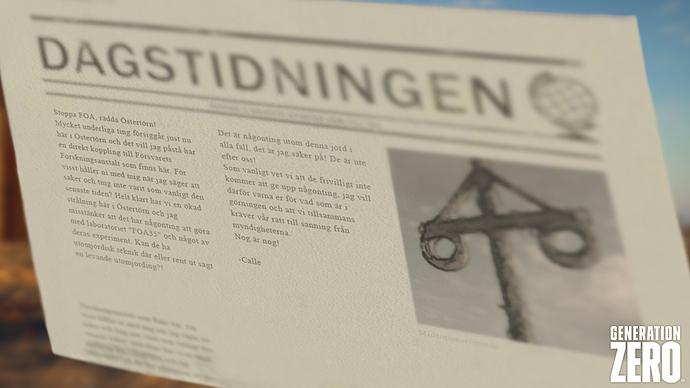 Very strange things are happening right now in Östertörn and I want to claim that it’s in direct connection with the Försvarets Forskningsanstalt placed here. Wouldn’t you agree with me when I say that things haven’t been usual lately? We’ve definitely got increased radiation here in Östertörn and I suspect that it has something to do with that laboratory “FOA35” and one of their experiments. Could they have alien technology there or plain and simple a real living alien?! It’s something out of this world for sure, I’m certain of it! They are after us! As usual we know that they won’t give up anything, so I want to warn you what’s in the making and that we together claim our right to truth from the government.

Keep an eye out for other bits of information in the coming weeks as we head into summer. Until next time, stay safe out there!

Thanks Pontus, see you Wednesday

Good stuff & thanks for keeping the community informed!
SPP

Looking forward to the great stuff you guys have in store for us!

Keep it friendly guys, or we’ll be locking this one a lot sooner.

Can’t wait! I hope everyone on the team is staying safe and healthy!

Your weekly streams and unfailing newsletters only tells me you have been listening to your community and showing great strides to stay involved and keep everyone interested for future plans. Thanks for all the hard work you and your team have displayed over the past months. Keep up the good work!

I really hope we still get 2 updates this month (or a bigger update). But I understand with the world’s current situation, that my not be the case…

I truly don’t understand why a hotfix can’t be issued right away to fix the missile travel time - seriously???

But I understand with the world’s current situation, that my not be the case…

You mean they are unable to develop anything because they are working from home? Seriously? Devs are best adapted to WfH situation, they barely need physical meetings.

Didn’t Pontus say in a stream that they were able to work at 100% efficiency, even though they worked from home? I just hope they’re taking their time because the results are gonna be worth it! But damn, I hope they get it right this time. I really want to play GZ again, but not before the update.

Yeah I love the game but when those hunters start falling out the sky…thats all she wrote and they just keep coming. I’ve run forever and a day and can’t shake them. Hope it’s a good update and patch. Have they given in hints as to win it will drop?

True, i don´t get it, why didn´t they just sent a hotfix for that in May?
Many people have given up on the game, it´s been almost 2 months,and it´s the only thing that really needs fixing ASAP, other bugs and improvements could wait for “june” update.

I do not mind one or two it makes Harvesters less of just another easy farming object & gives them some reason to be there. That said in my stream the other day I had eight of them at once on medium difficulty…That was just not any fun,
SPP