Letter from the Team - September 18th 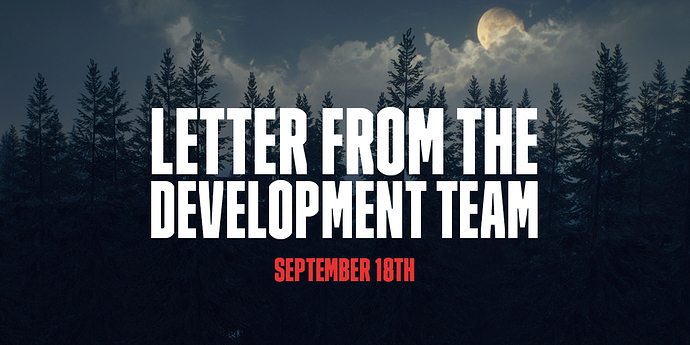 Update time! We have two urgent things to talk about, one on each console, so let’s get to it.

For our PS4 fans out there - Our excitement last letter was a bit premature. We ended up running into more challenges after we jumped what we thought was the last hurdle to stabilizing a build. Just like we mentioned last time, ups and downs with this set of issues. So this time around we’ll be a bit more muted in our optimism, but we are making steady progress. Still no ETA sadly, but we’re dedicated to making this update as stable as possible!

On the Xbox front, we’ve made some serious progress with the issues players are having at game startup. For ongoing information, you can check out this thread: [XB1] Game Crashing (post update FNIX Rising)

The short version is we’ve discovered what the issue was and think we have a preliminary fix. We’re currently testing this as much as we can to make sure we got it right so that players aren’t losing any of their save data. Things are looking good, but we aim to be thorough.

That’s all from us this outing. We’re heads down on these issues, doing our best, and going as fast as our small team can.

Thank you as always and we’ll talk again soon!

Nice to hear some feedback from the dev team, even though there are no set dates. Still, it’s a good reminder that dev team is hard at work, fixing issues.

Cheers for the unsung heroes from QA team!

Sorry I can’t join the ever cheering fan club on today’s “news”: Why, Avalanche, can’t you roll back the April changes? It’s becoming increasingly infuriating waiting for you to get the DLC/April fix bundle ready. Just roll back while we keep waiting indefinitely.

As a developer I can think of a few reasons why they can’t realistically do that now.

It might have been possible immediately after, but the more people have played and the longer that they have played makes it increasingly difficult with each day that passed since it went live, and I suspect now it would be nigh on impossible to roll it back.

Your save game would be unusable for a start. It would be full of references for stuff that no longer exists, stuff that’s changed, and depending on if they’d changed the “structure” or way they stored said data then it may be in a different format. Meaning that they’d essentially have to cleanse your save file / convert it back in to a pre-April format.

Best case scenario you lose progress. Worst case, you have to start over again.

Personally, I’d have liked it rolled back too. It was a pretty miserable time on Xbox from April to the FNIX Update, but after FNIX Rising on Xbox… I daren’t play it solo for fear of losing my save, and can’t play it multiplayer because it is damn near unusable. It crashes more than ever.

Sure, a roll back now is hard and grows harder with every day. It may even be practically unfeasible. Right now though, I am inclined to believe anything is more likely to happen than the DLC patch dropping on PS4…

Its been more than 5 months now since April, all we need ( ps4 players ) is the AI FIX.

To be fair, us PC people are pretty tired of hearing about those silly platforms hogging all the resources of a rather small team. Besides, Sony/Microsoft bears some responsibility in making their platform a pain for developers to work with.

While i understand the long wait for console players, this topic is not a place where to vent frustration and/or make any kind of demands towards Systemic Reaction.

With that being said, i urge people here to remain polite and respectful.

That type of thinking is not right " us PC people" (i´m PC people and PS4 people btw).
There are other small teams out there and none had such a “big” problem as this, in fact this situation is quite rare, but they made the decision to make the game available to other platforms at the same time, it was expected for them do deliver, something got wrong with the code, and they no longer can guarantee that to other platforms.
It does not speed the progress, but it´s normal for the affected individuals to protest, after all the product they bought no longer works properly.
So you should be happy that your product works properly, let those affected protest with fair words, and for those who do not talk with respect, let them diminish themselves or just get banned.

My post got deleted because apparently nowadays people cant ask devs to fix their broken games
Anyway, bundling the fixes with dlc build is the stupidest thing, most of the new issues are from DLC. We ps4 players just want the AI fix for now. i managed to stop about 30 people from buying this game on ps4 in the last 2 sales and will keep so until its fixed.

The " US PC PLAYERS " is the most saddest argument i have ever heard. Also sony/microsoft have good platrfom to work on, if any problems arise its coz devs in general dont know how to work on it. Many many great games came out on cosloes with little issues from both AAA and small devs.

To be fair, us PC people are pretty tired of hearing about those silly platforms hogging all the resources of a rather small team. Besides, Sony/Microsoft bears some responsibility in making their platform a pain for developers to work with.

The decision to support or not support “those silly platforms” is also on developers. If you don’t have resources to do this - just don’t, focus on a single platform. Blaming Sony/Microsoft for your own decisions and failures is a dead end.

Hey, speak for yourself. I’m on PC and I want nothing more than to see the game on all platforms.
Just because I’m a PC player doesn’t mean I can’t be frustrated about the issues the consoles are facing as well, I hope they get resolved as soon as humanly possible.

Like @Aesyle says, let’s keep this topic free from venting frustration towards the current issues.
I know it’s not ideal for anyone and we’re right to be frustrated when things don’t work but this isn’t the place for it.

Who else is excited to get back to blasting some bots😃I sure am.

Thank you for your hard work, LOVE the game, but it has been almost a month and a half since your last letter. As much as the PS4 community has had to deal with lately with delays, we would all appreciate more frequent status updates. We are feeling forgotten, and weekly news would let us know that you are working on our situation and care about us to some extent. We don’t expect miracles, just news about your progress on the game we paid for. Please spend 10 minutes a week to keep us informed as to the status. Thank you.

We ps4 players just want the AI fix for now.

I play GZ on PS4. I have little issue with AI shooting through objects or that they are sometimes hard to beat, for now at least until the next update arrives. I set the game difficulty to “adventure”, which makes it playable for me.

Only remark I have is that from a development point of view I do not quite understand how the root causes of some of the issues with GZ over time were so hard to find and seem so much unrelated to the targets been set for the updates. I must be ignorant in thinking that a game such as GZ couldn’t be as complex unless the code at some point was not managed properly in some way.

It’s just an impression I have. Don’t take it as real criticism. I just want to point out that I’m hopeful that the way it went will not be the trend, for the devs’ own sake. Don’t mind me personally. I’m just fine with half-broken games, but I’d imagine many other consumers are not.

All the best. Anxious to buy the new expansion for PS4!!!

Ive had the game for a while and it just crashed on me yesterday.

Once again, spending 10 minutes on a weekly update would be nice. It has now been over a week since the last news. Feeling forgotten. Not asking you to rush anything, just please keep us in the loop with a bit of info.

Once again, spending 10 minutes on a weekly update would be nice. It has now been over a week since the last news.

Actually, it has been only 2 days.

Thanks! I was only looking on the Forum and the game site which, to me are the most official. I’m glad they put it somewhere though.