Hi devs and other players,

in the last live stream I asked for this and I thought it would help to get feedback for the devs here.

So I like the game but in terms of a shooter game it does not the bast job in my opinion. What annoyes me the most is the mouse sensivity variation. (If you don’t know what I mean, take the binoculars and move your mouse in the lowest zoom level and compare it to the highest level)

I set my sensivity so that the mouse feels good while not aiming. But when I aim, not many weapons feels good.
I have two suggestions here.
The first is to change the scopes
Currently they are 1-4x , 6-8x 8-12x That means that when you aim and look through the scope you can us the mouse wheel to change the zoom level, for instance the 1-4 scope is able to change from 1 times magnification to 2x, 3x and 4x. In theory this is a realy cool feature. In reality (with my settings) the first zoom level is too slow, the 2x is ok and the 3x and 4x are too fast. This results in a bad aiming feeling in too many weapons/zoom levels.

The second suggestion is an posibility in the options to adjust the sensivity for each zoom level.
This way the players can adjust each scope so that it feels good to aim with it.
This would significantly improve the shooter feeling of the game.
A system like that uses Battlefield 5, which has btw a very good shooter feeling over all zoom levels by default.
Here is a screentshot of the advanced sensivity settings of BF5: 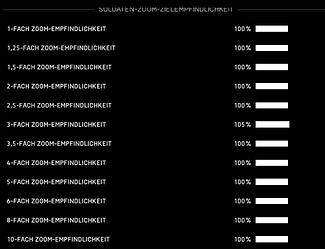 What do you pc players think about that?

I think, as far as look sensitivity goes it’s adjusted to compensate for the amount of zoom you’ve set the scope to. I think there’s an option to change that, but I can’t recall. Someone prove me right?

I wouldn’t mind more alternatives for scopes, and how they work. I can’t remember who said it, but a while ago it was suggested to be able to zero scopes properly to different ranges, I can imagine it’s something like that.