I got an idea for a new variation of tanks, this type would be scary AF imo.

TANKs can run, so why not make a variant without big guns, that ´s main objective is to run you down, and flank you. As we all know TANKs can do that anyway but they stop when they get to close.

But this variant prefers using it´s legs for attacking you. It would move all the time, more like Hunter AI. Make it move when it takes a lot of damage. Have it look for a position where it can attack you. Maybe have it build up speed in a straight line, make it run pst you like a bull, if it runs into someting like a building it cud release a similar shockwave to a stomp.

Versions:
Prototype - No extra weapons, tries to force you to move and not camp in one spot, moves when getting shot at and trying to flank you. Normal/low light vision

Military - Medium armor. Got 1x shotgun on each side of its head (2x total, can use all ammo types) same as above AI (only use shotguns if you are in a small area) Can run and release gas behind it (gas wall) Blocks of areas. Normal/lowlight/Thermal

FNIX - Heavy armor. same as above AI. Gets 2x grenade launchers (explode after 3s) instead of shotguns. Actively tries to flank you and maybe give it the Seker call so it can call for backup. (calls upon nearby support and Sekers) Thermal/Object penetrating

Apocalypse - Extreme armor package, all directions even the back & under it. same as above AI. 2x Flamethrowers (napalm that sticks to surfaces and burn for X time) and a grenade-launcher (shoot small variants of the balls from TANK MIRV attack) on top for when ppl hide in hard to hit places. Enhanced movement speed (runs 5-10% faster) Siren calls hunters with chance to spawn different classes (50% military 35% FINX 15% apocalypse) maybe 5-7 total hunters 30-60s before they arrive. Cooldown 300s for the reinforcement call. All vision module (has a increased chance to drop AVM (5%)

Point of these TANKs/enemies would be to make you fear something again in late-game. Game gets pretty easy later on. Maybe make them spawn after lvl 15-20. Running is a valid strategy

I like to hear what ppl think of this idea

Maybe input your own ideas of ways to make the bigger enemies scarier again? Discuss away

I think these are cool ideas. I’ve always wanted Tanks to be able to carry more weapons, and more variety of them. Introduce one with two machineguns, or two mortars, etc. And that railgun we’ve seen earlier, I’d love to see that put to some better use. I also think it could be interesting if Tanks could lock into different targets with their guns. So if you’re facing two players, it could multitask.

Yea there multitasking ability is horrendus, how did they ever defeat the military? (lore)

They need to fix them or add a massive big threat. that even highteir player fear

Have it look for a position where it can attack you. Maybe have it build up speed in a straight line, make it run pst you like a bull

That is already in the game and as far as i know, all tanks can do that (though, haven’t seen Apo tank doing it yet).

To get the tank charge run at you, where each step is stomp attack, there are some requirements:

Isn’t a Tank a wee too big for this?
Now, how about a Bull machine?
Like a Runner, but bigger, faster, and with horns?
Something like: 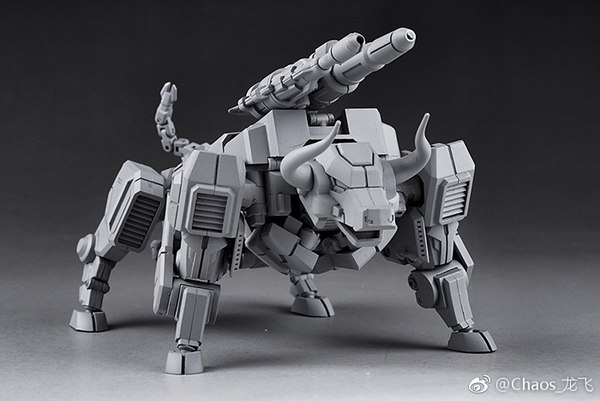 I do LOVE the idea in itself, just NOT with a tank, for somewhat obvious reasons (it’s size hinders chasing you on certain terrain, also, if the military would make a machine for (flanking) melee engagements… would you think they’d use a Tank, or this?

Yes they do run, but most of the time they run up to you so that they can use there guns in close range

And if it happens that they have no weapons, most of the time theya re just standing there doing nothing or they walk away. Imagine one that starts running towars you and activly tries to run you over, maybe make it avoid urban areas and cover big open areas like the NE of the map.

I like to see new variants that are not all the same, this was one of those that comes up when I talked with some buddys on how to make the game scarier as we pretty much just fly through the fights with very little risk. Maybe one of us gets downed for 10s… maybe

I like someting scary that even the best of players fear, maybe make them spawn when host is higer then… say lvl 20.

Xogroroth:
Becuas it would be scary AF to have a huge machin run after you, I saw someone earlier on here/redit that posted a picture of a hugh tick, that could be cool to, it would at least be scary, imagie if it was blind from visual for exampel, that it attacks sounds, then you cud sneak past them and they would only atack your last “know” position, it would give some tacticks to the game.

@KAELES-YT
SIZE is not the only ‘scary’ thing, trust me.
Think warfare, big American soldiers being torn apart by small Japanese soldiers with katanas?
Small things can be a lot ‘scarier’ than big ones!

I like someting scary that even the best of players fear

Different people fear different things. For example, unknown is the thing that scares me most. E.g traveling in the dead of night, in dense forest and without knowing what might jump at you. Eerie music also helps a lot.
I almost met my demise when i met 3x FNIX hunters in the very same setting described above + it was raining with thunderstorm. Following was very chaotic: aimlessly running with no clue where i was, hunters in close proximity shooting at me, me trying to stay alive while randomly shooting back in the general direction where hunters were. It was terrifying. Moreover so, since back then (April of '19), i didn’t have the hunter-killer weapon (.50 cal) and i was alone, having 3* and 4* weapons. I was about lvl16 or so at that time.

But a huge tank that i can see miles in advance coming or hear it well in advance (ground shake + stomp noises) isn’t scary at all. Also, while i’ve engaged tanks in open areas, where it can and has used it’s charge run against me, i usually stick near or in the buildings for cover.

When you started GZ, what was the most scariest for you? Meeting hunter in the middle of night? Ticks in the bunkers? Something else?

Becuas it would be scary AF

If you want scary, 24/7 night-time + triple the ticks amount. E.g you’re walking and suddenly a tick jumps from the nearby bush at you. Isn’t that scary? Or when traveling in forest, you’d hear FNIX/apo hunter sounds but for the love of your mind, you can not make out where it is.

But for the time being, disable the proximity warning icon. Without it, game gets considerably scarier.

@Aesyle
you use a 50 cal to kill hunters? that is imo a very wastful use of that ammo. I like to use a shoutgun or my trusty AG4.

But then the one enemiy type I don´t want to fight in the open is the FNIX class hunters (those darts…)
Apoc hunters are more fun as they are using there flamethrower when you get close to them but they also got long range weapons.

tripple the ticks would not be more then a few jump scares, mostly an annoyes, 24/7 night time… not needed, you cud add heavy fog for exampel more weathers are welcome imo.

We all want diffrent things about were we want the game to go, some of us clearly wants a casual experience while others wants more of a challenge.

One of my fav games is Subnutica becuase it keeps you on your toes at all times, in generl its not that hard of a game but it is more of a terror game, the sounds, the visuals are on point. 10/10

@Xogroroth
I would love to have a smaller assassin type machine as well, but that is not why I brought up this specifec idea. I feel it is very unsetelling hearing the stomps getting closer so fast, but then they become snails when they get to you, makes no sense.

@KAELES-YT
While a big one can be impressive (I think that is the word you wanted), it’s therefore not scary.
I prefer to walk into a FNIX tank, than into a Military missile Runner…
Tanks are suck cumbersome beasts, it’s just too easy to dodge them, them missile runners then… can be a darn thorn in the eye.
No?

missile dogs usually only hits when they get a drop on me. Most of the time I “take them as allies” so I actully prefer facing them (hacking)

But that works for most enemies apart from tanks/harvesters as they are generally to dumb, you have to literlly stand in the open in front of them for them to react most of the time and even then you got like 10-30s to react that a building prepares to attack you…

But that works for most enemies apart from tanks/harvesters as they are generally to dumb, you have to literlly stand in the open in front of them for them to react most of the time and even then you got like 10-30s to react that a building prepares to attack you…

This issue I addressed in several posts.
It’s brutally maddening to me, how machines so often are mere cannonfodder!
So saddening…

Thank you for stating this!