Since the introduction of the Plundra I am always wondering if I need to pick up certain items to stash them in the Plundra or if I already have enough of it in there. 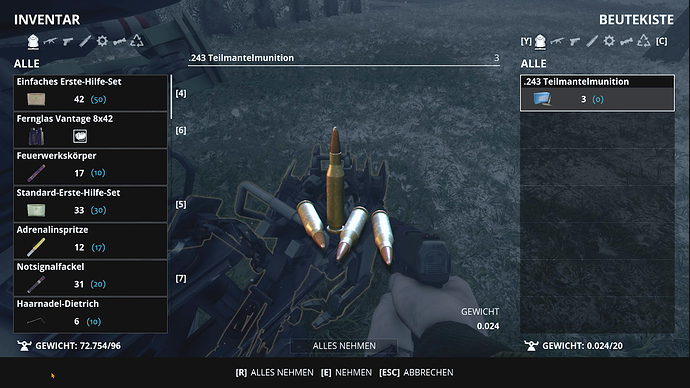 I made the colour different to recognize it on first glance. In this case I could see I have no SP ammo for the Meusser and know that I would only collect FMJ ammo of it’s type.

I have a “modification” for it, that i think will create a “better” result for the end-user.

The loot-menu lists “ItemName 1 (2) {3}”, where ( ) = local inventory count and { } = plundra count.
That way you wont have to scroll thru local inventory to try to find “all the items” in the loot to see if you have enough of the ammo type or whatever.
I would love to see this implemented for all items, even weapons and attachments and perhaps even with different counters for “attached” and “free” mods.

That would instantly show us that we already have 4 shotgun scopes in plundra and one is not attached to anything when we come across a shottie scope in a lootable container.

And regarding the differentiation between different storages, a specific colour for each storage is actually a great idea.

So should this idea be implemented, i sincerely hope they will implement “color-coding” information.

A bunch of numbers in a row isnt very user-friendly, but teaching the user that blue means backpack and pink means plundra shouldnt be too hard.

Remember the old inventory system, sir?
With the boxes?
That was ideal, if you want a clean, sorted out inventory/plundra.
Think about it: in the rifle tab (pure example) you get say 100 boxes.
Each weapon, no matter what, has 1 box, but the limit is still based on weight.
Now, you can place any weapon anywhere on these 100 boxes, and it will not move, unless YOU move it.
Perfect (at least, this would be for me).
Now, think of ALL tabs with said system…
Best of both worlds.

But we still run an issue: what with weapons that have an attachment…
For this, I suggested a separate “personal” weapon closet (as seen in some old westerns and some police movies), where your own, personal weapons with attachments are stored.
These would have the old system, box wise: three boxes per row, and let’s say… 20 rows? where you can store your personal goodies.
We could even turn it into a semi-ammo case, so we do not just have a pistol and rifle tab, but additionally an ammo tab.

EDIT:
Let me try and explain something, sir.
I’m autistic, and I’m, according to the people I know, too logical and too pragmatical.
And I do not think from ‘emotion out’, according to them.

As example I can tell this one:
I’ve always was against plundra, why?
It would upset balance a lot, as people could now start to hoard ammo and whatnot.
It was proven to be correct…
Yet… I use Plundra to store gear to give away to those that want it (Discord Trading Center).
I mean, it’s there, right?

I was against Exp Weapons, unless balanced out, as these, when OP, would imbalance the game further.
I was proven to be correct.
Now… I do not use these, because they are too OP.
But DANG… do they look nice.

I was severely against transport of any type, as this would undo a part of the game: exploring.
I did say, I would accept it, if the dangers that come along with it were correctly implemented: you would be a sweet li’ll target.
Then, FR came with… a TRUCK…
THE HORROR!!!
However…
I was the one, the only one, to think: well, if we have this… and seeing that safehouses (with a plundra that stalks us) is somewhat a strange thing, seeing we can teleport (WHA??? WITCHCRAFT, BURN DA WITCH!!!) which makes absolutely no sense…we COULD have a MOBILE BASE!!!
Yes… me… the one that is SO against transport… advising for a TRUCK as base.
BUT: That would undo this “witchcraft”, the “stalking plundra”, and best of all?
This base could be a new crafting thing, so you can make the truck “as you want it” (within limits, obviously).
Simple logic and pragmaticallity.

What I’m trying to say is: Though I do not always agree with implemented things, if I think, it might help the game, the story, I will turn to it for idea.

What I wonder is: you played the main story line, correct, sir?
Have you missed “Human NPC interactivity” (not speaking of spoken messages on recorders and the incoming radio calls)?
Or was that part good as is: where "machines (recorders, radios, …) told you where to go next, what to do next?

The suggested idea is only helpful to those who have trouble remembering what they have in their Plundra.

Moreover, Plundra isn’t a thing where you need to collect X amount of Z ammo to gain Y. And the current reason for it (which i can see) is: “if i have enough”.
Enough for what? Since depending on a person, for one 100x rounds of Z ammo is more than enough while for another, 1000x rounds of same ammo is not enough. Also, if you are unsure, pick it up and sort it out later, when you are at Plundra (that’s what i do).

I’d see more use of Recycling Station inventory indicator since those are far and few between, resources themselves weigh quite a bit and with resources, you do need X amount of Z resource to craft Y.

The suggested idea is only helpful to those who have trouble remembering what they have in their Plundra.

Me, for example. I’m rarely at a Plundra to memorize everything including the amounts.

You can Fast Travel to any safehouse

Yes, but then I’d need a field radio every time and those are not that abundant.

Moreover, Plundra isn’t a thing where you need to collect X amount of Z ammo to gain Y.

It’s not about math. It’s about seeing at a glance if I need to pick an item up or not. When I say to myself: “I need to have at least 100 rounds of ammo type XYZ before I can pick up the gun from the Plundra” I can estimate how far that goal is. But it’s not only about ammo. It’s about grenades, gas canister etc. I’m used to lure rivals to safehouses to do some old fashioned kamikaze attacks with lots of gas canister or landmines to ring them down.

Thanks for using my proposal for your gain. I’d have the indicators for everything not only the crafting materials. Why limit it to crafting materials only? This would basically set some artifical limits what’s shown and what’s not.

I could do with another implementation if the indicators are too provoking. What about a good old journal. And I mean an ingame journal where I can erase stuff, type my own thoughts or whatever I want. So I could keep my own inventory in the journal at which I can look at every time I want. This would be applicable to crafting materials to.

It’s about seeing at a glance if I need to pick an item up or not.