Problem in the game

I play with a friend in a cooperative, but I run 2 times slower than he, in a single game the speed is exactly the same, I reloaded the game, recreated the character nothing helps.
who knows the solution to this problem, help me please.

There are some in-game and deliberate reasons you may be running slower than your friend.

If neither of those are the case, then this may be a bug.

To correct you on it;

The skill is named “Running Speed”. Also “Stamina Amount” skill defines how long one can sprint, before out of stamina.

my friend and I have the first level, we have just started

What is your in game weight?

Does it say “Sprinting disabled” in the bottom left corner of your screen with a “scales” icon?

Odd.
Is it possible you can upload a video of you both running and you running in a single player game to showcase the bug (if it is one)?

As said above me, make sure your character is not carrying too much stuff as well.

the weight is not big, the speed from the very beginning of the game is slow

the speed from the very beginning of the game is slow

Do you use any 3rd party mods?

for shooting video on my computer

There are several. I, personally, am using OBS Studio. And afterwards, uploading the video to Youtube and then sharing the link here.

System specifications are full.
I do not use third-party mods.
Can I somehow upload a video from my phone here to the forum?

“Full”? What that does mean.
Btw, system specs are hardware in your PC.

So, what are yours?

Can I somehow upload a video from my phone here to the forum?

Sorry man, but today we call this kind of setup a “potato”. It’s way lower that minimum recommended specs for GZ.

With these specs, i agree with @0L0. Your PC is old and that’s why GZ is running slow on your PC.

FX-6100, despite being 6/6 c/t CPU, was medium-end CPU when it was launched, way back in 2011. Now, 10 years later, it’s nowhere near powerful enough to run current day 3D games smoothly. But it’s a decent CPU for web browsing and small, casual gaming (e.g Minecraft).

And while your dedicated GPU (GT 730) is newer than your CPU, released in Q3 2014, it wasn’t especially good back then either. And for today’s standards, well, what can i say… It’s decent for light gaming.

Here, the best and only fix is going with whole modern PC.
While you could buy a better GPU, your old CPU will still be a bottleneck and there is no cost-effective upgrade for your CPU. Only upgrade would be FX-8350 but that doesn’t give much performance boost and it isn’t worth the money it costs. In a nutshell, AM3+ platform is a dead platform.
So, you’d need new GPU and new CPU. But when you’re going with new CPU, you’ll also need a MoBo to match the CPU and new DDR4 RAM as well. That’s essentially a new PC. Oh, your Thermaltake Litepower PSU isn’t best of quality either.

I’ve seen few other folks uploading their videos some other sites than Youtube. E.g Google Drive. But since you already listed your full system specs, it’s clear where the issue lies and there’s no need for you to upload the gameplay vid.

(Where are you from?

As for me it’s stupid. The game runs smoothly and does not freeze. Slow only my character. my friend and enemies move normally and without freezing. Also, I have games like ark survival Evolved and mid-earth shadow of war. And they have very similar requirements. And they play very well, there are no lags.

Slow only my character.

Do you have “Running Speed” skill unlocked?

Also, try disabling Dynamic Resolution since that has issues with low-end hardware.

Also, I have games like ark survival Evolved and mid-earth shadow of war. And they have very similar requirements. And they play very well, there are no lags.

You can’t compare two games, where both was released in 2017, to Generation Zero, which was released in 2019 and uses completely different engine. For comparable game, you should look towards Mad Max. While released back in 2015, it uses the same Apex Engine as Generation Zero does. Other comparable games include theHunter: Call of the Wild (2017) and Second Extinction (2020) ← all are using Apex Engine.

Do you know Russian?

No. Also, English is the only allowed language here, in the forums.

Btw, other things that can slow the game down on you, are malware and/or bloatware in your PC.

Well thank you. but I only have a slow running speed and not a game.

but I only have a slow running speed

In that case, put more skill points to “Running Speed” skill. It should be “Скорость бега” in Russian.

It is located here, in red circle: 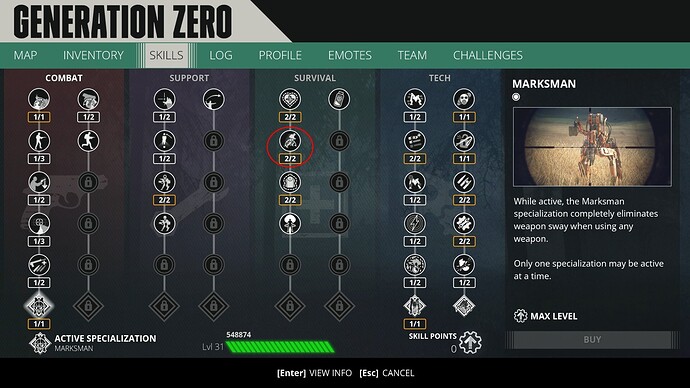