Hello,
having destroyed 3 reapers, I noticed something may be abnormal the more the region leveled up the less machines I encountered in the region concerned. except it seems to me that it should be the opposite, currently I travel the region in the hope of finding machines but difficult …

I strongly agree!
As region level goes up, so should the number of enemies!
Also, as the region level increases, the bigger and badder enemies should be more frequent.

The archipelago region is practically impossible to level up since its just scouts and runners there, with the occasional hunter as a rare treat…

I noticed a similar issue I was on level 20, hoping to get the reaper to soon appear???
Destroyed 3 tanks, multiple runners and hunters and then the map level was on 16??
Does it drop depending on how successful your kill rate is (I did get obliterated 3 times haha)
Only had 1 crash so far (Xbox one 3 hour play time) compared to the previous 1-15mins in

Mate, similar issue on Xbox my end. If I may enquire, what’s the max region level XP and Level now?

It drops after destroying a Rival, so considering that after Nov. patch rivals got mixed up a little bit and one can kill a rival in South Coast and in result decrease North Coast level

I am either very unlucky or bugged, cause I dont get any reaper to spawn. Do I have to kill a rival to spawn a reaper?

not so sure you need to kill a rival. I was yesterday in this situation, killing some dogs and I got the reaper ! (see picture about rivals amount and lvl)

In a nutshell: if you want Reaper to spawn, stop killing Rivals.

Ok but I see you only have 4 rivals, maybe if a zone is already full then there is no room for the reaper to spawn? 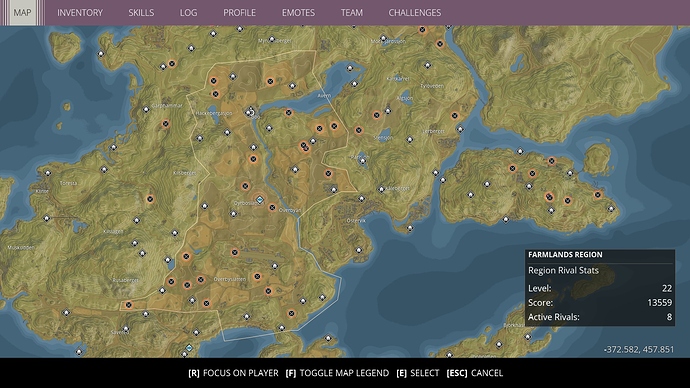 yes your counting right. There are 22 rivals in the farmlands. (cause the rivals from the other zones came looking ;))

and yes I keep my rivals alive and feed them sometimes. If you give them cookies then they dont bite trust me

totally agree, except that there is a problem the more we go up the region and the less machines there are in the region, I have to attract machines from another region to the region concerned to do climb the points of the region, the robots are becoming too rare for skirmish mode. Normally the process should be the reverse, Fnix being alert on the region (s) it should send more machines.
I often spend 30 to 45 minutes to find small troop of hunter or runner (from level 20, tanks and harvesters are very rare (except rivals but the goal is not to destroy them)), and it quickly gets boring :se lasser::persévérer:

Normally the process should be the reverse, Fnix being alert on the region (s) it should send more machines.

I look the absence of machines as “calm before storm” since once Reaper does spawn, you’ll have the hardest fight on your hands.

Ok got the reaper spawned. He counts as a rival too, so it seems that he cannot spawn as long as your “full” on rivals, meaning make sure that you only have 7 active rivals in a zone.

I’m just gonna chip in on this as following the live stream, it wasn’t well explained - as well as some consistency issues BUT - in light of recent spawn I can offer this }

Despite Pontus’ and Reece’s ( WIRED GAMING ) regions both being below minimum requirements for it to spawn, it must be at level 21 for all us simple folks.

Also worth clarifying for 100% clarity - IF you have 8 rivals setup in a region IT WILL NOT SPAWN A REAPER. You need an available slot for it to generate, which will either be from the next level cap of the region, OR 2500XP ( still to be confirmed ) whatever comes first.

Respawning the Reaper for subsequent farming is pretty annoying so far. It feels like this update changed something with region spawns; I remember always running into a harvester (and company) on the road right outside of Anl 118 Farela but have not found it since this update. In the Marshlands at least, I’ve kind of resorted to wandering around randomly or killing Harvester Rival Hunter summons to increase my region score. It’s pretty tedious and doesn’t feel like targeted farming; there’s a lot of just wandering around the map looking for anything to kill.

The other issue that I’m running into is that after two Reaper kills, my Marshlands has accumulated 8 Rivals. Killing a level 4 FNIX Tank Rival seems to drop my region score around 4k points. I’m worried that in grinding the Region Level back up to 21 (for me at Skirmish difficulty this seems be about 11300 region score) I’ll just end up spawning another 8th rival instead. It would be nice if the Reaper did not count as part of the 8 Rivals and could spawn if 8 Rivals were already in a region.

I’m a little afraid to experiment, but does anyone know if the score decrease on killing a Rival changes based on machine type, Rival level, game difficulty (currently playing on Skirmish), or even current Region score/level? Is there a cap to the Region score?

AfaIk the region cap is 25 and yes, the decrease of region points depends at least on machine type and Rival level and from my experience I’d say also on the class of the rival. So killing a level 4 APO tank Rival nearly ruins your region score… ;-/ at least in the lower sections up to 10-12

Thanks, I guess I’m clearing out my Hunter rivals as soon as they spawn then

Tip: keep at least 1 hunter rival alive. Since when you get your region level to 22 or so, ice the hunter and you have good chances of spawning Reaper, without the hunter kill lowering the region level outside the Reaper spawn criteria (lvl21 and above).

Hmm… to purely level up a region that might not be the best idea, imho.

Even though Hunter rivals give nearly no rival-loot (at least in my gameworld), they’re useful to have at the end when the regoin points cross the 21 border and you have 8 rivals in it. And if you kill it early, a Harvester or Tank rival might spawn instead…

Sad fact about that, I had already all my regions levelled up to have 8 high type & class rivals and killed nearly all hunters during that process, to get the best chances on higher rival-loot…