In 1989 mountain bikes was the New and Hot. I got my first one in 1989. A purple CyclePro. Although that is of course personal to me, it is a very typical bike, and they came along the same insane colour schemes as skis, and skiing clothes so well presented in GZ.

Road bikes with thin wheels was also a Thing. (I traded my really crappy MTB for Crescent road bike after a year!!!)

Those who were too lazy to ride bikes, got a moped (“moppe”), in Sweden more specifically a Yamaha DT, 50ccm. They were limited to 30km/h, but by removing all the innards of the muffler, you could get a few km/h more, and by tweaking even more, you could make it go 50-60km/h. However, they were noise as hell! 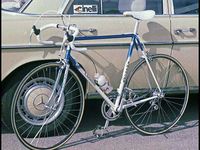 I’d second that. Bikes are enough IMO, I’m not in the car/truck/tank faction, but slightly improved driving physics, a few different models, and maybe some panniers for additional ammo storage would be nice.