The Enemy of my Enemy not unlocking

I have completed all missions to start enemy of my enemy main mission( although I did them out of order), but the mission will not start. What am I supposed to do to fix it other than starting all over? Ps. I’m on ps4.

Players in your game:
just me, 1

It’s being looked into, guys

Sorry to hear that you are having this issue. We are investigating this and wanted to double-check with you that you have the following missions completed in your log:

All of the missions above must be completed to unlock “The Enemy Of My Enemy”. IF one of the 5 missions is missing from your log that would give us an idea of where it could be broken.

If you could take the time to answer the following questions that would help a lot in narrowing down where to look:

Thank you for your time and sorry for the inconvenience!

Hi, thanks for looking in to it!

As a PS4 player I just checked out my log.
It confirms all above mentioned missions as completed.

Played through the game solo.

Hi. On xbox1 have completed all of these missions. Played solo whole game.

Thanks for the information guys, It’s been helpful!

The issue has now been reproduced in-house, meaning we now know more than we did before!

If anyone else has information on this issue and have time to answer the questions in my earlier post, please go ahead as it could still be useful for us in order to identify the issue and prevent this from happening. Thanks again!

All previous missions are finished for me as well. It’s worth pointing out that at the beginning of the August update I did a new save and played co-op with a friend for a while, with me as the host. I know that he had just reached The Enemy of my Enemy mission, and hadn’t done it yet when we started playing from the beginning in my session.

I don’t know if this is connected to multiplayer, but it’s worth mentioning.

I have completed all five missions. I have played solo only. And the same character.

I’m on Xbox One. Is it possible when we boot the game, check if 5 prerequisite missions completed and The enemy of my Enemy mission is missing then trigger the mission available? I can’t explain but I felt Loud and Clear mission was glitched.

Since this is my first playthrough I have been very careful reading the forums in order not to see too many spoilers. So just to be sure: Does “The Enemy Of My Enemy” automatically start after completing the aforementioned missions or does that only unlock it and do you have to pick it up somewhere else? And if the latter is the case: where do you pick it up?

Answers to the questions:

Also, according to the log for “Loud and clear” I have the storage key for the “North Coast relay storage”. I can’t remember actually picking it up, however, the white container remains locked.
Edit: Never mind this remark. Mixed it up with the mission “Heavy Loadout” (radio mast near the bridge on the northern coast) which does not have a key as mission item. (But does have the locked white container).

In addition, maybe this is somewhat useful: I made a backup of my save file before applying the august update and I just checked that one out. In that save I had the following missions completed: “Calling for help”, “Over and out” and “Radio Silence”. The missions “Line of fire” and “Loud and clear” were not activated yet (and were therefore also not listed in the mission list).

Could this bug have a connection with the “A wrench in the works” mission not kicking off? I have not been able to get that mission to start either. As I understand from some other posts on the forum that one is supposedly unlocked by completing “The Old Guard” mission (which I have completed) and is also obtained from “Skvadern Warboard” just like “Line Of Fire”.
If I remember correctly, the only other mission I could obtain from “Skvadern Warboard” was “The Bridge”.

In addition: I also noticed something else in the save from right before the august update which might be interesting (or not of course). It’s probably not related but since “Skvadern Warboard” is involved, who knows:

According to several saves later the next Warboard mission I completed was “Warboard - Skvadern Bunker” after which the “The Command Bunker Network” main mission had apparently updated to show “Warboard - Minken Bunker” and the “Warboard - Uttern Bunker” as beeing also completed.

I hope this useful and I hope you find the problem. Good luck!

Have completed every other missions (82 of 84 in total) except Enemy of my enemy and Behind the curtain. I’m on PS4 and started this new save just before august update. Played a mp session with my son before update, after update only solo.

Thanks for the info, much appreciated!

To answer your question, “Enemy Of My Enemy” should automatically appear in your log as soon as you have completed the 5 required missions (When it is working correctly).

So if you complete Loud and Clear mission earlier than other four missions maybe you can avoid this glitch.

Sorry for the confusion and thanks to @rad1ka1 for reminding me.

That being said. I did 3 tests with 2 earlier saves (from after the patch) to see if the order in which “Line of fire” and “Loud and clear” are completed made any difference.

The short answer (for what I tested): It did not.

The long answer (but also see “3. Extra” below for some other interesting things) :

In this save I had already found “Skvadern Warboard” and had already taken on the missions “Line of Fire”, “The Bridge” and “The Old Guard”.

This was an even earlier save in which I had not completed “Skvadern Warboard” yet (and obviously “Hermelinnen Warboard” neither). Just to see if the order in which the missions are picked up (in stead of just completed) made any difference.

Planned to do the reverse order with “Hermelinnen Warboard” as base but didn’t bother.

I also checked @rad1ka1’s remark about the radio being available before destroying the Tick. In my case it was not.

The first time I tried, I actually thought the radio was indeed available before destroying the Tick. But that turned out to be a perfect demonstration of how the unpredictable nature of the game (which I absolutely love), an unfortunate combination of events, and tiredness can turn a test into a massive royal mess.

Not only is it somewhat funny but I discovered some interesting and probably buggy things as well. If nobody else beat me to it, that is.
And the video might even give you a clue about another well known bug.

Here is what happened:

After Test 3 above, I remembered that radio story and decided to check that out. So I reloaded a save and had to do “Hermelinnen Warboard” again to pick up “Loud and clear” (I didn’t bother making a backup after picking it up before). After that I unlocked Safehouse - Alby Church on the way and went on to the location.

There I was not only greeted by the usual 2 Runners and Hunter but also by (how else can it be) a FNIX Tank. I screwed around a little before I decided that it was probably a better idea to go back to the Church, save the game (and finally make a backup) and restart from there with the Tank probably gone.

So I did, and indeed the Tank was gone. I killed the Runners and Hunter and went directly to the police radio. And indeed I could interact with the radio. After that I returned to the locked door to see what had happened there. The “locked” door now said “Hold ‘E’ to unlock”. So I opened the door and the Tick was already destroyed.

That got me thinking and I decided to watch the recording I made.

Here is the fragment when I had just arrived and before I decided to fast travel back to the church to make a backup and proceed from there:

First of all, I got a huge frame rate drop starting right between the sticky flare hitting the Tank (or mast?) and that Tank starting to shoot. Maybe because of the known frame rate drop bug but possibly triggered by MSI Afterburner recording on my relatively full hdd. I noticed that when I’m not recording the frame rate drop rarely happens. (Strangely enough though, it also did not happen during the many hours of recording the previous tests.)

At that moment, whilst playing, I was … well … slightly disorientated and somewhat blinded by that huge blast so I didn’t notice the mission updating or the Tick exploding.

But from the video it is pretty obvious that the Tick was destroyed from the outside by the rocket blast from that Runner (and actually from a pretty large distance).

So I reloaded the earlier save again to test it the right way and (after “Hermelinnen” a-gain and first making a backup in the church, this time) I could not interact with the radio without destroying the Tick first.

Interesting is that you can destroy the tick yourself with a rocket too without unlocking the door first. I guess that should not be possible.

Also, when you destroyed the tick this way, the key is still in the trunk of the car and can be picked up.

And not only that. If you stand on the right side of the car you can actually pick up the key through the plate work without opening the trunk of the car: 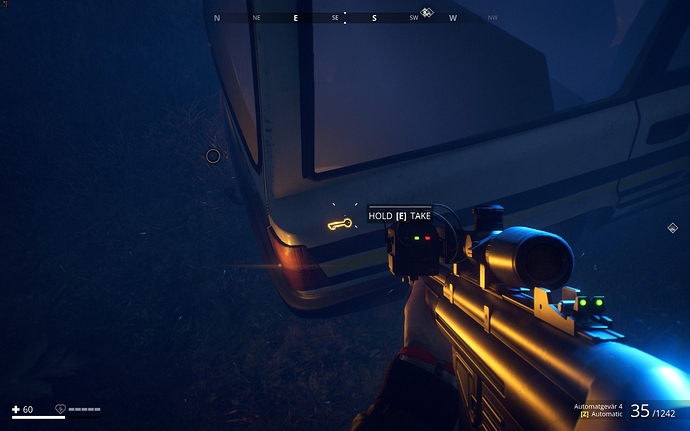 Now that i think of it. I forgot to test if you can pick up the key after you interacted with the radio. Probably not but will test that tonight and update this post with the result.

Long story but I hope it helps.

Update Edit: The key disappears when you interact with the radio. And it does not appear in the mission log.

Hello all who like me are having a problem with this mission starting. I just asked in the Dev stream on mixer if there was any word on where they were at on a fix and the reply was that they were working on the patch notes & that yes this fix is in it for next week!!!
I am so excited about this & this is why I so love this Dev team they care about their game & try to fix stuff as fast as they can…I so have hope for the future of this ever expanding game…
SPP

I also encountered FNIX Harvester at the site when I was doing this mission. I believe I died once then got back to the site via Field Radio I put. At the time, the Harvester walked away off the site so I sneaked to the patrol car then the glitch happened.

There also is (or spawns) a regular Tick inside that is not clamped to the fusion box. Maybe that’s what you remember?