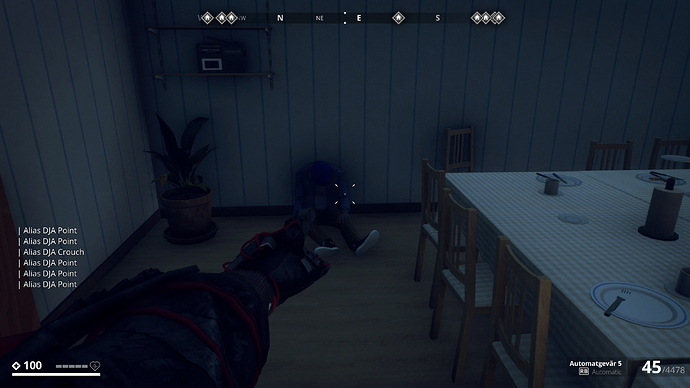 What am I missing here? I checked the restaurant next door; no weapon there. I’m not sure what’s meant by ‘rilfe on the wall’; I checked inside and outside of the house and the low stone wall nearby but couldn’t find anything.

Hunting Rifle on the wall. Head East out of Church - look for the houses ( blue police lights outside )

I’d do a video, but the trolls seem to be out in full force here

I’m not sure what’s meant by ‘rilfe on the wall’; 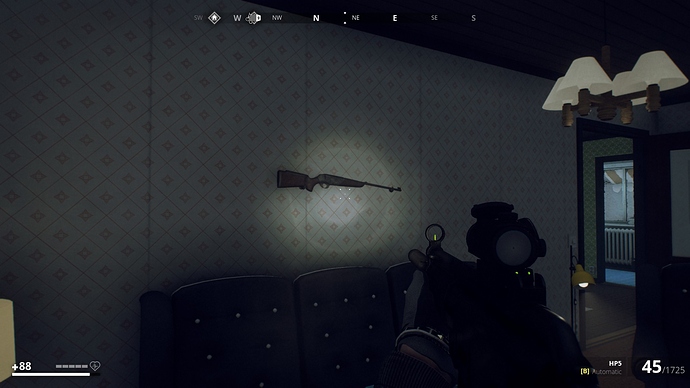 Thanks! I found it.

Didn’t realize it would be in a completely different house.

Anyone got confirmed locations for tyre repair shop - I’m slightly going out of my mind in the dark looking for the missing one. ( ive got the 12G )

Can’t help you, I never logged weapons locations. Best bet Aesyle. I found the weapons when I was looking for them but can’t remember where they were. Wasn’t there containers in the back. And where did you find the 12G? If other people search the forum they might find it helpful.

12G is in the yellow petrol station, next to the cashiers register.

12G is in the yellow petrol station, next to the cashiers register

I am now checking all locations again. I am now in Yttervik. I believe there was a weapon to be found on Yttervik Ferry Pier. Can anybody confirm that it was there?

According to fan wiki there once was a farm called Rodgård Farm, I can’t confirm that with coords, could it be that is has gotten another name. If anybody knows the coords… do tell.

With FNIX Rising DLC/update, additional weapon is added to there, making total of 3 weapons;
1* Möller - next to a dead runner
1* Basball bat - next to a dead person
1* Klaucke - on top of the kiosk

The darkness in this game is very consistent

Thanks Aesyle. There are indeed three weapons but when I travel to Yttervik it says 100% completed weapons 1/1, Collectables 3/3. So are two of these weapons not counted for the 100% location completion?

I have 291 locations found and 290 completed. I have been trying to find that one location which i did not complete. I am starting to think I it might be any of the locations we can’t access no more like Rö or FOA 53.

So are two of these weapons not counted for the 100% location completion?

There are many places on the map which has more weapons laying around than shown on the weapon loot counter. In one way, it makes the loc completion easier since you don’t have to find all of them. But in other hand, it makes it difficult since it’s unknown which weapons do count towards 100% completion and which ones don’t.

Back in the day, when you wanted to get 100% loc completion, besides finding all collectables and weapons, you had to find all loot bags/boxes as well since latter did had it’s own loot counter. (More info about it here.) Devs have since then removed the loot bags/boxes counter because it was out of whack and it was easier to remove the counter than go over each and every location to fix it.

That being said, i don’t know if devs have also updated the weapon counter. But my best guess is that they haven’t. This is evident above, where on one loc, there are 3x weapons while counter shows 2x and in another loc, again, 3x weapons but counter shows only 1x weapon.

Safest bet is to pick up every single weapon you come across. Though, many weapons are cleverly hidden and it’s easy to miss them.

There are no weapons to be picked up inside the RÖ and FOA 5. So, no need to worry about those locs.

Yes true, I have been picking up every weapon lately, but in the beginning I didn’t. I’m busy to visit every location that is known to me again to see if any of them is the one I need to complete. In between trying to get more rivals to spawn and find schematics, but it a slow process.

Is it really important to collect all weapons? Is this important for to finish a mission? Or missed i something when i didn’t collect all ? Or is it only “nice to have” that the counter shows 100%.

In the first time i collected all what i have found but since it turned out for me that i use only four weapons i throw the collected weapons what had one or two stars, away or i got them to the recycling station and recycled them, because i saw it useless in carrying

a bunch of similar weapons with me

I don’t have many locations finished and it doesn’t hinder the game completion.