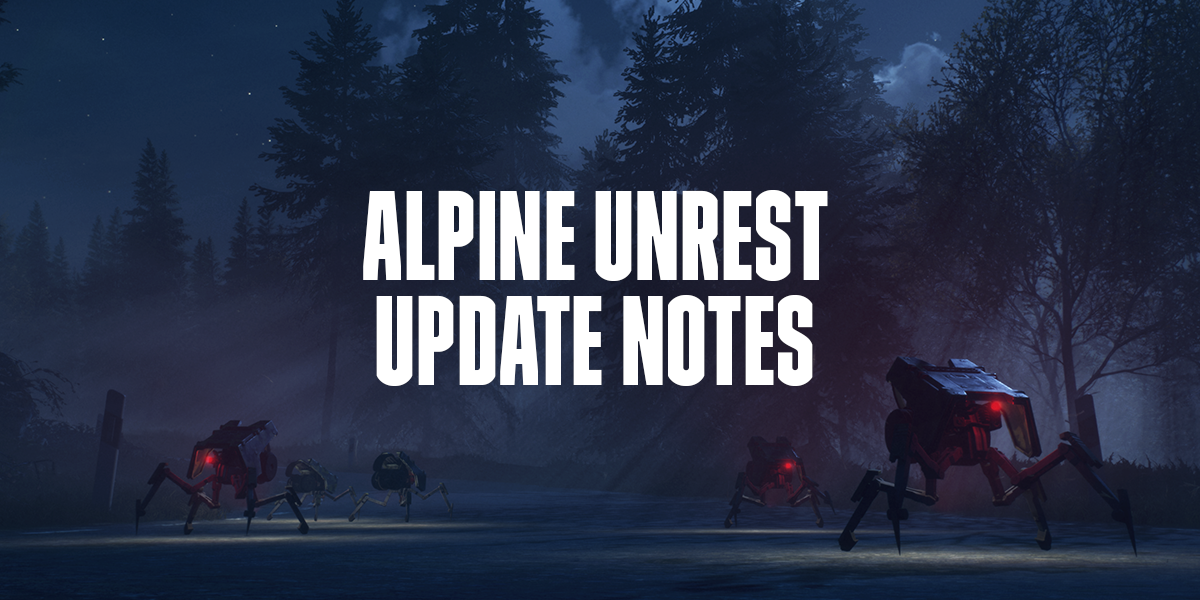 This month we’re proud to put into your hands our first expansion, Alpine Unrest! In order to bring you this substantial update to the game, we needed to give it the appropriate amount of time. Work started a few months ago and was done in parallel with the other updates we brought your way - with the aim to help set the stage for this release.

There’s a lot to go over this month, and not all of it is limited to the paid expansion. We have bug fixes as usual, but on top of that we also have some goodies that are readily found in Alpine Unrest making their way to Östertörn in a limited fashion. All-in-all this is a major achievement for the team and we hope you enjoy playing it as much as we did making it.

Now… the island of Himfjäll awaits.

Alpine Unrest takes place on the island of Himfjäll, off the east coast of Östertörn. This former popular ski destination is now abandoned, waiting for you to explore it for equipment, weapons, answers to new questions, and more. The town consists of several key locations, including towns with cafés and shops, caravan parking lots, military bases, ski slopes, a burning church, and the massive ski hotel Björntunet.

On top of that, the new island also continues the story of Generation Zero, providing new missions and introducing you to new allies - a group of survivors who have managed to survive the machine invasion against all odds. But we can’t introduce new friends without also giving you new enemies, and that is where the Apocalypse Class comes in. This new tier of machine are the deadliest to date, utilizing horrible weapons like flamethrowers and biochemical guns to try and take you down. So make sure to be extra careful when moving around the island.

Lastly a new expansion would be nothing without new weapons, clothes, collectibles, and achievements. Alpine Unrest introduces Machine Guns to the game: the KVM 59 Machine Gun and KVM 89 Squad Automatic Weapon. Both of these will be excellent tools for fighting back. Additionally we have new outfits, new things to collect and of course, new achievements to unlock. So keep an eye out, you never know where they might be found.

But that doesn’t mean you’re safe on the mainland. While the Apocalypse Class machines cover Himfjäll, some have made their way over to Östertörn and may appear in select areas of the mainland, should you be unlucky enough to run into them. Thankfully, the new Machine Gun class of weapons we’ve introduced can also be found by all players. There is a twist though, you’ll have to defeat some of the new machines to have a chance to get them. But, new challenges bring new rewards - good luck!

General bug fixes that will come as a standard “free” update alongside the launch of Alpine Unrest follow below:

Players will now take gas damage properly, and can die from it, instead of stopping at 25 health

Does this mean the gas mask has been fixed?
I didn’t see that in the notes, I may of missed it.

But a pretty impressive list of fixes none the less.

Aaaagh! No disappearing mines, tanks and gas bottles fixed, then…? Bleat. How are we to destroy Apocalypse machines without being able to draw them into ambushes, from further away than twenty or thirty metres? I was soooo hoping. Pleeeasse for the next one. I am willing to beg, and others are too. In fact I am willing to pay for the upgrade as DLC!

Players will now take gas damage properly, and can die from it, instead of stopping at 25 health

Hello,
We have been told by @Zesiir that the gas mask no longer works with that in mind & with the current “fix” are there plans to turn the gas mask function back on? Thanks for your time.
SPP

EDIT:
@LadyNibiru I see you beat me to it…lol
SPP

i thought that was a feature and was rather cool

I did as well…lol. It looked great watching it in a fight!
SPP

@SteampunkPagan unless there is a fix for the gas mask, I don’t see how anyone can get into a gas filled bunker to turn on the power, unless you chow down on those medpacks like the cookie monster with the munchies, would of also liked to of seen a fix for the random blackouts, didn’t see that either, can’t have everything I guess!

Nice the Phantom weapons will be fixed

Sadly no quality of life, inventary or shooter improvements

Yea even with the skill trained I would have to agree with you here.
SPP

Good to see a lot of improvements being made. Really hoping you guys worked out the worst of the crashing issues. Any ETA for the Update and release of the DLC?

Edit: @Bootie Looks like I was right, Norrmyra is getting populated again

There are so many things in here that will have MAJOR implications for the game, sheds will now be a tactile position to shot from, ticks and hunters will be less annoying to deal with, reload times will likely see a minor change and then on top of all that alpine looks like an amazing experience for us as the players. and so many props are due for you dudes working on this all while bringing us major updates along the way, the development of this game has been so interesting to watch along the way and this explains a ton for us as to why the updates have happened as they have, it all makes sense now

Updated: The official Generation Zero Twitter confirms it; The DLC and Update both release tomorrow!

So is the multiplayer crash fixed or not? Only one item under crashed, and not much explanation what where fixed.

Why just a burning church?

boat up a slope any one ?

I know i expected it on Thursday after we’d get a new sneak peek but honestly tomorrow makes this so much more exciting, what company is like "here’s our biggest DLC/update yet, and for the cherry on top it drops tomorrow

" these guys are madlads and are treating us so well with alpine.
I actually did too after the stream last week, had a crazy dream of fighting on the ski slope, though i was killing all the machines far too easily in comparison to how difficult it will be in reality :'D
Man i can’t wait, i wish we could just buy the DLC now so it’s fresh and ready for the update tomorrow!

Because death metal that’s why my friend

You’ll have your hands full I suspect, making video’s about this. It’s pretty big news

Sooo many videos my dude

I can’t wait to explore all these new apocalypse machines in and out to find the ways we can defeat them! Haha just coming off a bender of coming up with 30 traps in like two weeks, gz keeps me busy a plenty

I can’t wait to see the communities reaction to these new machines as well, i expect lots of screaming and running in terror