I love your attention to detail

There’s not much to go on for now, maybe if we find more lore. Only thing I can think of is that they might be other planned (or discarded) Soviet Landing-zones.

The Mountain Eye, and the Dig Hole are no longer places you can find in the game.

Teleport me to the top

Experience the warm temperatures and cool breezes rustling the multi coloured leaves of tall trees on either side of the bicycle track. See the blue sky and dappled sunlight and red optics of a military grade hunter as you ride by…

@Gysbert could you do a root of all of the Soviet camps?

Sure, I will see what I can do. Do you mean all places with soviet presence or only these camps

Either is fine. It would just be nice to see all the Soviet installations.

Dear lord @Gysbert how did you do this so fast? I asked you yesterday if you could make a route. Good job man. Im going to go find all of these tonight.

It’s not ready yet, need more pictures and gather some info.

I almost would have said that you already have screenshots of everything (including coordinates and a describtion of what is seen) which is in your map and that you just have to put them together.

That’s not how I work.

I love these travel-assignments, because they give me a goal to travel the GZ-world on foot with the chance to find new things not yet seen before. I do have a lot of pictures, but they are most of the time not what I need. Heck even those that I just made I probably replace with nice weather ones.

But it’s always night, misty, or snowing when I need clear pictures.

Ok, what about this, as I haven’t seen such a route yet…

Could you make a hike route for trails?
In some of the last updates they were added at several places. I don’t know, but is the one at the starting location new with Dark Skies?

I take this as example for what I mean with trails. It leads to a small camp with tents next to Yttervik. 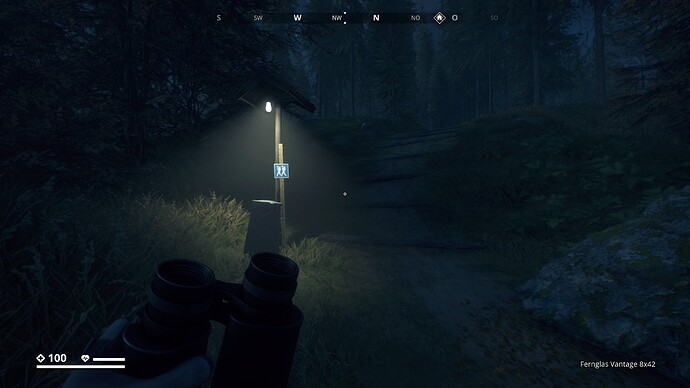 Yes, I know these trails well. I added them to the map too. But yes, these hike-trails with the Infartmarkörs would make a nice route.

I always wondered if there is a mystery behind that, like with the apples, or if it’s just for fun.

The devs probably wanted to show us the subconscious human activity in camps, where there is nothing else to do. In this case playing with empty bullet casings. It is part of the story-telling.