During my year and a half long journey throughout generation zero’s swedish countryside never once have I thought “man, I wish I had a bike right about now” and that is because they have no utility what so ever besides glitching. I think that a motorcycle or mountain bike would be quite a nice change instead of going 2 mph and only being able to use roads. Maybe you could win the motorcycle from that race mission in fnix rising? I am still thinking that through. But currently I am certain that unless you are bored and/or overweight using a bike is the least efficient option. Thank you for reading

Me and my friends mostly Walk or run. With a few exceptions. Like if you die and have no adrenalin. Then you can ride the bike to the fight to get there faster. And sometimes when we are looking for fights we ride around.

Bikes are optional and they are there for those who like them. Using bikes isn’t mandatory.

E.g for me, melee weapons have the same level of usefulness as bikes are - fun for a bit but overall - useless.

I think the bikes are meant to be more of a novelty than anything else, akin to all the crazy emotes. I believe that cycling is also a favored mode of transportation in Sweden, as well, so it adds to that Swedish flair. We use them just to have some fun and try some crazy stunts, in the game. Cheers

Bikes have their uses, but I don’t use them often. Maybe if they were more customizable, I would like them more.

I use them but I agree, bikes are almost useless, at least they should be as GTA bikes are, which are harder to fall and can climb at least a bit more than they can in GZ.

Yeah, the bike sucks. It’s very poorly implemented and I can’t tell if they did it just to test the feasibilty of vehicles or if they just made it to convince the player base that vehicles wouldn’t fit in.

Well I kind of think of bikes as a sorta: Hey you guys want a vehicle? Sure have a bike. And back when bikes came out everyone loved them then it was just like oh we didn’t really need or want them thant much anyway.

They are still fun Occasionally though.

As a new player, my brother and I immediately thought we had made a mistake on this game. And the only reason was because of bicycling. There are two reasons I’ll go into below: it doesn’t look good and it doesn’t handle well at all.

The way the character sits on the bike looks way too stiff and upright and doesn’t look natural. Watch people ride a bike and you’ll see the bike tilt from side to side when pedaling. Peoples bodies move forward when riding as well. It looks like it was put together too quickly, and not enough coding was put into it. Considering this is one of the only ways to see your character, this is a very important moment the devs should focus on a little more. Players should be able to envision themselves in their character, and that’s not the way I would ever ride a bike.

The handling needs some work as well. When riding a bike you’re able to turn back and forth much quicker than in this game. Turning in and back forward takes way too long and it makes it very hard to handle, and again, not natural at all. I ride mountain bikes myself and immediately realized how realistic riding over bumps is on a bike, crashing on stumps, and riding up hills are as well. But because there is so much detail here, why is there no detail with handling? I would think the handling should match that level of detail. Maybe it’s complete coincidence that bumps, crashing, and hills match reality. But if it is, then at a minimum the handling should be reworked anyways. It’s funny at first to watch a buddy crash and even yourself. But when it happens again and again, it becomes very frustrating and ruins the experience. Reworking the handling to turn quicker would lower the amount of crashes and be much appreciated.

Also I’m confused why there is so much detail when going over bumps and sticks and not making it up hills etc. It requires players to think kind of hard about things to avoid and how to maneuver the bike. This effort it takes makes players think that this is a huge part of the game. Which if it is, then advertise it as such. Include a bicycle on the cover so players know what they’re getting into. But when it’s not included and players are blindsided with a task that causes frustration, it ruins the game. I think players should be able to go off-road without worrying that any stick they roll over could throw them off of it. I think the animation should be that the bike is just barely above all sticks but it just slows us down. Bumps are ok, but not one that throws you off the bike. Cars, large logs, etc. are fine. Throw us off those, we deserve it at that point 😂.

Maybe include a mountain bike that can handle the off-road better as well. This site talks about the history of Swedish bicycles and how popular mountain bikes were in 1989.

I say all this because this single-handedly caused my brother to return the game on Steam. He said he thought the combat experience was great but hated biking. And because of that and random game crashes he returned it. I stuck it out and love the game but I will say the early levels make it difficult to like it. The gameplay didn’t start to shine for me until level 15-20+. I think making these changes with bicycling would help players like my brother stick around long enough to understand how great this game is.

Let me know your thoughts 🙂.

I use the bike always, because I do not think it handles that badly once you get the hang of it. It’s tricky at first, I give you that. But to me that trickiness is part of it’s charm and can provide a lot of smiles when it gets challenging. Yesterday I saw someone attempting a fastest run and he was using the bike. He even knew where to ride on the roads to get it go the fastest. I saw him fail to get onto a slope, where I know for sure I can get up there. I can ride the bike up the stairs in bunkers. Most of the time I can manoeuvre the bike past obstacles without crashing into something, but obviously not always when I get my fingers in a knot. Needless to say, that I really enjoy riding the tricky bike to places you think it can’t go. 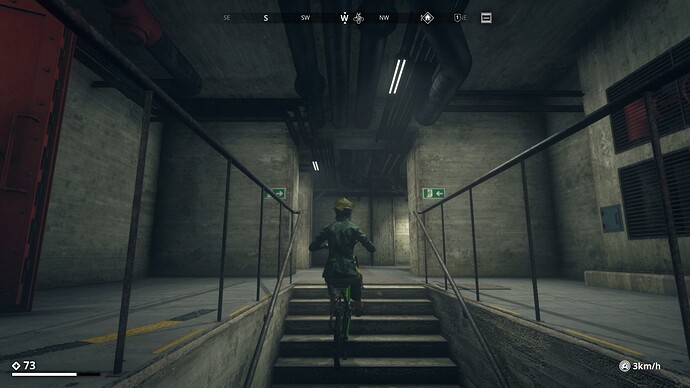 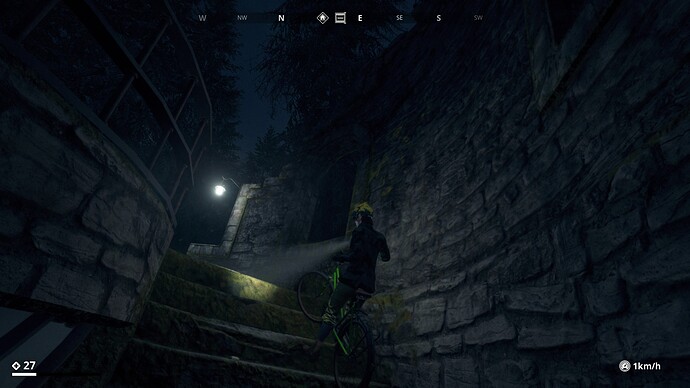 Let me know your thoughts

Before interactable bikes came, there were (and still are) plenty of street bike props in the game and a lot of people asked if they can ride it (make it interactable). Eventually, devs gave up to loads of player requests and they added interactable version of the same bike as well. But since that bike is a street bike and not a mountain bike, it won’t be any good for off-roading.

Street bike is a smooth hint for players that vehicles aren’t welcome and it is intended for players to walk the entire map.

Once you get points in movement speed and stamina, it’s fine to walk the map. But in the early levels the bike is very necessary. It takes way too long to walk from place to place. The learning curve of riding a bike is too steep. The game is about killing giant machines, not riding bicycles. But if they are going to implement it, then they should do it right. I encourage the devs to go out and ride a bike and they’ll know what I’m talking about regarding turning quicker; it’s way too slow right now. And the way the character sits on the bike is not natural at all.

If the devs purposefully made the handling terrible in order to turn players away from using bikes, then they made a big mistake. Because to players, it doesn’t look like they did it on purpose. It looks like they’re bad at their jobs (sorry but it’s true). And it makes the game look bad overall. I bet bicycling in it’s current state is starting to turn new players away, which lowers the likelihood that those players will spend more money purchasing the dlcs.

The learning curve of riding a bike is too steep.

You can’t be serious.

My son doing a wheelie…

It just takes time and practice to master.

Yeah but “once you get the hang of it” is kind of the problem. It turns something that doesn’t feel normal at all, into something normal. If they just make it normal from the start, then there wouldn’t be such a long discussion in the forums about it.

Sorry but, “Part of its charm” sounds like an excuse for lazy coding.

I’m putting pressure on these long standing ideas because I see how damaging they are to the progress of the game. I really enjoy the game, but I also see how much potential this game has. And I think if they put more time and money into it, it could turn into a top tier game; like top top. But it’s ideas like this that slow it down.

The handling of bicycling isn’t about going straight, it’s about the turning. It takes too long to turn and to unwind. Go ride a bike and you’ll know what I’m talking about.

Sorry but, “Part of its charm” sounds like an excuse for lazy coding.

Either it is deliberately coded poorly or the Apex Engine isn’t capable of producing any better vehicle movement as currently seen in game.

I lean to the latter since there are few missions in-game, where we can see vehicle driving. And i got to say, it looks way too clunky and strange.

Btw, Apex Engine is designed for MMO and beautiful scenery. It isn’t designed to be a racing game’s engine, for it to have super smooth vehicle controls and interactions.

My response to the “part of its charm” comment was revolved around the handling. This wouldn’t require any complex coding. It’s something that is currently there, but just needs changing the number. The sensitivity on the handling (or the like), would be the change. Changing that field from e.g. 0.5 to 1.0 would be all that was needed. Which I think 25-50% increased sensitivity would be far more accurate than what it’s currently at. That’s all I’m saying

That fix doesn’t look realistic either, especially at speeds. Since the faster you go, the harder it is to turn the wheel.