Cheaters, when will you prevent this?

So I’ve posted about these issues before, but it’s starting to get very annoying, even though this isn’t a competitive game. Not only do they max all skills, they also cheat on everything else.

This fella had a grenade launcher that acted like a minigun, shredding everything in its path to bits in seconds, including tanks and rivals. It’s getting more common by the day, and since my only choice to play this game atm is by joining others, this is what I have to deal with from time to time.

Is it really that hard to have a check in place that first of all checks if the character is legit or not, and then checks for other things?

Even though this is a coop game, do you really find it fun to play with people like this? I do not. 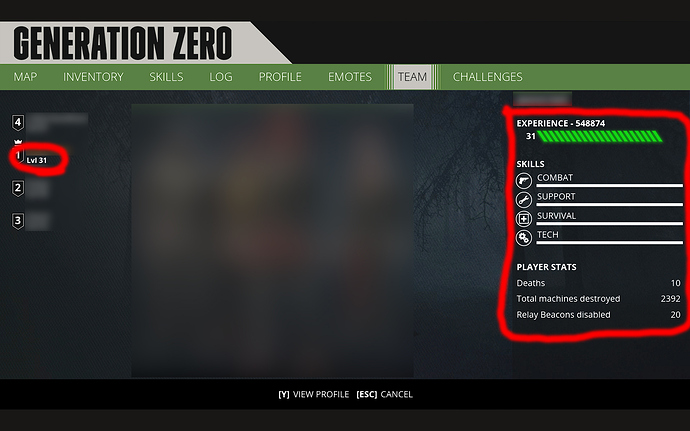 I wouldn’t want to play with people doing that either, and I’m luck to have friends I can team up with. Finding good games in public is harder than it should be, but part of that is due to the kinds of people you find in the 'net

I guess it hasn’t really been priority since GZ is not a competitive game. But if you find that someone’s ruining the session because they’re cheating, that’s definitely not okay.

I don’t know the amount of work required to implement anti-cheat software, unfortunately.

Edit: The EULA actually prohibits cheating via third party software. It’s possible that the offending party using cheats could be reported via Steam. Though I don’t know if it’s something to contact support about. Perhaps a dev could fill in for me, here.

it’s not competitive so I can understand them not prioritizing this right now. I think one solution could be to give us an “avoid player” option. then if you join a session and run into someone doing it, you can exit out and try to find another game without getting put back with them.

I think one solution could be to give us an “avoid player” option. then if you join a session and run into someone doing it, you can exit out and try to find another game without getting put back with them.

Yeah. And if I’m the host I would like to have a personal black list tied to the game/steam id (not the the nick since people tend to change nicks a lot), so that I can prevent them from ever joining my game again (when the day comes that I can actually host a crash free game again, lol!).
Some sort of report function would be welcome as well.

I tracked down one of these cheat programs, and that program alone has been downloaded close to 8000 times. Now I know that 8000 downloads ≠ 8000 cheating people, but it’s an indication at least.

If they want to cheat, it simply means they are incapable of playing the game or are unable to handle a real-life robot apocalyptic situation. I can understand a learning handicap…

The may could add an block player option , so they never run into your session again or the reversed . Aslo i think the thing with the rocket launcher it is an exploit and it must be fixed from the devs themselves .

I’m pretty sure that this particular guy was using a program to cheat, I can provide a screenshot of the program I think he used.
Not sure which exploit you mean, is it the one where you can attach any ammo, any attachment to any weapon? The weapon he was holding was the grenade launcher, with infinte ammo, and no reload time.

The worst part about this is that it’s not even a competitive game. In one month, I’ve maxed out my first char, obtained 5/6 experimental weapons, beat the main game and the dlc, got half of the FNIX suit already, and that was just literally playing the game. I’ve died 600 times, it literally means nothing. There is absolutely (Generation) Zero reason to cheat. We need to report those people. I propose we delete their accounts for screwing over other players like that

Ne permadeath so why cheats it makes no sense.

@Hardcorewolf7 exactly. You lose nothing when you die, you GAIN experience, and there is not one location on the map I haven’t been able to fight my way into with no cheats. People who cheat in games like these shouldn’t be aloud to participate

When i join MP game, i’m used to instantly check others out via Team tab to learn others skill set and K&D ratio, so i can get the idea what gameplay style they might use and how good they could be. Due to that, i’ve seen quite a few max skill cheaters in my days. Have screenshotted most of them as well (can post those under collapse tag).

As far as dealing with them goes, and if they are not the host, i notify the host and almost all the time, either the host kicks the cheater or cheater leaves on it’s own. If the host cheats, i don’t stick around for long and quit. Also, i’ve reported them all via Steam. Have no knowledge what has happened with them but i haven’t seen same cheater more than twice.

I also call out the cheater and most deny it until i provide proof that they can not deny. Some accept the truth while others still deny it. But the main reason why i call cheaters out is to talk with them and learn why they cheat. Most say that they started solo and game was too hard for them while some have said that they want all skills on same char (which cheats can provide). So, there’s that.

@Hardcorewolf7 Btw, you can cheat on consoles too, if you know how.

I can understand people giving up and cheating to be able to finish the game. Or just getting bored and wanting to play around like that. I dont mind them being able to play multiplayer with others doing the same thing but I don’t want them in my game. I used to have an issue where a player would join my game, fast travel near me and drop a bunch of stuff, exit game, rejoin and drop some more over and over. I guess it was an attempt to help but I didnt want it. Had to keep kicking them whenever they joined.

There should be some way of detecting some of the cheats and disabling achievements and challenges. Those rewards should only be for people that actually earned them.

Yup, your’re unlikely to find people modding on console, it’s just not worth the risk of being perma-banned by MS / Sony.

Plus, blocking a player via Xbox Live is trivial. I’ve had a couple of players “griefing” on Xbox, but it only takes a couple of clicks and you’ll never see them again.

I assumed it was just as easy via Steam tbh. Can’t you block them and move on?

If you look at the screen shot they’ve got max stats; which is impossible to get legitimately.

There are “trainers” for it on PC (allegedly) which allow you to unlock all skills, increase damage, invincibility etc.

The “any ammo etc.” glitch is annoying, but at least on console it’s easy to kick & block if you find that sort of thing annoying.

Disclaimer:
I’ve only ever played it on Xbox, but have seen screenshots of people using trainers. Personally, I’m totally against that sort of thing especially in a multiplayer game where people are playing legitimately. I’d like to see cheaters match-made with other cheaters. That way they can do their thing, and we can do ours.

Everyone here can agree to disagree all they want on cheaters/cheat software, but Generation Zero is primarily a PVE game rather or not the player is playing solo or co-op. Sure playing with friends or even randoms is good & all, but the online stability still has a lot to be desirable.

Would it be ok with a “name and shame” thread to warn others of known cheaters?

Three of them, just this evening alone.