Hear me out cause this may be a lil difficult to follow.

Basically, beacons don’t really have a game mechanic attached to it and it could. Beacons coordinate and communicate with bots. The hacking skill remotely communicates with the bots to take it over. The 2 should affect one another.

As a game mechanic, I think these beacons should affect difficulty/time a bot stays hacked(whatever is fair). No beacons in an area should give some sort of bonus to the hacking skill. No signal to regain control means that the robot’s internal mechanisms or programming has to take back control. Without that signal, it should be easier to hack a bot or the time should be extended or both.

Incorporating this game mechanic would allow game devs to add more beacons to cover an area and make more checkpoints the players have to pass through that are guarding them. I think this would make the game funner as it’s also a symbol of taking the country back from the machines, beacon by beacon. Of course, the bots have their internal programming and will still be everywhere, but, their ability to communicate with HQ would be limited and that isolation from their home signal should have a mechanical and story benefit.

See what I’m saying? This could be huge.

I want to understand your point better. Are you saying that if a beacon is alive it makes it impossible to hack an enemy, and if the beacon is destroyed enemies are more likely to be hacked? Because that would be cool and I completely agree. An extra mechanic would make sense to include with beacons.

Very cool idea. I would like to see that with an active beacon the hacking skill works like now. But if you destroy it the hacked time would be 2-3 times as long and the chances for an siccess would be significantly higher. The buff this skill seriously need

I think the hacking skill is really underpowered. I can’t play test different developmental changes to see what would make it feel more balanced, but when I think of other things that compare, hacking doesn’t hold a candle. You can take a tank down faster and safer with a PP pistol than if you hacked another tank to battle it. That, I’ve done and tested.

A level 1 guy with enough ammo is more powerful than someone who takes the hacking specialization. At best, you can bring down a weak runner with that tank you hacked…but it’s unlikely. Seriously, why is that unlikely ya know? I don’t think it’d be fair to augment robots you hack, so I think upping the duration is definitely needed for balance, but in addition to that, a mechanic with incentive would be nice like what I’m proposing. You have 3 overlapping beacons, all guarded by at least a pack of runners if not some hunters too. Bringing those 3 down strategically should give you a reward of a lowered difficulty.

I guess my suggestion is to make hacking more balanced. It’s weak and unbalanced in it’s current form. I think everyone would agree…it’s a given…but, either change the AI of bot on bot combat to be more aggressive so they can actually get something done in that 40 seconds(more than I can get done using a PP pistol shooting), and/or increase the duration of the hack. In addition to that, there can be a story driven hook where you have to tactically take out beacons in an area to lower the difficulty of the hack and make it more effective. And again, that first change the AI or Duration is needed because why would you go through the hassle of taking down maybe 3 overlapping beacons in an area to lower the difficulty on a hacking skill where a tank maybe stomps around a single runner and slightly damages it when I can shoot it once and do the same amount of damage?

Better AI/Duration and Strategically put more beacons in the game that are heavily guarded and overlap to affect difficulty and make the Hacker specialization fun to play. Hope I’m making more sense.

but, either change the AI of bot on bot combat to be more aggressive so they can actually get something done in that 40 seconds(more than I can get done using a PP pistol shooting), and/or increase the duration of the hack.

Even if both are done, it still won’t be enough to make Hacking beneficial.

Because machine weaponry is great against players but very poor against other machines.

From Guide: "FNIX Rising" side missions topic, comes this video and just look how long it takes “allied” machines to destroy other machines. 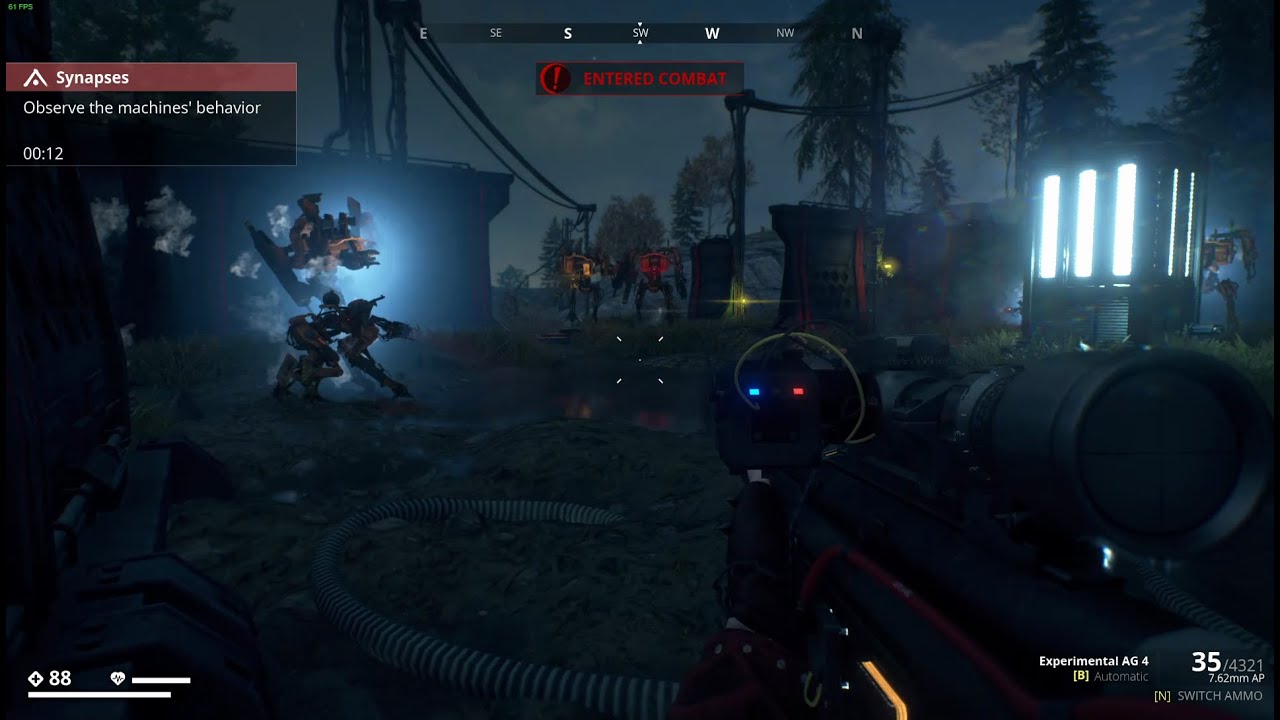 I agree with you. The machines dont even aim for their components. Like in your video they only shoot in the rough direction. And as your shots the do very litttle damage when they dont hit comonents.

I agree with both of you as well, but I won’t say it’s not entirely beneficial. How about add another thing in there where the robots prioritize the hacked robot instead of you. This could allow you to have a good whack at killing the distracted ones. Not a total loss…and with the commando survival tree, you might just disappear off their radar. IDK, what do you guys think about that?

Yeah that’s a good idea. Almost as if there’s an imaginary flare on the hacked robot. That would actually make it (possibly) worth it to invest points in.

Yep. The hacking skill is a bit under valued. Its a really unique mechanism for this game and it would be good to see it expanded. The ability to hack a bot directly for a short period of time is a simple mechanic with a simple outcome and its a nice idea to add to a run and gun type game. But it could be a whole lot more.

It would be interesting to be able to remotely hack a bot as is currently the case, but then to be able to reprogram it… permanently after you have isolated it and get close enough to upload some code to it through some local contact. This would be a high risk but high reward strategy that gave you permanent control over the bot… at least until it was destroyed or ran out of ammo or fuel.

Being able to task bots with a simple set of orders such as attacking a marked target, harassing a target or communicating with a target bot would make the hacking more interesting. Using your hacked bots to capture other bots which you could then hack would allow you to build up a small force of bots. (you might want to put some paint on them so you can visually differentiate them in a fight…)

Another idea is that relay beacons might be a much more interesting target to capture if you could use them to hack into the local bot network and change the orders of bots in the local area. Then perhaps take control of bots in the area the beacon is “controlling”. If you could order a bot to travel to a particular map coordinate, or a set of way points, it would be a good way to set up ambushes or strip away bots from a location that you were trying to access. Tasking a bot to go and attack other bots would be obviously ideal but might be a bit Over powered. But it would make hacking a much more interesting skill to specialise in. However it would make the single player game where the player did not have hacking more challenging.

Suddenly, having a hacker on your team working the bots through a local relay beacon would make for more complex missions.

This would make beacons a strategic target for a team who was working on a mission. Much more valuable than a simple random encounter.