In the new side mission, Aamiina mentions a detail about the Soviet soldier shes “befriended”:

“The lower part of her leg is made of some kind of metal, but it does not seem to hinder her - rather I believe she runs faster than any of us can.”

It seems like the idea is already there, maybe they could let us harvest these exo-suit parts off of dead soldiers?

I don’t like the idea of body modification for gz.
But what I would agree with would be, if the clothes you can find or get would bring their own special abilities.

There already are exo suites. But just for your eyes. They could give these clothes some special, not changeable, abilities like running faster or jumping higher, throwing further or with a greater bullet resistance.

Additionally there could be some benefits for using one of the occulars like better targeting or an instant optical improvement like seeing the outlines of enemies even through hedges or thin walls.

So you can decide not just to wear a set of clothes or to build a set of complete bullet resistant clothes, but to improve special abilities by using special clothes.

Know what I mean?

Anything else would change the game too much in my opinion.

I would rather have a exo-sceleton or a X-Ray vision module mounted on a helmet than body implants. The exo-sceleton would fulfil the same purpose, like to be able to jump higher, reduce recoil, punch/kick enemies or carry more weight but imo fits much better in the world of GZ. It is even already modeled.

currently the game is incredibly easy, walking around with your weapon annihilating everything you see no challenge. we don’t need ways to make the player stronger or to give the robots more health. the player needs to do something to survive besides eat a medkits after getting shot in the head by a railgun literally twice the players size. there is no strategy, stealth, having to make traps and scavenge to survive, there is just run around and shoot robot.

a few things could.be added to fix this. food is one but nobody seems to like that idea . but food would give us something to do besides run around blowing stuff up.

something else is player health. the player is far too strong. literally just get 400 bullets to the chest and eat this green square and your unkillable. there’s a game called Kenshi with a far better health system. each limb has 3 stages of health, also the head chest and stomach. when injured if a bandage is not applied they will bleed. each part has 3 stages of health, green means it works fine, yellow means the limb is slower and weaker, and red makes it go limb and become useless. you apply a bandage and it heals over time.

not saying generation zero should copy that but a system where you apply bandage to the wound and it heals over time wod be better.

and also the robots aren’t scary or a threat anymore at all because they die so easily.once you get good weapons.

wow didn’t realize how much I wrote

Gz already had a bunch of facilities of the cyberpunk genre, I mean the premise is a guy and a scientist team digitized his brain, and somehow use military soldiers brains, to control machinery that then went all awry and dystopic.
Ghost in the shell The Matrix Blade Runner even Terminator are all similar scenarios of cyberpunk esque facilities we can see very clearly in GZ.
I think there’s a typical presumption of Cyberpunk in its Neon-Noir aesthetic of today. Which you can’t do much about sadly.

You didn’t really answer my question there. Does GZ need to become Cyberpunk?

As it’s been stated by others in this thread GZ has become an easy game. Part of that is because instead of making machines tougher and smarter, the players have over time become stronger and stronger. The plundra expansions, Experimental items and the weaponwheels don’t add difficulty or strategy at all. At least when it comes to the end game. Once you hoard everything then it’s easy as breathing.

What I feel that GZ personally need is content like Alpine Unrest (something that is finished and not to be fixed later), not more changes to the foundation.

I did but I will again GZ is already cyberpunk, just as much as it is sci-fi.
And for difficulty i do plan on discussing that in my upcoming video

As for the other folks in this thread, i highly urge you to create separate threads on features and ideas you’d like brought to the game. That’s how they happen!

p.s I’m all for functionable exosuits - 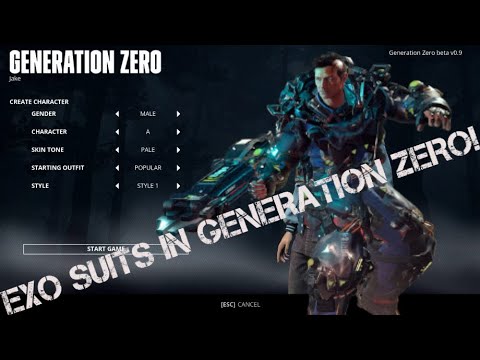 I think it would be cool to have a killing animation. Like a finishing move of sorts. Like when you disable all of the tanks weapons you could climb it and rip out something vital to it and disable it.

It don’t think, that playing GZ is too easy in general.

I talk about walking around and fighting machines. I’m not a bullet sponge. I can die within 1 or 2 shots if I got hit, depending on the weapon that hit me.

What makes the game so easy are some other things around I would like to have changed in some way.

Remember: with respawn you can get where you want without loosing anything and no need of healing!

If there would be some kind of penalty, we would think twice.

We are just as strong because of these missing limits and penalties. That’s the only thing which let us feel that this game could be too easy.

a system where you apply bandage to the wound and it heals over time wod be better.

And that’s what I don’t think, therefore my other perspective. Of course it’s not realistic to survive all these hits of the different weapons. But it’s just a game. To be in need for bandages after each hit and have to wait until they did their job takes much too long compared to the current intensity of battles. You would have no time anymore to fight… Or to escape. Too open world and too many enemies.

We are a teenager in a Swedish island in the 80s. Cant we just have it that way instead of turning the game into Cyberpunk 2077. And where whould we even find these things? I dont think FOA made such things and if you say FNIX made them then why? FNIX doesnt use humans. And again this game is taking place in a world that looks like Sweden and is Sweden in the 80s plus the machines. Do we really need to make it an extremly alternate history cyberpunk robot terminator game?

I agree, but the clothes are already there.
FOA Exosuite and FNIX Exosuite (which seems to have been built by resistance engineers).

And there is for example the experimental occular.

I could agree that is more sci fi, but you are missing the punk of cyberpunk. But to say GZ is Cyberpunk is just wrong.

You could argue it’s cyberpunk because of the FNIX machines, but the devs wrote and made the machines in a way that seems reasonable. It’s done in a rather grounded way. Cyberpunk is defined as “dystopian futuristic settings that focuses on low life but high tech”. While GZ does take a lot of inpserations of Terminator with the AI gone rouge and killing machines, it doesn’t become Cyberpunk just because of that. It would actually have to develop the punk aspect.

And i get the feeling the game is more of a cold hard War survival game and not a crazy wacky cyberpunk game.

And where whould we even find these things? I dont think FOA made such things and if you say FNIX made them then why? FNIX doesnt use humans.

Not yet but I bet they will. @tene is seeing a pattern here that is obvious since Landfall with the surgery of robot leg to work with a human body. Again Base Assault brings the same character to stage.

We have the Sovjet technology that is like from a far future (granted, that is sci-fi) and just imagine what the ‘virus’ is evolving into through that technology. Sovjet version of FNIX would make these things happen as many already are second guessing here.

I’m pretty convinced that these plans are already fleshed out at Generation Zero HQ and will make Tene happy. Someday. But maybe there is a tug-of-war at GenZ HQ about what direction is acceptable and this entire discussion is very interesting as a reflection of what the developers may have to deal with and how to get there to make everybody happy. Some things float, others don’t. But eventually they may even fly.

(Ps. See what I did there, introducing the concept of flying robots that actually are not planted in the game already? But hey, don’t get side-tracked now…)

I mean just that i dont think GZ should go that way, i have said what i think about it and i dont think GZ is that type of game. We are a teenager fighting for Sweden and humanity in an island 1980. And i think this game doesnt need more sci fi elements.

Edit: yes exosuits and that could work i mean like machine legs or arms.

Body mod is a big no from me. That’s taking the game a big big step away from the original concept. It’s already strayed away too much in my opinion. But I still play because I like the fighting against bots. But I do miss the days you had to sneak around to survive.

And for making the game harder. Just make medkits rare and harder to find. As of now you never risk running out no matter how often you get hit. With fewer of them you need to be more careful. And carry capacity should be less so you need to consider what to bring and what to leave when you go to a fight. It could be an optional thing since many people like to have all weapons with them.