Why are everybody so keen on eating Swedish food? In Sweden they eat “surströmningar” that is basically rotten heering left to ferment in a tin buried in a hole in the dirt and left to decompose for three months. When opened it stinks of rotten eggs due to the high level of hydrogen sulfid and is therefore only allowed to be consumed outdoors. The tin will usually explode when brought on an aeroplane and therefore Arlanda International airport consider it a weapon of mass destruction and has it on the same list as explosives, gas cannisters, and hazardous chemical compounds (https://visitsweden.com/fermented-herring/. If we have to eat twice a day to play the game, I would have to cross the bridge to Denmark to get some decent food.

I’m very keen on the idea of eating, drinking, sleeping and actually putting on bandaids (instead of your teen age warrior just dabing a medkit against their face, turning their vision green for a second…) and it’s not for added difficulty, for me these things are crucial for increased atmosphere and immersion.

I would also love the choice of a “nightmare”-mode where medkits take longer time to use and demands you to stand stil for 15-30 seconds, limping if you hurt your legs, worse aim if you hurt your arms, slower healing of gunshots, having to cook some of the food and water for it to be safe, not being able to keep much food down if you’re to injured, having to sleep and also having trouble sleeping (because of the trauma of fucking warrior robot army destroying your home!).

Yeah, if you eat Swedish food, you will be sick alright

My only experience of Swedish food is IKEA meatballs and Dime bars. Love both as it happens. There’s even some meatball sauce packets at one of the campsites. 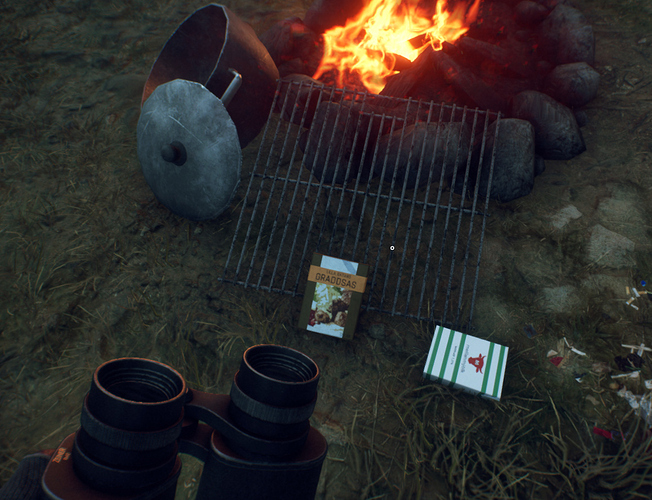 Then what’s the point of it all?

… and in Sweden they don’t put ketchup, mustard, and onions on a hotdog. The put … shrimp salad!!! Okay, to be fair, Ikeas kjöttbullar with potetis and gräddsovs are truly magnificent

Okay, I’ll try to be serious for a second. Before adding hard physical needs like eating, drinking, and sleeping to increase realism to the game, fast-travel and the Plundra simply have to go. I could understand that eating or drinking a bit would restore a few health points. I would find that a fine addition to the game. But if you could die from not doing that, while still being able to happily teleport from one end of the world to the other while having a Plundra portal to all your stuff … that would be very wierd to me. Teleportation and the Plundra are conveniences to facilitate gameplay. But they are hardly realistic. So someone has to decide what kind of game this is. Personally I chose GZ instead of Dayz.

I too believe it should be an option to turn something like this on and off, and a thirst, hunger, and fatigue system would make the game way better. Also temperature could be a neat system to add, but again, they should make it optional. If they do implement these things, they should try and make the depletion of hunger, thirst, etc., bars realistic. The water depletion bar would hit zero in 3-4 in game days, causing negative buffs to the player until they get to an acceptable level of hydration again. The food depletion bar should hit zero in three in-game weeks, again, giving negative buffs to the player until they eat an acceptable amount. Tiredness might be a good idea, but judging by the amount of beds on the map it would almost have no effect on the player if implemented. I really hope the devs take a look at this thread! Thanks

Something like this can only work if implemented correctly.

In other words; combined with scavenging/looting or perhaps simple crafting.
DIY food and DIY weapons/survivalkit.

Obviously I have nothing against this as long as it’s a separate mode, but that said, I honestly don’t see the point. We spend a lot of a time in houses where the electricity, and therefore fridges and freezers, are still going. Food is plentiful. In the end, I would expect something to the general tune of,

1 - People complain that if food is needed, raiding shops should be an option, and that the lockpicking skill should probably open them.

2 - Avalanche have to create interiors for all shops, taking away resources from other tasks.

3 - People complain that now that they have to carry more, there should be more inventory slots.

4 - Avalanche add more inventory slots, taking 12 months to get around to it, and taking away resources from other tasks.

5 - Game is now exactly like before, except with more boring busywork.

6 - People will rightfully complain that since all of this was in the name of realism, there should be no eating without pooping.

7 - Avalanche add bodily functions, as big an update as bikes, and therefore worthy of an updated game icon in the steam shop. “Update: Poop”

Now don’t get me wrong, I’d find that as hilarious as the next person, but that sounds like a lot of work for a “lol poop” joke.

On a slightly more serious note, I could see that working in a setting where food isn’t readily available in every house you come across:

3 - Get water from freshwater lakes/streams

4 - Add lurker robot that hides in the water and pulls you in and drowns you as you top up your water, a crocodile to the existing dogs

Yes, if shortage of clean water and food should be an issue, then the entire story should move out of Sweden, one of the most wealthy and socially responsible societies of the world, where the food problem isn’t how to get it but what to choose. And canned food, which we find in abundance because Sweden is always prepared for war or crisis, can last for decades (except for Surströmmingar which are already stale when canned). And open a tap in any kitchen and you’ll have an endless supply of some of the best drinking water in the world. Again, improve your health status when eating a snack, but please don’t take away resources from developing the story.

Personally I chose GZ instead of Dayz.

I love the idea of GDayZ myself.

I think I mentioned before that I choose to never fast travel and as soon as the Plundra was introduced I thought having the same contents available everywhere was just… very weird.

The player can choose a hardcore mode already by playing to a set of rules they implement themselves. I know others do not use adrenaline and choose to limit their carrying slots, etc, etc.

There’s already scope to make the game experience quite different than the “vanilla” game.

About power in homes - the game is set just a day or a few days after the crisis began. Give it a month (more or less) and domestic electricity will go off. Then its tinned or dry food only - or hunting and fishing and open camp fires. The world in an apocalypse gets very different once our 21st century comforts go away.

Its interesting to chat about this but who knows where the devs want to take their game?

They have already talked about how they most likely wont add animals i think maybe because of budget and i personaly dont want hunting or animals. I need to save my ammo for the robots

Its interesting to chat about this but who knows where the devs want to take their game?

Indeed. I’m sure that the devs have a course plotted for where to take us next. But it’s fun debating it anyway

In Dayz you are at least fighting/cooperating with other humans. In GZ I am (by choice) alone. Having completed all missions I only keep playing in the anticipation of new stories to come and unfold. If the prospect was trying to survive on canned Surströmmingar and lukewarm Blue Pripps in an evacuated and deteriorating world, I would stop playing it now. I would get way too depressed. When I roam the shores at night I find myself scanning the horizon for glimpses of light … as if someone was sending me a message in Morse code.

Literally have been waiting since March to see if it is ever going to happen. Occasionally checking the forums for an update. I prefer (this is my opinion) to have things like setting up a camp and going out and searching for resources (other than just bullets) to stay alive. I’m not going to hate the developers or other players who don’t want this, I’m just not going to play until the game becomes something I enjoy. Myself and others have requested this as an optional game mode. If they add it, yay. If not, I’ll continue as a gamer playing other titles with a little more immersion than a point and shoot game. For everyone who says it doesn’t need it, I won’t agree or disagree, that’s your opinion. Say what you want, the game is built perfectly to fit in the survival genre. …and honestly, I feel that’s why there are people here who would like to have these core elements implemented into the game.

What other more hardcore survival games are out there that you’d recommend Kinsman101? I like SP or co-op, the one thing that put me off DayZ was random nobodies sniping you from half a mile away. That’s why I enjoyed my DayZ time most on PvE or roleplaying servers.

I do not do horror however. Just can’t stand it!

What keeps me playing GZ is the immersion - the beautifully crafted world and its weather and lighting. I can forgive so many bugs and other issues for a deeply immersive game. That also kept me playing DayZ for years - running around Chernarus was simply entertainment in itself.

I hope you get the option to then.

but to me it would simply be annoying.

On a livestream Q&A with Pontus and Mat today, they said this will most likely not be put into the game. At least at this time.