I would hate them too.

but to further explain
something like a runner but it flies a bit higher like 2 or 3 meters above what a Seeker normally floats at.

Great ideas from all of you tho the most prominent ones present in this thread are I think a little to ambitious for a game of this calibre.

@J053phH1.LL
Ambition is what makes things great, my friend.

Yes I know but to much of anything is never good.

There’s NEVER enough of variety…
They can be done, and be swapped out with already existing units.

I agree we need more machine variety but we should keep them within the realm of their linear purpose with a few exceptions some of which your list includes.

I love the lo-tech look that we’ve got. It is just about believable for the day.

Anyway - stop this! I have enough trouble as it is…

I didn’t know you could turn off music! Oh, rats!

You cannot EVER have enough trouble!

I really can! I hate dying, I take it personally…

Why?
It puts all in perspective… we often think we’re in actual Godmode…
We’re so not, believe me…

Somebody put it best in another post somewhere - the more you die, the less you care!

As nice as new robots would be I would like to at least see a new tier. Tier 4 could be a rare spawn or only found in the upcoming new areas.

@bittymage
Why a new Tier?
It would be the same, just tiered up, no?
Too much of the same… is boring…?

What about a new aerial drone, cause Seekers are just to search areas for activity. For this idea, something much bigger. Closest thing I can think of is similar to the aerial drone from The Division 2, but not so heavily armed, which could also be the large aerial drone that does a sweep an area and moves on. Something from the air that attacks you would be a nice change. Cause having drones patrolling the skies would give more of the feel you are being hunted. Something like a Helicopter like drone maybe, not designed like the seeker.

@MattiasCN
Why less armed?
it has to be with the ‘time lore arms’ of course, but…

Have you ever played Arma III? In that game, fighting against Americans ends if such disaster. A medium aerial drone with at least a single weapon, while a more aggressive drone, that can be your “Hell from the Sky”. You can’t just off the bat dump the player in a world and have something like a A-10 and say “Fight”. Need to be gradual and making possible tension as the player makes a choice to fight or remain hidden. It’s scary enough the Tanks now run. >:| 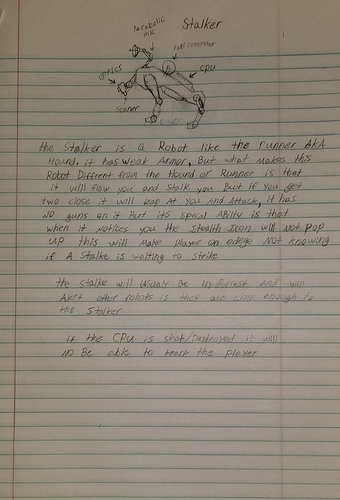