Seekers are just to search areas for activity

I’m not sure how advanced the game is, but I was hoping that seekers would either go looking for patrols to alert, or feed tactical info to the other robots during combat, basically telling them where you are if you’re hiding. They needn’t be armed to make the challenge higher or add a twist to the situation if you choose not to blast them.

hunters that have a cloak device , like the preditor , you can only see a shimmer of light being refracted around them , how scary would that be. also it would force player to use xray on scope to find them. this could be cool. talking of preditor , imagine a stealth bot that hides in trees and drops down on victims lol.

I never made an effort to confirm how seekers work exactly. Of course they make noise when alerted, but sometimes only once (until other robots arrive?). After that they only ping you, I assume it is some kind of radar increasing your visibility to all robots in the range of the ping. Because of the advanced vision modules of seekers, basically no cover helps against seekers and, thus, against any other robot in the range of the ping.

Would that make sense?

@pegnose
That Ping seems a 'mental disruptor" which blurs your vision.
Quite… strange…
And annoying!

Especially when there are like five or even more pinging you.

True. I just guessed it wasn’t the only purpose for it.

@pegnose
And I confirmed it.

The ping is a sonar ping. They’re still looking for you. (Yes, it’ll also do what X said.)
Anecdotally, I’ve managed to lose robots in combat with trees, shelters etc and get the drop on them. I’ve rarely managed that when there’s an alerted seeker present. I suspect they share information but I haven’t proved it.

@Flick
It should be logical they do so…

Right, sonar not radar. The other 'ar.

I am suspecting the sharing of information because I observed
a) so many robots joining the fight with seekers present even if they don’t blow their whistle on you and
b) why would they ping you at all? They already saw you and cannot do anything of value on their own. The blurring of your vision is a minor hassle.

why would they ping you at all?

It’s an assault on your brain, like when they throw a magnetic pulse in your brain scrambling the speech sector and alike.
It distracts vision and hearing, disrupting your actions.

I think they are directing the attack. The ping, sonar or not, finds you wherever you are, disrupts your vision (and sometimes your whole aim) and directs the machines to your exact location…

@Bootie
Funny though, a purely pinging seeker never drew attention to my spot.
So, I think only the horn on them does that?
Then, my game at home does WEIRD things. lol

Now, the latest (?) patch has machines hunting by sound rather than by sight, so yes it could be quite different now. (is that information correct?)
If NOT, then the ONLY purpose is to BLOODY ANNOY YOU by stressing your sight and hearing (thus aim and… well… hearing…).

Funny though, a purely pinging seeker never drew attention to my spot.

I’d guess the range is much lower. It is intended for aiding enemies in closer proximity.

The Seeker changes modes. When it positively identifies you, it sounds the horn to call others to the spot. Once they are there, then it moves to “ping mode” to disrupt and i think keep the other machines inrterested and encouraged. You never “escape combat” when a Seeker is pinging. It will sit there and ping until every machine (and it) is killed, and more come if they are anywhere near.

I remember a siege in a house near the windmills when I started off killing a sniffing Dog, and then the others pitched up, but once a Seeker arrived and started pinging the Hunters came from miles around and the two tanks from the windmills themselves pitched up - well they were well out of earshot of the silenced SMG I was using.

I’d guess the range is much lower. It is intended for aiding enemies in closer proximity.

Well, why don’t we ask this next stream, of how it is intended?

I mean, as said, I never had even close by enemies come in when I was only being pinged…?
Also, why only aim for closeby assistance…
If you got a prey, get them all in, right?

Also, why only aim for closeby assistance…
If you got a prey, get them all in, right?

That is what the horn is for, as @Bootie said.

And why not blow the horn all the time? For balancing, I suppose. It would also be extremely annoying. I wouldn’t want to play like that.

For balancing, I suppose.

We need balance back though…

Geo-Walkers- They have the substantial build of the terrain as armor plating. Like Ghillie Bots but higher grade like your tanks as well as Harvesters.(Heavy military grade drops)

Breakers- These guys are an EMP of transmission that disable your field radios they have radar dishes that pinpoint them out but they have same structure as a tick with minimal armor.(drops parts, often common parts)

Guerrilla Bots - They have sniper capabilities with flash for detection but pack high caliber. Slow in movement but fair camouflage.(Sniper related drops and health kits)

Carriers- Deploy machines based on rank ranging from Tick to hunter. Vulnerable in deployment but quite lethal in fire suppression.(Drop uncommon/rare loot)

Laws- Found around bunkers or police patrol, they have shotgun ammo and often use rush tactics with medium armor. Medium speed, and hit capabilities. They call backup like drones but lower grade machines.

I posted this months ago but here 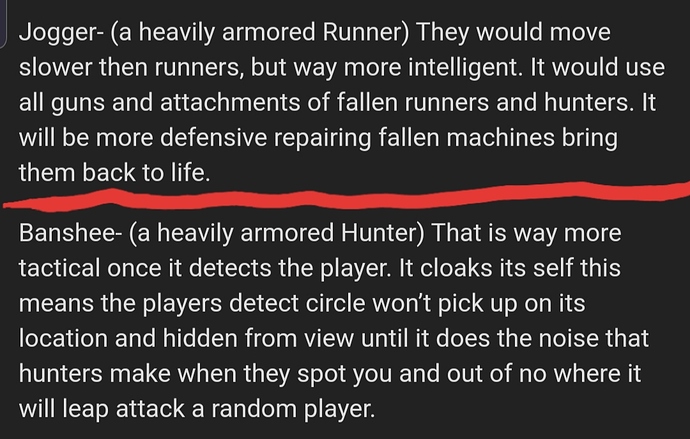