I thought it would be cool to post some of our kill/death ratios on here through screenshots to see where players are at in terms of how many robots they’ve taken down and how many times they’ve been taken down, might be useful for the dev’s to see too, maybe to get an idea of peoples general skill levels playing. anyway, here’s my k/d hoping to get to 5k before 180 deaths. 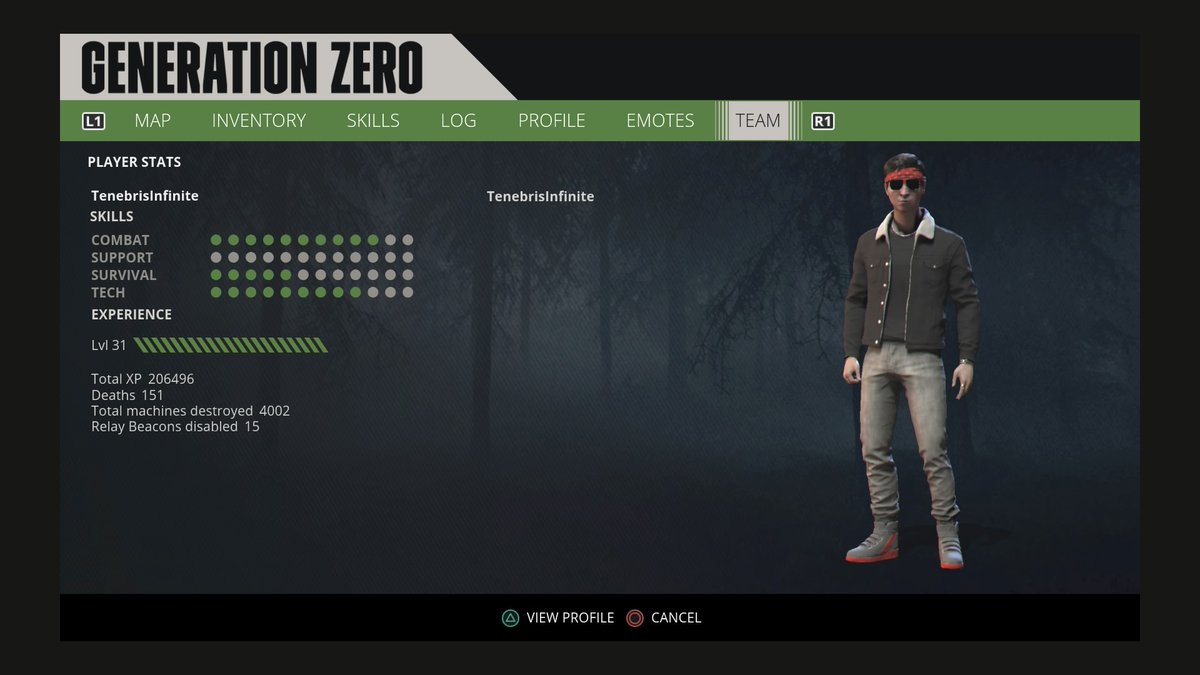 That would be good feed back

I mean realistically your KD Ratio is already there, you just have to do some minor math, 4002/151 = the ratio, in your case 26.5 machine kills per death (rounded to 2dp) . Even though it would be nice to see, I feel like as a whole, a KDA Ratio and especially a KD ratio are designed more towards a PvP enviroment and not a PvE enviroment as its usually easier to outwit an AI than a human.

Also some peoples playstyles will change that KD dramatically and wouldn’t really represent their skill wholly, People who sit at a distance picking off their opponents are much more likely to survive and not die rather than someone who likes too get up close and personal with a shotgun or blow the machines sky high.

Opinion in general /TLDR: I don’t think it would fit that well into Gen zero being a PvE game and not PvP based and it wouldn’t represent skill properly, I’m not saying it shouldn’t be added but I don’t think it needs to be added by any means.

I’m currently sitting at 666 machines destroyed when I noticed the game keeps track of them last night lol, 43 deaths I think. So 15.48KD, but this game doesn’t seem like a KD ratio holds any sort of significance.

Not sure about K/D but I took screenshots of my stats. 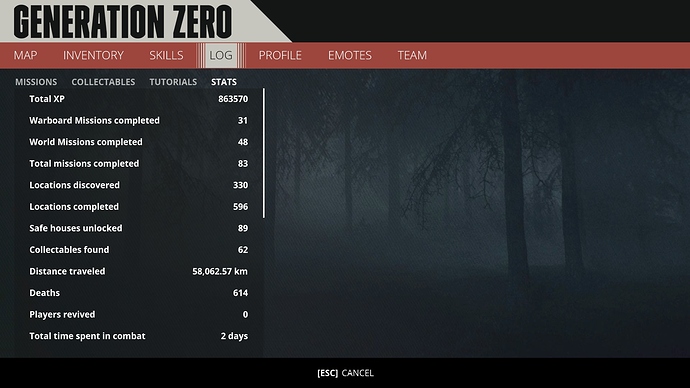 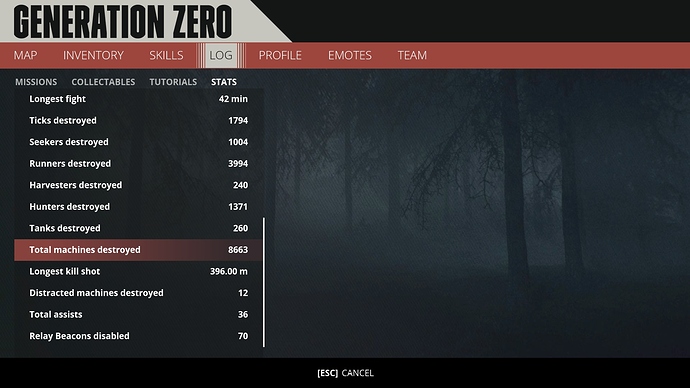 and i think you guys misinterpreted my idea… but @Zesiir got it! Im not saying the game needs a k/d calculator in game haha this is just a fun community post on here where we can post up how many times we’ve been killed vs how many robots weve killed. i know play styles will change dramatically, but thats even more so why it’d be a fun post on here. someone stealthy would have a very low death count and maybe lower kill count, where as me and xezr here are more action focused because of our higher deaths and kills.

Oh I’m very stealth focused, I reckon most of my kills are from ambushes and setting traps

Scientific experiments i died from have added to the kd ratio , lol , will post them later when on game 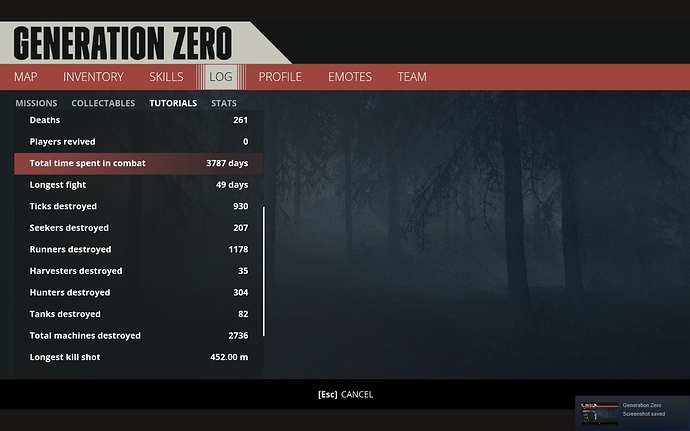 As I will -AGAIN- start over…

How the hell did you fight for 49 DAYS?! Must’ve been an epic battle.

That must have been a hell of a party, because I can’t remember that 49-day fight

Currently at 43 deaths and 523 robots destroyed. I prefer to engage in combat only when necessary and I try to stealth past robots.

So basically, 67.7 KD ratio.
I just wonder how many deaths have been for trying to launch myself to another islands or just dropping into water/death when trying to get some crazy places… a LOT I would guess. 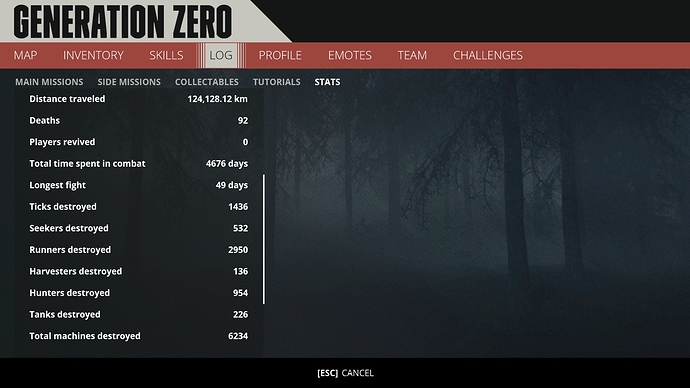 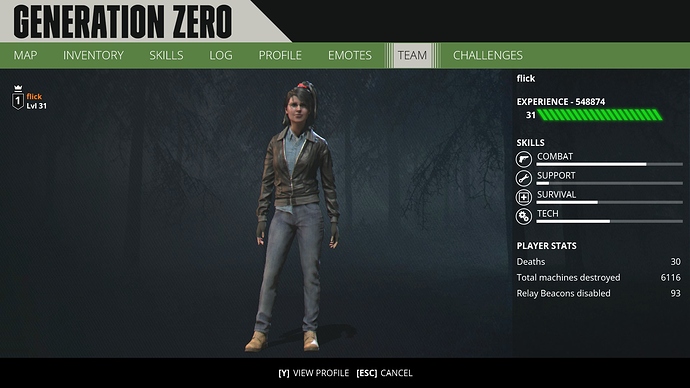 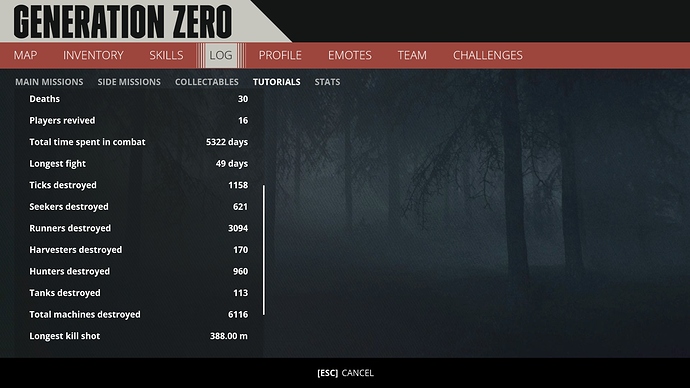 I think it works out as 197 203. I used to be careful, now I’m doing bits of co-op with someone who likes throwing surprise parties…

Edit: I think we’ve all been in combat for 49 days.
Edit the second: Just updating it because I hit 200 and I’m reasonably pleased at the round number.

PS: I am ashamed of my KD, I can tell you that much.

How the hell did you fight for 49 DAYS?! Must’ve been an epic battle. 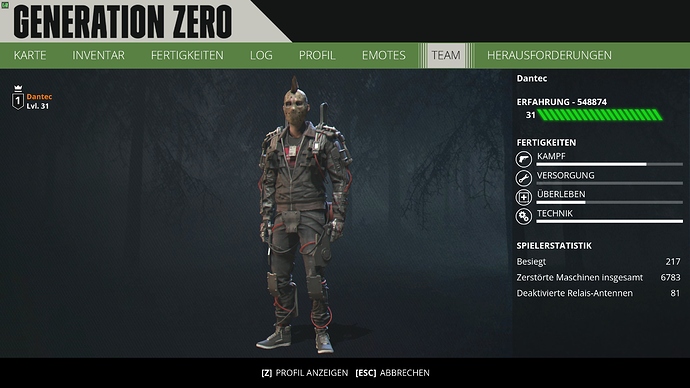 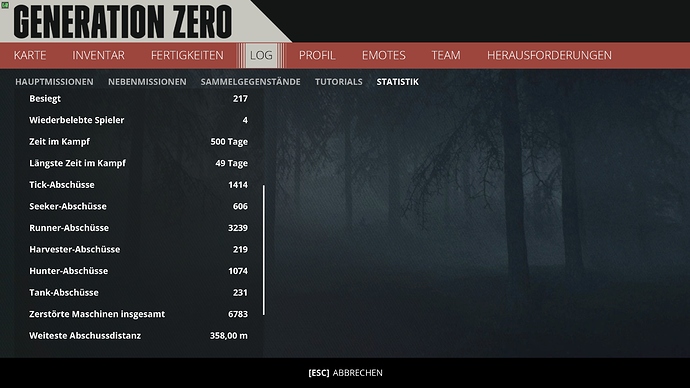 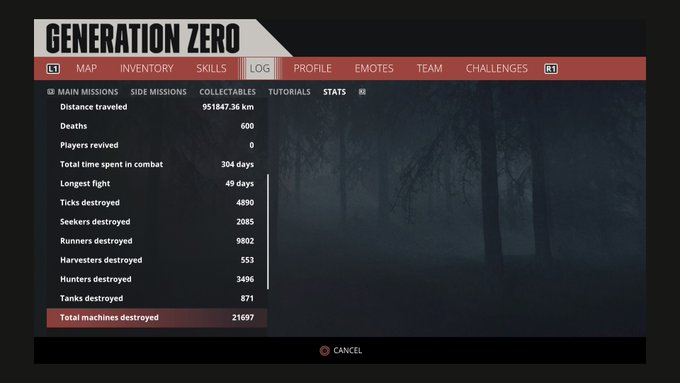 500 ish deaths later and about 16,000 more machines killed in the process! Thing i’m proudest of though is that i’m getting close to a million kilometers traveled in this game.
safe to say ya boi’s got legs.