Right then, I think I’ve found a bug, but I don’t know if it’ll repeat. I’ll repost below if it doesn’t reoccur when I try it again.

Defend the hotel: I’ve gone through 24 waves of enemies now, and I’m not sure that can be right. Each time the last machine or two disappeared (though not the last time) and I was back to talking to the girl on wheels. Same conversation three times and then the waves started again. It can’t be time-limited, can it? You have to destroy the last wave in a set time or you’ve failed and have to do it again? That’s not like you lot, and quite rightly, so I think it’s a bug.

I’ll go back and check when I’ve recovered (wow I was pee’d off after the 24th wave, not to say wicked short on ammo).

I’m on PC, just below minimum spec (according to @Voodoo, who knows about these things).

Hi Fod. Welcome to the gang. Ah, so it’s not just me - the last two times I didn’t even get to speak to the girl - it just reset the timer before the first wave. I’m single player too.

I’ve sent this along the tubes. Weekend’s coming up but I felt it deserved some attention nonetheless, being a main mission and all. Hope things work out.

Would you be up for providing us with your save file to help us with the investigation of this issue?

Send me a DM here on the forum if you are up for it.

Our investigation continues regardless, but an affected save file would help us a lot in our efforts to identify and fix the issue

Yes absolutely. But after the 16th wave I crashed, so what was saved I don’t yet know - I was too dispirited to start again and it was 5 in the morning! I can attach a file to a DM, can I?

You can make a winrar/zip archive, put the save file inside and send it to their mail, which can be given via the private message.

It’s okay, we worked it out, and they’ve got it. I hope it tells something useful, since it ends with a crash!

In my log it has talk to Anita checked off…… but not the defend the hotel when I go back to the wine celler. This just keeps repeating.

Is there any more info on this repeating mission problem?

Thus far we have been unable to reproduce the issue in-house, with and without the provided save file (from Bootie).

The investigation continues and some additional information could prove helpful in our efforts to identify and fix the issue.

IF affected by this issue, please consider going through the questions and checklist below and describing how it behaves/misbehaves for you.

Here is a checklist of how the mission SHOULD function:

Also, if anyone could record and share a video of the issue and how the mission behaves that could be quite helpful and much appreciated!

Thanks for the help, sorry for the inconvenience, and thank you for your patience!

Did not pay attention to the timer to start with. Loading out of storage box when Message Hotel Destroyed came up. So first of that mission failed and then it just repeats even though I kill all robots.

Okay, might be able to get in here - For me the first wave comes to the Front Door 1/4 and consists of dogs, as does the second 2/4, but with a lone Hunter. The Third wave comes to the side 3/4, as does the fourth 4/4, and then we are back to the front door at 0/4 and it repeats the same pattern. Sometimes there are a few seconds between them, on a count-down, but then they just turn up. I am always at the side entrance when I am told to go (again) to talk to Anita.

I am on single player PC

Have completed all base missions, and never stopped at all, and saw nothing to say that Hotel had been destroyed - every time I looked at the Hotel Health bar it was two thirds, and once down to a third.

Went back and went through the waves of attacks again and killed all. When over I got the message to talk to Anita again. Went out to loot dead robots first and there were only a few. I would say 3/4 of downed robots were gone.

Thanks for the additional information, guys!

We have still not been able to reproduce the issue in-house.

Also, I’m wondering if you have seen other players complete the mission (The Resistance) on youtube, streams or videos? It would be of interest to compare your experience with footage like that and point out at what phase/point/manner the mission misbehaves for you guys and does not work as it should.

For an overview, this is how the log should look when the mission has been completed, with the very last objective being “Talk To Elsa”. 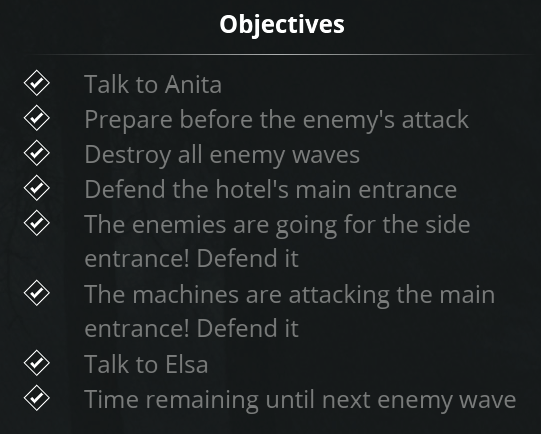 I have another problem with this mission, when the last wave 12/12 attack and I take damage (not deadly) the game crashes. Happened twice in a row and I have lost a considerable amount of ammo due to this because I have to start all over again.
I’m on ps4 btw.

Sorry to hear that you are crashing when so close to completing mission, I understand it must be quite frustrating.

Please make a separate bug report here in the forum for the issue so that we keep it to one issue per forum thread as it helps making the investigation easier and also makes it easier for others to find your report and add to it if they are experiencing the same thing.

Sorry for the inconvenience, and thanks for reporting

So am I right in thinking that this mission resets if you don’t complete it in a certain time?
I got as far as destroying the enemies at the side entrance and then I was told to go and speak to Anita. But this just restarts the mission. Now I am out of a lot of ammo and have made no progress.