Talk about the Planes and Airports in Generation zero 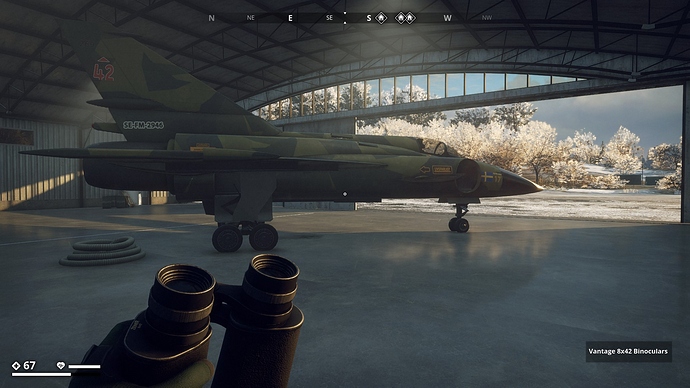 I have been wondering about the planes in the game. So far there are two types of plane that I have seen, the “Vråken strike fighter” and another type of plane I can’t identify. 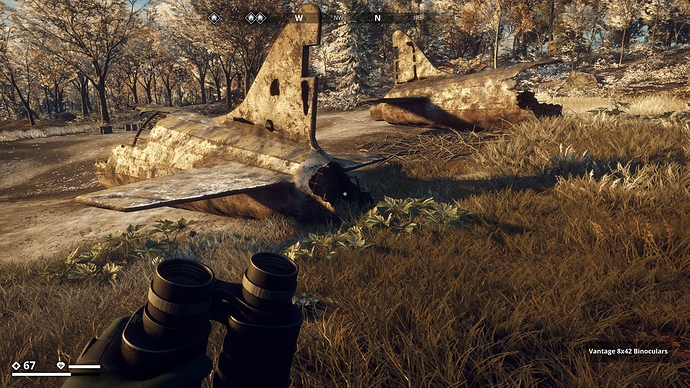 Here next to the impact crater we also find parts of the main wings. But I couldn’t find any other parts that would help identify these wrecks. 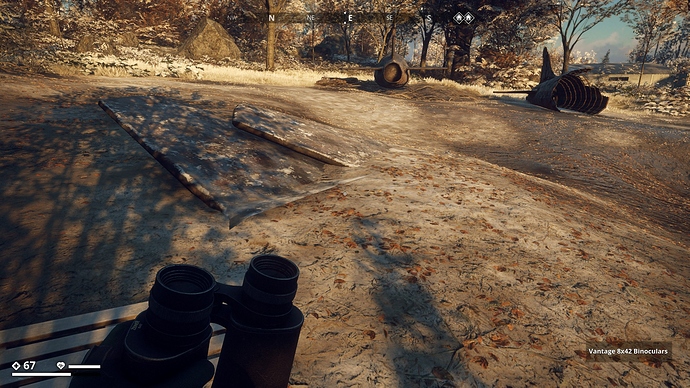 Looks like a cargo plane indeed.
And it looks like it has been lying there for many years, and not shot down by FNIX.

The two (cargo) planes were perhaps parked there and something explosive occured, leaving the crater and the two tail ends. There are probably more plane parts covered by de debris/sand from the crater. I kind of like that the game has more planes types. You would expect military cargo planes on this air base.

I wonder why only Vraken fighters were the only planes around. You would expect to see bombers, multi-role fighters and Helicopters as well. As Ostertorn is close to the Baltic possibly a Naval aircraft should around.

Those would be nice set pieces in the world to find. Btw, do you know perhaps what F23 stands for in F23 Överby Air Base? Is the Vråken a F23? I can’t find information about that. It would be interesting to know.

Furthermore there are 4 locations that are called Anl (Anläggning) where Strike Fighters are parked, and can take off from there and land back there. Two only have a airport icon, while the other two are basically the same. A bunker where the fighter can be parked and a simple road-like runway.

This has already been discussed.
The fighters are spiritual clones of the Saab 37 Viggen not the Draken.
Not 100 % copied but resembles a lot that fighter. while at the same time has some minor elements from the Saab 35 Draken, the nose is very similar.
As weapons, Planes, specially military planes need licenses too.
I too wonder, why are there no Helicopters, or other fighters…probably they did the same as with the Tanks, to spare time they created only 1 model.

I too wonder, why are there no Helicopters, or other fighters…probably they did the same as with the Tanks, to spare time they created only 1 model.

I kinda guessed that. I know the Devs were short for time on launch, I just hope with some of these revamps we will see some variation.

Do you know then what F23 stands for in F23 Överby Air Base and how?

I would say that will not be anytime soon.
And to be honest, with Soviets and possibly NATO a bit later, it will be more important to give them some vehicles representing such “factions”.

Do you know then what F23 stands for in F23 Överby Air Base and how?

No, i believe it means nothing, it´s just the number of the Base, not everything has or needs a secret.
At least in terms of Military Knowledge F23 means nothing.
There is the YF-23 fighter, the other competitor of the Raptor, it lost to Him, and that is why the U.S has Raptors and not Yf23, though they are pretty similar.
BUT it has nothing to do with that certainly…

A thought just came over me. Why is there no helipads anywhere? Fredrick Holberg would probably have flown in a military helicopter between military complexes. ( On a side note as well, has anyone ever actually seen any “artillery” at Normyra artillery base)

That is because= Lack of resources and time by the dev team.
No artillery indeed, more of a Tank brigade and administrative center, having some houses, some warehouses and some tanks, and the bunker network.

When I was looking at the tail codes and other markings on the Vråken strike fighter I found it funny when I saw the word “Livsfarligt” (Dangerous) with an arrow pointing to the back. The Saab 37 Viggen has a triangle pointing backwards with FARA (danger) in it. 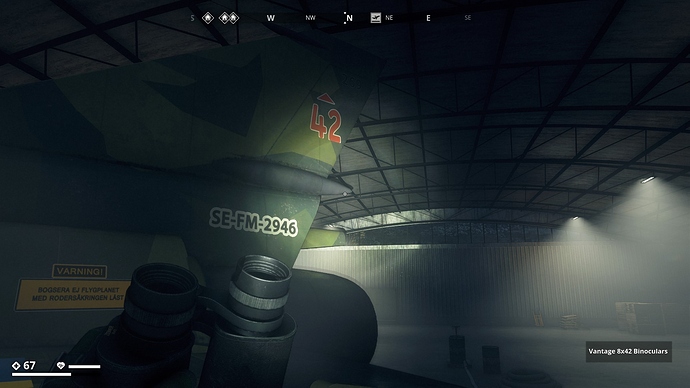 WARNING
Do not tow the aircraft with the rudder safety locked

WARNING
Do not tow the aircraft with the rudder safety locked

So the warning says: “Do not tow the aircraft with the rudder safety locked.”

What does that mean? Would towing somehow be damaging to the rudder if the safety is locked? I assume the Fighter is towed from the nose gear, nowhere near the rudder.

Probably because towing might happen near active planes. And vertical rudder locked, other jet engine wash can apply force to rudder. This might damage the system if it is locked.

F23 can be simple as, F stands for: Flygplats (Airfield)

just guessing here, but the pilot pedals often controls both rudder and the front landing gear, so its possible that the linkage is mechanical.
If so, then the rudder must be able to swivel with the front wheel to allow the plane to be safely towed (cant turn front wheel otherwize).

In the mission “Flying blind” we can listen to a radio transmission and hear Captain Lindqvist at F23 saying that before they lost control of the runway, only one single squadron of Vråken was able to take off. How many intact Vråken do you think are there still on the ground today?

Many strike fighters were never heard from again. Can you identify two Vråken Pilots from the garbled names list?

Here next to the impact crater we also find parts of the main wings. But I couldn’t find any other parts that would help identify these wrecks.

It looks like those aircraft could be inspired by the Saab 17, which in reality was in service as a recon plane between 1942 and 1955. The vertical stabilizer looks a bit different, but the horizontal stailizers, elevators and the fuselage are pretty close. The Saab 17 was a Swedish bomber-reconnaissance aircraft. The project was initiated in response to a request in 1938 from the Swedish air force for a reconnaissance aircraft that could replace the Fokker S 6. Design work began at the end of the 1930s as the L 10 by ASJA, but after the merger with Saab in 1939 it was renamed Saab 17. The wings were reinforced to make it possible for use as a dive bomber. Since there was a shortage of engines the aircraft were flown to their destination, where t...

Ah yes, I have been searching the internet, but I narrowed my search more towards the 70s - 80s era.