I’ve been seeing a lot of repetition in the Feedback and Bugreport Subforums. I think it’s great that you all are voicing your opinions and suggesting solutions to problems that you’re having, I just wanted to compile a list of things that I’ve passed on to the devs directly so far (which means they’ve probably been requested a lot!)
This is so that new users can check quickly whether their issue is already something well-known and heavily requested, so I’ll be expanding the list as I pass on new issues.

I’ve left out all the Mission Bugs on purpose since it’s official that the June update will be all about fixing those. But yeah, those are also a thing right now.

Note that me submitting those issues to the Devs does NOT necessarily mean they are going to get a higher priority in their plan or that they’re going to be implemented at all, for that matter. It simply means I’ve either seen them a lot on the different social media platforms, I deem them important, or both.

If you feel like I’ve left something important out, please comment with the link to a bug report for the problem you think should be added to the list, this thread is not a replacement for the bugreport forum
Remember to keep your feedback constructive and friendly.

I would add being unable to reliably switch between weapons, which raises it’s head at the worst times.

I think the worst occasion I stopped counting after 11 attempts to switch.

I would add in the no loot toolboxes, that’s effectively reducing our loot by 50%

Might aswell add disappearing weapons to that list considering I just lost a sniper rifle with two blue attachments (4x8 sniper scope Rare& light enhancer (NVG mod) also rare) and one green attachment (worn suppressor attachment) and 54 softpoint rounds the rifle itself was a semi auto bolt action rifle, it was with me since the start of my playthrough and is something I depend on having but for some reason when I was switching guns in my inventory UI my rifle and it’s attachments and it’s ammo disappeared and now I am majorly angry because of this it happened 12:25 UK timezone Monday 3rd June 2018

Hi and thanks for this detailed report! can you test something for me? Next time you pick up a sniper attachment, right click it and select “attach to weapon”. Does the wepon you lost still appear in that list? If it does, then this is the so-called “Phantom Weapon” bug and the devs are aware of it. if not, please submit a separate bugreport in the according subforum

Thanks for your help in improving GZ!

I’ll see what I can do there wasn’t a phantom outline when I lost the weapon all I can think to myself is, how am I supposed to sneak around post apocalyptic (machine infested) Sweden without my sniper rifle I mean I have the other varient Älgstudsare on me but I don’t have any .270 bullets as I find them impossible to find where as the .243 was easy to come across this has really put a strain on my continuation of my playthrough right now I’m not one of these gun-ho players that just charge into situations without doing recon first that rifle was my lifeline

One other thing I noticed aswell was that the loot from fallen enemies such as the harvester and tank class enemies would disappear for no apparent reason this happened yesterday around 9:47pm I donno what causes that to happen but the Devs should look into that aswell I was about to loot the hardware from both classes and for no apparent reason the yellow outline wasn’t showing when I approached the wreckages other players got their gear from the wreckages but I didn’t get anything after wasting a ton of 7.62mm full metal jacket ammunition to bring both targets down in the F23 Ôverby Air Base 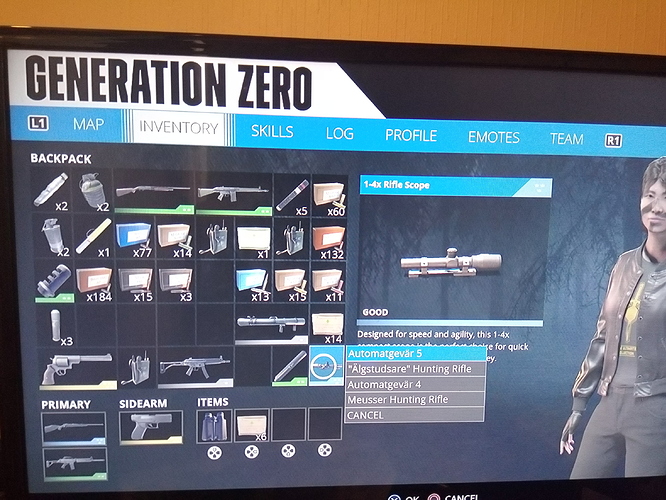 Ah okay! Yeah, one of the other Beta testers had that glitch as well, devs are investigating it

For further bug reports, please use the appropriate subforum

it’s in the forum I created for the glitches and bugs for review, someone’s gotta keep an eye out for these for the dev team lol seems I’m finding quite a few bugs

but I’ll bare with it cause I really like this game and I’m eager to see where it goes, lol one thing I wish we had though…storage boxes

but that’s for the future updates I’d imagine lol

Great! Thanks for sticking with us, it means a lot to the devs <3 Storage boxes have been “leaked” as in if you go to your Log, then “Tutorials” and scroll all the way down, there’s a section about Storage boxes, so it’s confirmed for a future update

Heh can’t wait till those are added, the storage capacity for player inventory can get tight sometimes lol especially when you have to take in consideration of ammunition needed, medical supplies, adrenaline supplies, distration and trap supplies, my favourite so far X2 gas canisters and one boombox

Here’s a video of the ammo disappearing bug.

I was in a session with another player (my save game, they joined me) and we had been attacking various enemies for a while, using fast travel to get to places. You can see when I switch to the Automatgevär that is has very little ammo left, that’s because all it’s ammo had already disappeared and I was only left with what was in the gun, but I didn’t get video of when that happened. So I add the Granatgevär to position one and continue, when the Automatgevär runs out of ammo, it seems at about that time all my ammo for the Granatgevär also disappears.

The fact there was another player isn’t too relevant, I’ve had ammo disappear in single player sessions as well, here’s a single player session where you see my rocket ammo go from 3 to zero, but I don’t have a shot of the inventory screen for this, you have to watch the ammo counter.

Wow, that is very detailed! Thanks, I’m sure it’ll help a lot!

Swapping weapons sometimes takes way too long. It doesn’t seem to realize that a key for swapping was pressed.

Regarding this topic i can add what I found out.
If you stop looking through the scope of a weapon there is a certain amount of time where you cant switch weapons. This time is longer then the animation of taking the gun away from your eye. So when you press the key for another weapon while this time span the command will simply get ignored.
Oh and another thing is that you can switch weapons and during the animation you can press the key for another weapon. The animation will switch to your last ordered weapon/item. I dont know whether this is a bug or a feature but in my opinion this doesn’t have to be changed. We can say its a feature

I’d like to see a merger between the two different 9mm types. The m/40 pistol isn’t represented in-game, thus this makes zero sense.

Carniv0re i absalootly love the bugs youve put forward.Ive got a feeling you dont like them bugs either lol.If they make what youve put forward priority and it works meaning no counter-acting crash or bug.Im sure most of the community would crack a smile.I love it.