Thank you for doing this, @Carniv0re. Hopefully we can see some of those changes implemented soon.

Uttern bunker bug is important. The game is unbeatable because of this Uttern Bunker still bugged!

Some day 1 most annoying bugs rite there.Just the frame rate now a few odd missions for others and id say i could live with that.

This right here is what I would like to see happen more often. Most of us as a community feel like our concerns are being somewhat overlooked. It’s nice to know this is no longer the case and that the mods are indeed passing along this info to the devs. This is a step in the right direction as communication is key. It would still be nice if the devs were a little bit more open about what specifically they are working on fix wise but apart from that, it’s great to see that our concerns and issues are now being clearly acknowledged. Thank you

Thanks for your kind words! Kimchi is going to write an update for the “Known issues” post at Known Issues [May Update] soon! Might be worth bookmarking it

@ everyone, I’ve gotten replies! I’ve updated the post with the response I got from the devs. Hope that gives you some insight! Remember that fixing the Quests will still have priority in the June update and it’s entirely up to the devs what they end up implementing and what not.
Cheers!

I’ve noticed another issue with the grenades aswell, when trying to quick throw a grenade it sticks to the player instead of being sent out as a deployable projectile this causes the players to receive the full damage of the grenades explosion (which can result in the loss of 50-60% HP damage) I would suggest looking into this glitch sometime but it isn’t a major glitch more of a minor one, also noted that the other fragmentation variation doesn’t work at all (the golden holy frag grenade with the Catholic cross ontop of it) I threw one at a tank and there was no explosion at all

Well that sticky grenade one is also a bug I’ve never heard about before. Have you reported it in the bugforum? Also, I’m not sure whether the holy hand grenade is supposed to work. It’s an easter egg, after all

Also when exactly can we expect to receive our storage chests? Also I think the reason why the tool boxes don’t have any loot is because they are meant to hold crafting materials this could explain why there are so many empty tool boxes spread throughout the world, might want to ask the Devs if this could be the case

Lol an Easter egg grenade? Whaaat lol that’s kinda dope and I threw one at a tank XD hahaha

There hasn’t been an official statement on storage chests, all they said is that they would like to do it at some point. Even if I was to ask them about crafting materials, I wouldn’t be allowed to tell you what they reply

Lmao ok…wasn’t asking for a reply from the Dev team but as I said it could explain why there are alot of empty tool box storage units around the map lol, on the side note there are a few weapon types that aren’t covered in the game yet probably future update plans but we have yet to see a grenade launcher and a light machine gun variation lol something like the RPK lmg or a six tube grenade launcher lol seeing something like that in the game would be nice it would kinda bring an equilibrium when facing a harvester or a tank, just a suggestion

I am really SATISFIED the Devs have acknowledged the AMMO VANISHING bug. I have just LOST two big slots of smg 9MM while bravely fighting my first (green) tank. I was so impressed by @Xezr video and tried to imitate him.
(Finally I killed the tank using all my 7.62, buckshots, medkits and adrenaline.)

NB. I observed that after the ammo vanishing my Kpist smg had two attached compensators : one real and the second, labelled compensator as well, replaced the ammo tab. I was not able to get rid of this phantom attachment for a moment and I had to drop the weapon and pick it up in order to fix the attachments tabs. Maybe this information could be passed to the Devs and be usefull.

Are the devs aware of the bug with the ‘Fashionista’ Trophy on PS4? Many players have met the requirements but it won’t unlock. I have played since day one of release and have acquired at least +200 items of clothing but the trophy still hasn’t popped. Is this something that has been passed on for future consideration? 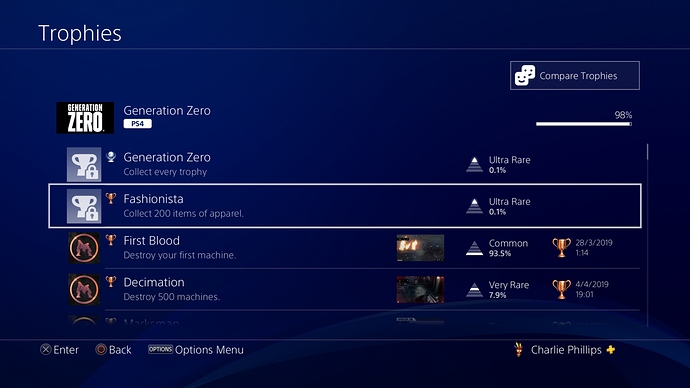 Yesterday after destroying 3 tanks, one harvester and about 10 runners by the windmills I started looting the big guys - 2 tanks - OK, harvester - OK, third tank - can’t loot… even boxes/backpacks.

That bug is not fun. You spend a lot of ammo and probably med packs. And when it’s time to grab the spoils of war someone gives you the finger and leave you empty handed. Happened a few times for me. Especially on and around the airfield.