been trying to find any gun in the us weapon pack better then 3c for a few days at this point and only got a few n9 mags. not to forget to meantion i accidently gave my 3c versiosn to someone without the dlc and it went pop, and gone so i bought a dlc and cant even find other versions. maybe up the rate of them dropping by a little bit?

All weapons have RNG when looted from the machines. Just keep it up and you’ll eventually find one.

Or you are grinding for month and get nothing. I think during the last month only one machine droped weapons in my game and that was the reaper. I dont have the US pack but I assume it is the same random drop rate like for other weapons. I personally think that this random system isnt that great. To reduce the frustration I think a 0 drop should increase the drop rate of the next machine slightly. And the weapons you already have should have a lower chance to drop.

I personally think that this random system isnt that great. To reduce the frustration I think a 0 drop should increase the drop rate of the next machine slightly. And the weapons you already have should have a lower chance to drop.

I’m indifferent about it. Though, there was talk about “bad luck protection system” last year but if it is implemented - i have no idea.
Dev stream as well where it was discussed, at 00:52:28,
link: https://www.twitch.tv/videos/550826095?filter=archives&sort=time

Now that’s a great find on a prototype Hunter

I’m in the same situation. I destroyed hundreds of FNIX and Military machines and the only improvement I got was a 5* N9 extended mag. It’s the same with experimental weapons, 5* weapons and 5* LMGs. I really don’t think that this “bad luck protection system” is implemented. I’m gonna keep grinding though.

Himfjall in general - head to the usual hotspots, rinse and repeat.

I’ve had half a dozen N9s and I’ve lost count of the number of N9 extended magazines from Hunters. However I’ve yet to even see a hint of an N16 or N60 (or attachments) despite killing hundreds of Tanks & Harvesters of all classes.

Happy to go hunting if you need a wingman, could do with a few 5* attachments as well

I too have found so far a 4* N9 and recently a 5* N9 and a couple of magazins. the AR and MG have proven to be extremly elusive so far which is kinda sad. Even 1* weapons or attachments are nowhere to be seen.

My friends just bought the dlc today and got several n9s and n16 5c today. This is bs. They need to fix this I paid money and didn’t get nothing.

I paid money and didn’t get nothing.

Sure you did. Check your Plundra.

when i gave them to some1 w/o the dlcs

Devs have acknowledged that the current system regarding new weapons doesn’t work as it’s supposed to and we might see a change to it in the future.

But i think the game shouldn’t let it’s payed content to be given to others, non-DLC owners, for nothing.

If another player who does not own the U.S. Weapons Pack DLC picks up one of the weapons dropped by someone who owns the DLC, the weapon will disappear for both players

After some experiments, there is indeed something wrong.

The N9 weapon and attachments are not that hard to find.
On the other hand, finding N16 and N60 weapons and attachments is a pain.
in some days i destroyed more than 100 hunters that were Fnix and APOC class and only some had N9 items, nothing else from the DLC.
At least 30 Harvesters and nothing, more than 50 Tanks, most of them Fnix and APOC (to improve my chances) and nothing.
I believe the N16 and N60 drop probability are as low as the KVM59 is, or maybe even lower.

However I’ve yet to even see a hint of an N16 or N60 (or attachments) despite killing hundreds of Tanks & Harvesters of all classes.

On the other hand, finding N16 and N60 weapons and attachments is a pain.

Since the December '20 update and after weapons DLC came, from the 2nd Apo harv i took down (and 2nd harv overall), i got this: 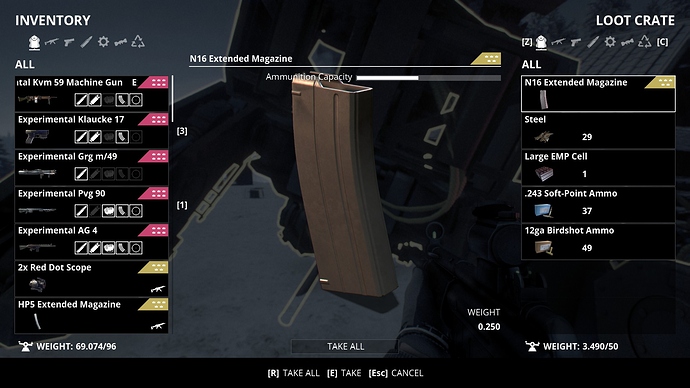 I can’t say that RNG would be bad.

Then again, i play only on Guerilla difficulty (solo game) and that may have an impact on the USA weapon/attachments drop rate.

Well then you are the exception and lucky one.

Playing mostly in Skirmish and yesterday on Guerrila

Approximately in the last week i destroyed:

Results: not a single thing about the N60 and N16 was obtained from a machine loot or any container on the entire Map.
I did get many N9 capacity mags and some N9´s from hunters.
Most people are having the same drop type I am having and claimed they took down even more machines having no luck. (at least on Discord).
So most people can say that the RNG in regard to the DLC weapons is pretty unbalanced yes.

A good soul did give me the 5* N60, so not everything is bad though

I will do the same for someone else, when in 3 months i finally get the N60.

I have all these weapons, but they’re from fixed drops or other players.

…and of course, no US weapons yet.