Guys, that discussion would merit it’s own topic.

So I saw a good thing going on in this thread and do agree that it can be a pain and a grind to get the Reaper spawning balancing your Rivals. Sure it is Endgame content, but at the same time, I am sure everyone got the loot they wanted by now,…

Anyway what changes can we brew up for it to spawn without effecting our Rivals. (maybe small % chance to appear instead of a Rival?)

Also loot,… once the bug is fixed, maybe add clothing schematics as they are already rare so we have another reason to go after them.

I think Rival kills should count towards spawning the Reaper instead of against it. It just makes sense that by killing the biggest, baddest machine, we provoke an even bigger, badder machine to go after us.
Also it’s a pain to evade all the areas a rival is in when farming, since those are usually the areas with the most machines.

It does suck to have to level an area, keep your Rivals in check and manage score just to spawn a Reaper, when more destruction should be the way to go!

My only issue is that Reaper counts as one of the Rivals.

I have several regions with 8 rivals and at lvl20, with 9611 score, having a good start to spawn a Reaper. If it wouldn’t count as one of Rivals, which it does.

I’m not going to kill off my rivals, that i had hard time getting (only tanks, all lvl4).

Due to that, i’m currently leveling up Himfjäll, from basically 0 region score (since i killed few rivals there just before November '20 update) and i haven’t seen a Reaper in my game so far.

I think Rival kills should count towards spawning the Reaper instead of against it.

This. I’m certain this will be changed in the next patch, since currently the spawning of the reaper is against all logic and common sense.

Well, devs envisioned Reaper to be end-game boss, and it only spawns when region level is 21 or above (about 13000 region score and more). Like a “super rival” to say so.

Though, only issue with this, is the current rival system, which will spawn rivals as low as 200 region score (in Guerilla difficulty) and by the time you get about 2000 region score, you can have all 8 rivals per region. And if one wants to spawn a Reaper, one has to avoid rivals, which gives this silly situation.

For a change in Reaper spawn, i’ll expand Carni’s idea;

One option could be where Reaper spawns after you’ve killed 40 levels worth of rivals. And Reaper spawns in that region where you killed the last rival that amounted the net of 40 or over it.

That would mean, that you’d need to kill:

(40 is just my example. It could be higher or lower, depending how difficult devs want the Reaper spawn to be.)

This would fix the issue of Reapers spawning just one after another and also gives sense of killing rivals = Reaper. Especially since killing higher level rivals means that Reaper will spawn much faster.

Anybody with input on the loot pool?

on the loot pool?

Well, Reaper does have some unique drops, no other machine has. These include:

The rest of the loot pool (as far as i’ve seen in the forums), is from the regular rival (other experimental weapons) + from regular tank (ammo and the like).

It is completely counter intuitive that the Baddiest rival spawns only after the area is saturated with rivals. It would make way more sense that your region level would be high if you had cleared out everything and it decreased as robots and rivals spawned /travelled into the area. You would be hunting trying to find all the robots in the region trying to keep your score high to have a chance to spawn the reaper. Right now robots are worth points when you kill them. Just have that amount used to deduct from say 20000 and every day you have a % chance to spawn the reaper affected by how high your score is or in other words how clear of bots you have kept that region, The more you kill bots the more chance of rivals why this does not apply to the reaper is mind boggling.
Maybe this a should be moved to feed back by a Mod

it would be nice were it not duplicative stuff…

It is already there.

There isn’t that much of unique stuff in the game to make Reaper to have only unique drops. Though, in the future, when devs add new items to the game, then maybe.

I have several regions with 8 rivals

Wait, if you already have 8 wouldn’t it mean that you have to kill one of the rivals so the Reaper can spawn?

Wait, if you already have 8 wouldn’t it mean that you have to kill one of the rivals so the Reaper can spawn?

In that particular region, yes. And that is what i don’t like about it. Reaper shouldn’t count as one of the Rivals since it’s meant to be end-game boss and you can only spawn one active Reaper in your game.

I have Farmlands, South Coast, Mountains and Marshlands, all filled with 8 rivals per region and all are level 4 tanks. I’m not going to kill any of my tanks, just to spawn a Reaper.

Okay, then I’m with you.

I agree with that killing the rivals should count towards the spawning ritual. I recently just closed the game for tonight/morning, I have 7 rivals in the Farmlands and are on region level 21. So I am nearly there.

The issue with Reaper being rival is, that when you have 8 rivals in the region and you kill one, it drops the region score. Depending on a rival type, class and level, that drop could be huge. Well enough to drop your region score below the minimum score of Reaper spawning in.

I got a tip if that happens; kill the lowest/weakest rival (Prototype-classes).

If I do not beat the Reaper, maybe I can ask it if it would like to play a game of chess

I got a tip if that happens; kill the lowest/weakest rival (Prototype-classes).

That tip is useful only in Archipelago and Farmlands since only in those two regions, proto machines spawn. Everywhere else - and you’re out of luck pretty much.

If I do not beat the Reaper

If you do not, then look here: Reaper Tips and Advice

I decided to get a Reaper to spawn on Himfjäll as well. For some reason I don’t know, I thought 6 rivals was max on Himfjäll, and I kept on killing my 6’th rival over and over again cause I thought I was making room for The Reaper!

Here’s how my score looked when The Reaper finally appeared: 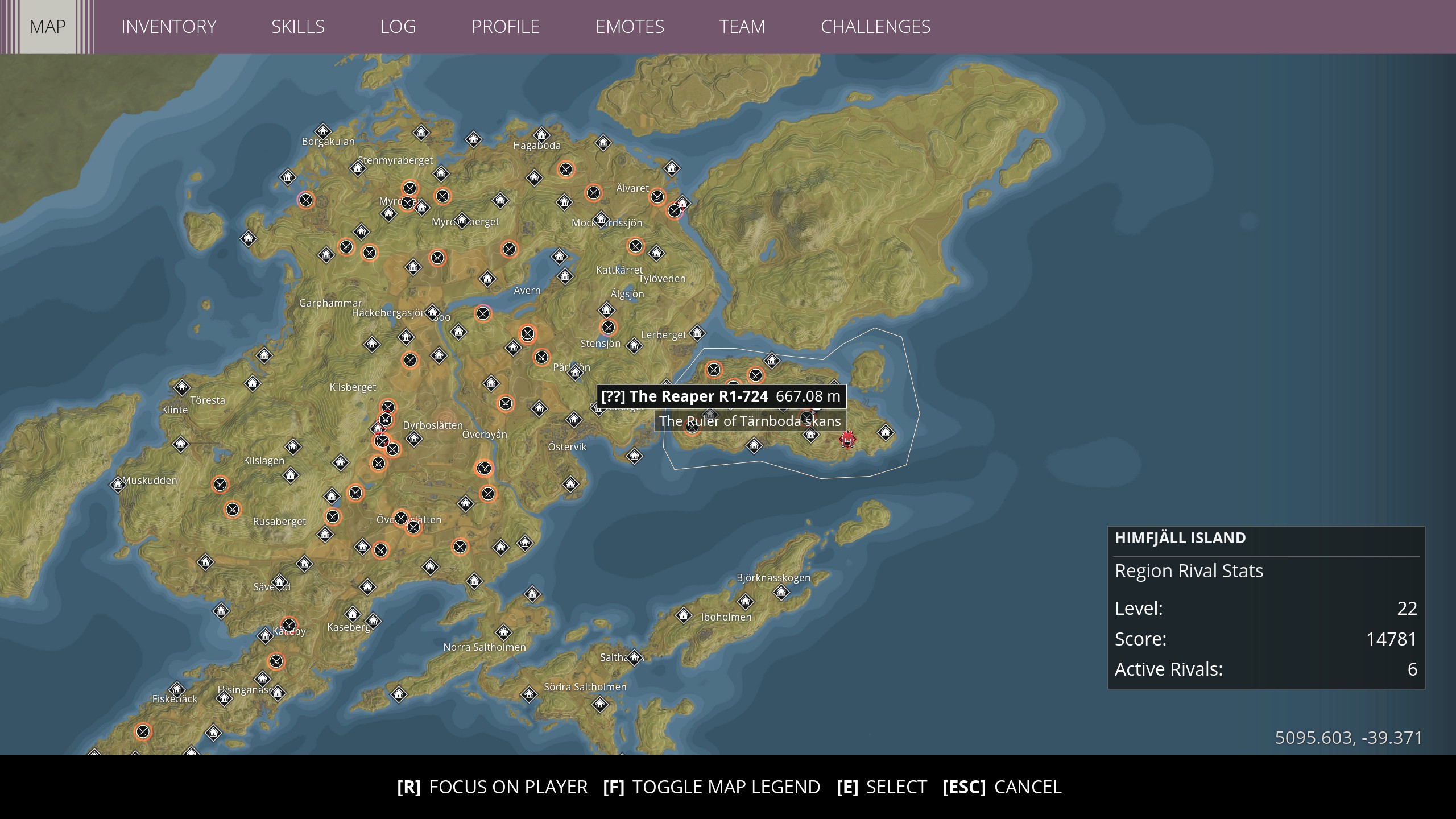