So far war against machines, killed tons of harvester, tanks. Normal and Rivals.
I seem to get schematics from high end, purple ones. Rarely seen blue or green which i need to upgrade stats.
Are the drop depending player character level?

And is there a system in place which prevents you don’t get the same schematic again?
Four groups of clothing, 4x3 = 12 schematics. 16 if there is 5 stars, never seen one. (not counting 1* star because them you already have all).
Chance to get same ones is really high after you get couple of them, which would be ridiculous. And missing the low ones really makes crafting clothing buff’s impossible.

And current still buggy Rival hunters loot table not giving anything. So you are screwed if you get Rival spawn as Hunter.

You know, all 1* and 2* schematics can be found in fixed locations around the map…
Here, @Aesyle has found and mapped all of them for us!

3*, 4* and 5* schematics are dropped from machines. Not sure if it’s just from rivals, or also other top tier machines. These drops are rare. I’ve only found two 3* schem’s so far.

As said above, 1* and 2* schems have fixed spawn locations.

3*, 4* and 5* schems drop from rivals and from any type or class of the machine, regardless the player char lvl. (This gives less than lvl25 players another reason to kill rivals, besides getting experimental clothing.)

Schem drop rate is RNG based, just like experimental clothing and experimental weapons (for latter, your char lvl needs to be 25 or more).
For example, in this topic, someone has found several 3*, 4* and one 5* schem,
link: Schematics - Lets talk about it

With 23x schems per tier, that leaves in total of 69x schems to be found from rivals. It would take quite a bit of time before you start seeing duplicate schems, IF duplicate schems is even a thing (latter is currently unknown).

You know, all 1* and 2* schematics can be found in fixed locations around the map…

This i did not know. I dont collect collectables, weapons etc. I consider it waste of the time, im not playing the game for hide and seek. And my experience of placement of these collectables and other stuff is extremely bad in games. I pick up those items i randomly encounter. Also explains why i haven’t got them.

Just recently after over 500+ hours in game, i was still missing two machines blueprints, this is only time in this game looked up guide and went to get them. So i can see tech info on machines.

Need to check that location guide, if it is complete and pickup those schematic. Rest is in the hands of RNG.

I would suggest someone take ownership of this, and start collaborating drops of schematics with machine types against what schematic level is dropped.

I’ll then add my findings once all 256 rivals have been dealt with along with 3 other players drop rate. With over 100 schematics now - refining the drop will be beneficial for all the completionists out there.

I just finished clearing my map of 64 lvl 4 rivals and of that I got 15 schematics (new ones are marked green).

There is no machine class or type correlation with schematic quality. For example the first one (5

blast resistant shirt) was from a prototype hunter.

There are no duplicates.

It must be high in this time of the year but this drop is just because of the pandemic i guess.

I have never had a apparel schematic drop from the reaper. I saw earlier in the post that it could drop. Can anyone verify that ?
Also PS4 multiplay we killed 9 or 10 rivals (level 4) and only one of us had 1 schematic drop. I was the host and had nothing drop, bad luck ?

Because the schematics are not so good ordered in-game, I made myself a sheet… 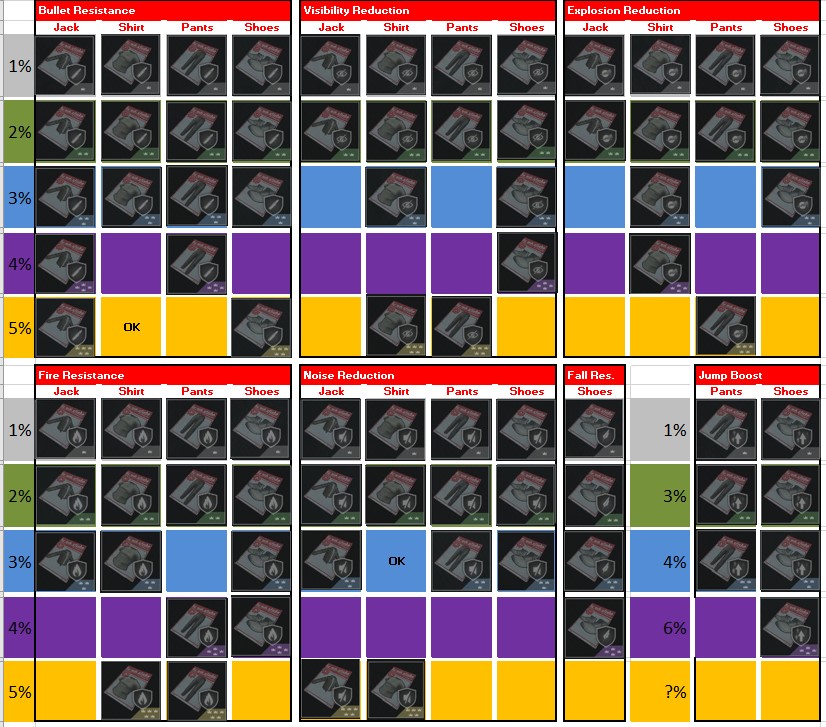 They could just do that in the game, please

I have not had a clothing schematic drop since before the last update.

I am playing on my main Xbox GT, that had the save file glitch.

Is anyone that had the save file glitch on Xbox, got schematics from Rivals since the last update?

Ps. I don’t have the Archipelago World collectible. Is this a bug?

Yes I can confirm that on Xbox, I have received 3c, 4c, and 5c schematics from Rivals post December update

I don’t have the Archipelago World collectible. Is this a bug?

It’s Kallivacken - known issue. It’s in the middle red container with the numbers on it for reference, despite is saying 0/1 - your log should have tracked it if you obtained it prior to update.

I think @QuantumHandsome is talking about the world map collectible, rather than proto Runner blueprint found in that red sea can.

If former is true, topic about it here: The Archipelago world collectable unobtainable after game reset + i linked the exact reply that describes where it is located.

Have you got them since the US Weapons Update?

I have not had any drop since I bought the DLC.

I am testing on my alt accounts and I am also getting no schematics.

I could be getting rediculous RNG.

Edit - just tested on another Alt and a Schematic dropped. So rediculous RNG it is.

I reset my game so no Archipelago World collectable exists for me.

so no Archipelago World collectable exists for me.

With this issue, there’s one thing that boggles my mind.

When you 1st start the game, game literally tells you to pick it up after you’ve picked up the initial Möller. And once you got the binos, next step is to use binos to look at cop car.
So, it is impossible to miss, unless you skip the initial tutorial mission (which in turn, doesn’t open any following main missions either).

Only way, that i can think of, on how you could skip this collectable, is when you start your game immediately in MP as a Client, without any solo play beforehand. Since when you do, this issue happens: Co-Op to Single Player Collectibles

Either this does not occur if you reset your game or picking the item up does not register in a reset game.

It seems like a bug to me. Because if it wasn’t, the collectable would still be available for collection.