With June '20 update, a new set of 5 challenges were added to the base game. Created this topic to help out anyone who might struggle with Numbing Expert challenge.

In Numbing Expert challenge you need to disable certain class and amount of machines with EMP, excluding ticks, with following requirements:

This challenge requires quite a lot of sneaking since you need to disable machines without being detected first. At the time of writing this guide, PC players will have it easier since they have Prone to use for best sneaking (lowest detection range), while console players get Prone in July '20 update.

A weapon with a silencer helps in this challenge since when you fire unsilenced shot to blow e.g car battery, machines can hear your shot and detect you before EMP effect kicks in.

Also, if you have been made and machines start shooting at you and you run away far enough to escape combat in hopes to return to same machine(s) to EMP them again, do note that when you EMP the same machine(s) after it has detected you or fired at you, the challenge doesn’t count.

Once you’ve EMPd the machine(s) and if you stick around, they come out of EMP and start shooting at you. You don’t have to stick around to engage them, instead, you can fast travel out of there after EMP is blown.

EMPs in the game:

Tips for each tier

Tier 1 is easiest since you need to disable only 10 prototype machines, regardless if it’s seeker, runner, hunter or tank. Also, prototype machines have the worst sensors in game, making them easy to sneak upon.

Below is my gameplay of disabling prototype hunter, who happened to be a rival as well, to get Tier 1 completed:

Tier 2 is same as Tier 1 in terms of available EMPs you can use. With only difference of you now needing to disable military machines and 15 of them.

Here, i tested with EMP rockets since they give a good range and wide area of effect. For some reason, i wasn’t able to detonate EMP rockets at 100m and more distance. The rocket just passed through the machine without going off at all. It could be isolated issue (e.g only i have it) or something more serious (everyone has it). At close range (50m and less), EMP rocket does work, disabling machines and counting towards challenge if you weren’t detected beforehand.

Tier 3 will get considerably harder compared to the first two. Not only you have to disable FNIX machines and 20 of them, but you can only use battery packs.

I’ll explain what those are, where to get them and how to use them.
In the game, we have three battery packs (cells): small, medium and large; 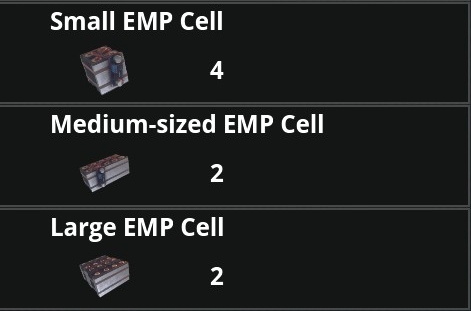 Below is my gameplay of disabling several FNIX hunters, to progress Tier 3:

With it, i got 7 FNIX machines disabled at once, considerably advancing my Tier 3.
Currently, i have Tier 3 at 10/20 and it’s still in progress.

Tier 4 is same as Tier 3 above with small difference of needing to disable only apocalypse machines and 30 of them. Again, you can use only battery packs.

Best place where to do 4th tier would be Himfjäll since it crawls with apocalypse machines but you’d need Alpine Unrest DLC for that. Without the DLC, apocalypse machines do spawn in Southern part of South Coast, NE part of North Coast, West part of Marshlands and around Marden bunker in Forest region.

Until now the greatest challenge for me is to find those machines I need. It seems that when you need them I only see military and fnix, but prototype is in hiding. I bet it’s the other way around if I need fnix machines.

but prototype is in hiding

Stick to the Archipelago region since almost all machines there are prototype.

Tier one completed . Now onto the military class.

Thanks for the video! I was searching for such info:smiley:

I’d like to comment on “power” of battery packs.
All EMP’s do not have “damage threshold” to proc - any item will disable any machine as long as EMP hit certain hitboxes. it just some items have very low blast radius. Like, you actually can disable a tank with small battery pack without emp-related skills but trow must be very precise and pack must set off very close to it’s “main cervo” hitbox - it works for me reliably if I manage to land small pack around shoulders above tank. If it set off from ground - it won’t hit any “internal” hitboxes, because blast radius is too low and here’s a risk that 'nade may bounce off out of range. Emp skill will help greatly buff the small packs into potent stun 'nades.
In short - all the difference in EMP is area of effect range and sometimes it’s time being disabled, though latter I didn’t measured or tested in depth.

I’m aware of that but since disabling a tank with small EMP takes a lot of finesse, i didn’t include these kind of complex methods in my guide.