Considering that underbarrel launcher on G3 sit on rigging that looks awfully similar to iconic square rigging for M16A2 counterpart, it might be possibility that we can have it. As of power I’d believe it would be a “hand grenade that we can accurately launch and cause component specific blunt damage and then overall explosion damage”. Oh, and we do need to buff Carl G. I dunno about EMP (seems fine and better delivery than else), but smoke dudation could be either longer of cloud could have more volume (plus blunt damage)
But how do we implement UGLs mechanically?
Far Cry 1 and STALKER has a separate button for UGLs as “main fire mode”, so does PAYDAY2 - this button also deploy bipods for MGs. One of old CoD games had it as “equipment” keys (possible implementation for GZ). Some games treat it as a separate weapon, while it is considered “gun attachment” (Cry Engine 3, it was I believe).
Special mention goes that same ol’ M203 is operable standalone (secondary slot?).
Also, for the reference 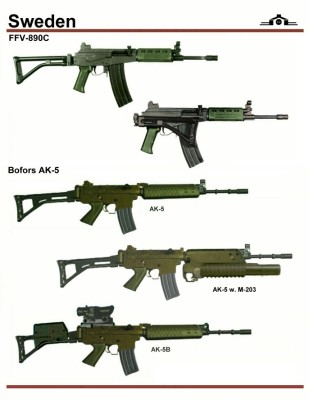 Edit: same goes for AK’s GP-25, but it only natively compatible with AK-pattern guns.

Why is it almost always americans that wants these unlorefriendly weapons and vehicles? i saw that a guy wanted a m1 abrams and a blackhawk in the game, like why, just why?

'cause those are like Strv103 or Saab Gripen to swedes. “Own and native to see”.

But a few stationary Hkp 3 would be a Nice addition. (Bell 204B for people not familiar with swedish designation).

And I agree. To many US weapons. They are in all games on the market. Better to include weapons that fit the story. Like the swedish AT4 (sure the US has it but still a swedish design), K-pist m/37 (the suomi smg),

yes and i just mean that it is boring to hear: oooh lets bring in the us and make so the m4 is in the game and a blackhawk. and yes we had the Bell 204b and that whould be cool to see

and a blackhawk in the game, like why, just why?

Are you referring to my idea in here: Let's talk about weapon packs ?

If you’d read the whole idea, then you’ll understand why i envisioned Sikorsky UH-60 (“Black Hawk”) helicopter there.

I’ve not heard anyone calling for that nonsense. A dirtbike yes a tank or helicopter no… lol

I’ve suggested a rather effective grenade launcher that existed during that time frame.

I can appreciate you wanting to keep things reasonable.

Take a look if you get the chance tell me what you think.

Sorry if some of us from a cross the pond have been a bit much.

How about something more crazy like a black powder musket

If you are looking for that sort of quirkiness I would direct you to fallout 76. (Hesitantly)

You would have better luck beating the machines with a musket than shooting them.

Please forgive me if this comes off rude or disrespectful.

That is not my intention.

i think that in this dark cold apocalypse survivors whould not chose a musket instead of a 50 cal and this is not a fantasy game, no cartoonish weapons

and like is said, this game is suppose to be dark and cold and you know mystic, but we dont need “crazy” pirate weapons

I can see the charm of getting your hands on something really special, but a musket would just be dumb. A weapon that would be difficult to find in the setting, that gives away your position, does minimum damage with poor accuracy and top everything off with a fire rate of one bullet per fiscal year.

Could not agree more.

A couple of ideas come to mind:

I would love to see a thompson rifle as well
but it would basically be useless, tommy guns aren’t known for their effectiveness.

Why tommy, when we already have local (albeit post-war) M/46, and that is have in-game “super version”? If we really want WWII-era guns, then there’s M/37 a.k.a. finnish Suomi M/31, but chambered for 9x19. But we still have slightly better M/46.

Infantry rifle? There’s not much use of modern hunting rifles. Pro’lly get 'em military-grade (custom crafted) AP ammo? Even though we get “collectible” operational guns, what odds of getting compatible ammunition? Okay, we already skipped that part with AKM, but still what pros of using antiques, when we have decent modern stuff, that for the most part allows hooking up doohickeys on 'em? Besides currently implemented hunting rifles are great “cheap” crit-shooters thanks to their SP ammo and have high ammo efficiency if you know what you do.

Pistols. 7 rounds of .45 acp or 6 rounds of .44 magnum… While there is prostpect for former to get better mag. capacity, the latter is still winner for me due to scope mount. And it’s HP ammo.
_- OR -
slightly more power than other auto-pistols (Glock, M9 and PPK), but not so much as .44 magnum.
comparing to other autopistols… sure, much caliber, such power… which isn’t that great against machines as a sidearm. Even dorky PPK is good sidearm due to fact that it can consistently pump lead full of their chips because of high hip-fire accuracy. All that on the move. G17/M9 - good balance of power and capacity.
Will M1911 compeete with all that? Sure. Will it win it’s own niche? I doubt that.

SAA. Again - antique vs. modern. .45 colt is similar to .44 magnum, but latter is improved round with better velocity stats. Not to mention monstrocity of a reloading this thing.

y because I see USA-pop guns EVERYWHERE. GZ was a small haven (before US pack) where I could taste something different.
Yes, all those “americans” have significant historical value and aestetic. But, G’de’m, they are ubiquitous up to cringe. Both “sweddish” (developed by belgian FN) machineguns (MAG and Minimi, USA-codes are M240 and M249 resp.) also adopted by US armed forces, because they couldn’t do anything to their M60 (that is, btw, based on venerable german design of FG42). USA even adopted AT4 single-shot AT rocket launcher, which of sweddish origin. Those three are forgivable.
M203 (that underslung grenade launcher) was actually adopted by Sweden (dunno when, SE army experts, please elaborate) and even hung on G3 and FNC. There was HK79 for the rifle, but wasn’t adopted.
But please, no antiques and WWII tech vs machines.

In the immortal responces mails of undying ThePirateBay words: “As you may or may not be aware, Sweden is not a state in the United States of America. Sweden is a country in northern Europe.”

Welcome Robby, I saw you suggest this in the twitch chat so thank you for getting it here.

I also agree it would be a great use for the grenades, as well as the smoke. I would welcome a battle in the dark with machines flooded with smoke rounds from a N16.

Why cant we all be lore friendly?

No more US weapons please. They exist in almost every game there is.

The British L1A1 was almost totally phased out of service in 1990. So if the brits drop weapons to the resistance it would probably be that weapon and The Sterling smg. And probably the Bren gun chambered for 7,62.
No need to drop side arms to people fighting machines.

Just took British as an example. It could be french, german och spanish. There are lots of new weapons to add that are not american and that you don’t see that often in games.

and how whould a us ww2 submachinegun get into an island in neutral sweden and there are more weapons that whould be better, like the Kpist is better than an old relic from ww2