Rivals are all over the place, outside of their region (post Nov. 2020 update)

Description: I just launched the game after latest update and noticed right away that I have rivals where they should not be. For example see screenshot below of a Rival from the Forest region at Stenmyra.

Steps To Reproduce: Check the rivals place of origin and where they are now.

Players in your game: 1

I belive this is working as intended.
Rivals have “always” been able to roam freely even though they’ve ventured further since the update.

Yes, I know, but they never travelled almost across the entire map. Usually they stayed within the region borders or close to them.

Yes it’s normal, otherwise I don’t find it funny if it remains fenced in a region

If someone from the dev team could clarify, because it was not mentioned in the patch notes.

I am not sure but all my rivals are in the wrong locations, either they randomly walked off (from the very north of Marshlands, to the very bottom of South Coast) or something in the new update broke where rivals spawn! My rivals have always been (prior to the latest “Reaper” update) in their own region, except some that are wandering a (really small) distance in to the closest region. So either they all bugged to the wrong region or they can walk on water (one rival from Himfjäll got to Farmlands) and walk really far in a quite short amount of time. So what i have seen is either they bugged and got to the wrong part of the island or they spawn in the wrong location. Has anyone noticed this too?

A report for this already exists, please search for your issues.

In my case, what was weird is that for some reason my Rivals were ejected from Archipelago and North Coast region and concentrate in Farmlands. 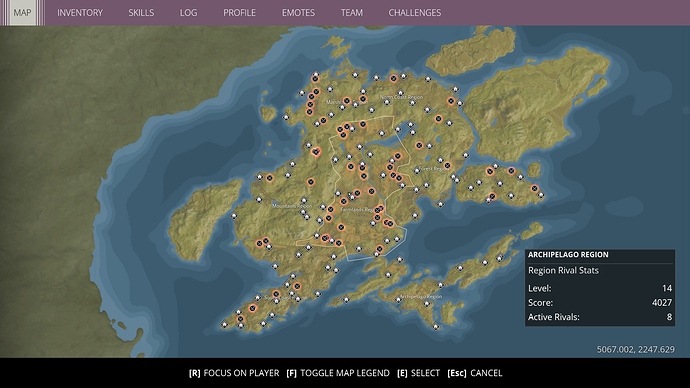 But after some playtime I noticed, that they start slowly populate region with player.

And again, after todays update - Rivals are all over the place

Notised that too, I think they have again rotated the usuall spawnpoint for the machines. For example, I had a lev 4 apoc tank rival by the relaybeacon just northeast of Ruskele(A apoctank usuallt spawned there from time to time). He moved just southwest of the airport so Ill guess that will be a good spot for apoctanks now…(edit, spelling)

Description: I have played for over 800 hours and have over 45,000 killed robots and it has made me have / had max rivals on the map. Now to the bug, I have talked to a lot of people about how many rivals you can have in one zone, and everyone is sad that you can only have 8 per zone.
4 days ago I broke that rule and had 12 rivals on Farmland only, after destroying 2 because I thought it was strange behavior of the game so I took a picture when I have 10, see picture.
How it all happened was like this: I had max rivals on the whole map without reaper. For a long time I wanted a reaper on farmland but did not think about what I had for score or level so I ran around and destroyed robots only. After playing for a few hours, I checked the map and saw that I had more than 8 rivals on Farmland. thought this was strange. And it was strange, Farmland took other rivals from other zones to farmland and who had lvl 4, did not even get a message that more rivals came to the zone they were just there. When I then checked other zones it was a chaos, suddenly every other zone had less score and level even though I had several rivals there.

Steps To Reproduce:
I reinstalled the game because the game stopped working when the game started, but got the game started after reinstallation. But it did not help. still had 10 rivals on Farmland. So I had to destroy all the rivals on the map except on farmland and on himfjäl. So now I’m running a theory Test to see how many rivals I can get in a zone.Have run several theories since the game came out, on the game/ in the game play.
Images / Videos:

Sorry for writing so much, this is my first time and want to do it as well as possible. Hope you understand, have a nice day. 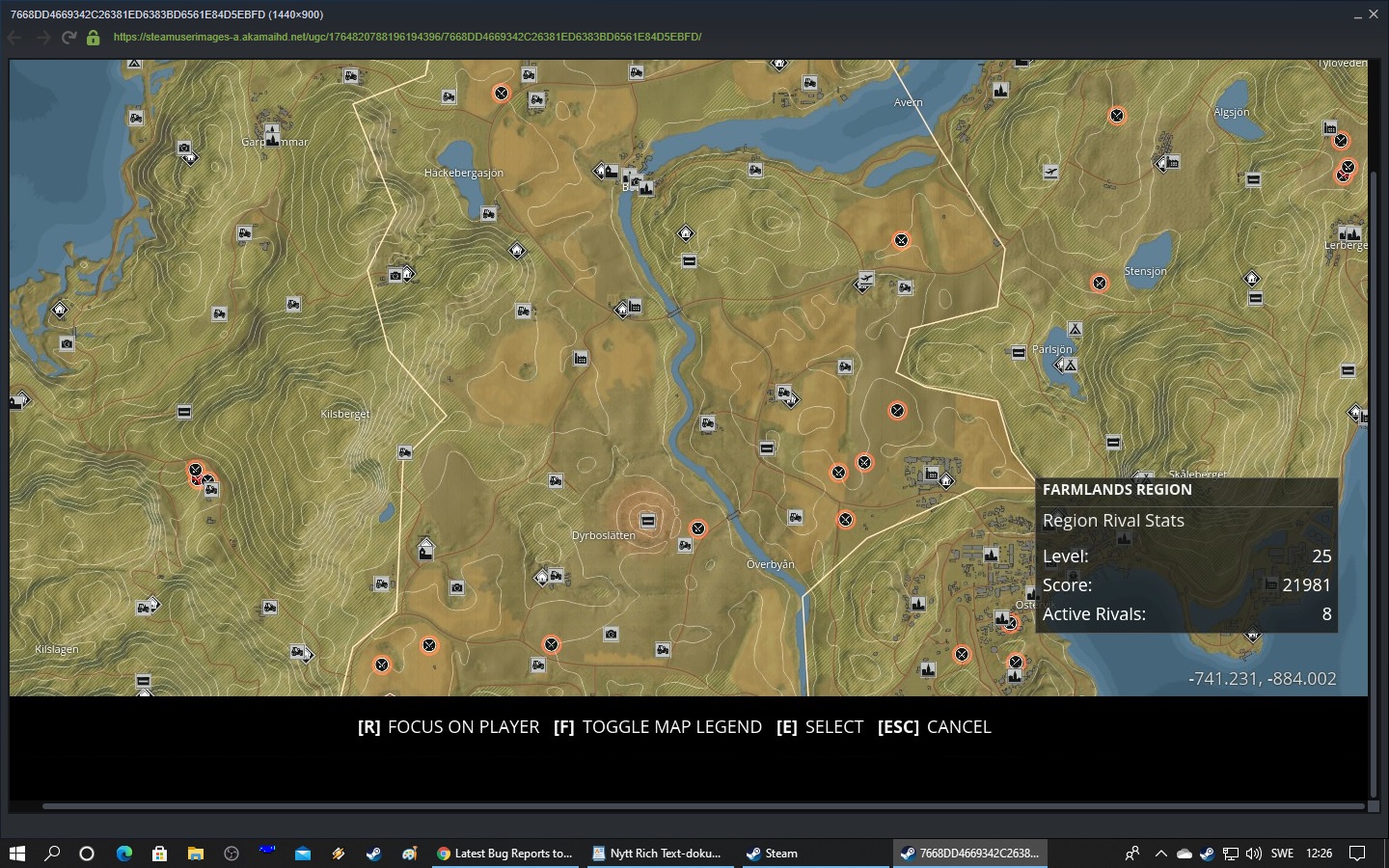 The Rivals can wander around, and after an update are often scattered across all of your areas. There was one update that had my Rivals from Himfjäll roaming the Marshlands.

The number of Rivals in an area (confusingly) isn’t necessarily the number of Rivals actually on the map in that area. They can be (and often are) in entirely different areas. If you click on a Rival to bring up it’s profile you can see what area it is “assigned to / from” and often it’s not the area that they’re located in.

I suspect what happened is that you had Rivals that had originally been spawned in other areas roaming the Farmlands region. There’s no limit to the number of Rivals wandering around in an area, just a limit to them spawning in that area.

I hope that makes some kind of sense.

So the 8 number of rivals in 1 zone is not true?

It is correct, however - the rivals can move sporadically around the map.

Just be sure to look at the rival profile

oki thx for your help

I’ve merged this report with one that already covered the issue back in November, last year.

Although it seems like the matter of Rivals moving about is intended, I’m going to poke
the powers that be and see if we can get an official explanation.

What bugs me about the rivals moving around is that they are assigned to a certain region. Why can a rival from the Northland be found in the Southcoast region? To me this doesn’t make sense since they are some sort of revenger or mini boss. This region assignment and intention of introduction seems more logical when they are found in their region.

The funny thing about the actual implementation seems that they wander into the Farmlands most of the time making this region an accumulator of rivals.

We have a ticket for tracking this issue. We have yet to get to the bottom of it, but there are speculations that this might only be an issue with “old” rivals created before a certain patch, and that newly spawned rivals shouldn’t have this issue. It has yet to be confirmed but it is a theory.

Any information you could provide to shed more light on this would be most appreciated, e.g. if you kill off the affected rivals, do you still see this issue with newly spawned/created rivals?

Happy to tag in on this one on the Xbox side.

Currently have only 7 Rivals, and 1 Reaper in the Farmlands.

Rebuilding Himfjall this week - if they jump from the farmlands out of region across the map I’ll flag it.

this might only be an issue with “old” rivals created before a certain patch, and that newly spawned rivals shouldn’t have this issue