The Screenshots are from yesterday and today.
Where is the proof that they aren’t new?

Maybe GZBizz is thinking of the older resistance clothes that have been out for some time now. Which are different than the resistance FIGHTER apparel.

None of these clothes were listed 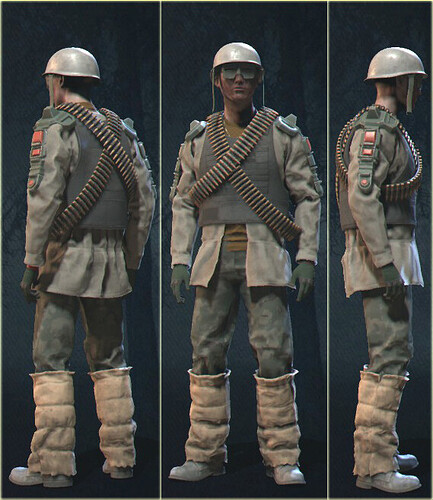 Got the helmet in multiplayer today from EBBA rival.

My bad, I should have said “none of these clothes were listed till the recent release for this event!”

Why can’t we get a new set to search for instead?

You see the problem?

Because they forgot the anniversary was coming up? Lol, that’s like me forgetting my birthday is coming up…wait…I did.

Nope, I’m sure the resistance fighter set has been out for a while. Gysbert listed it here on the forum back in June 2021.

Finished! Together with the help of the members of the GZ community we compiled a Complete List of current Apparel items, including a picture. What is Apparel? “The definition of apparel is anything you wear to protect, wrap, or beautify your body. Not everything an individual wears would be referred to as clothes. A jogging suit is an example of sports clothing you wear. But also luxury items, like jewellery, watches, or an alligator-skin handbag. And also all footwear and headwear, inclu…

The Resistance Fighter set is new, the reason it’s posted there is because he updated that list as a result of the event.

Yes I have all been from Fnix rivals have everything but the coat. And I have a feeling that isn’t going to happen. The Fnix are starting to become really scarce

Gysbert listed it here on the forum back in June 2021.

Hmm… nope, I guess he edited his posting from June like one or two days ago to put the new clothing in

he edited his posting

Jun '21 is the date I started the listings. If you mouse-over the edit icon you can see when last edited. That was indeed 2 days ago.

Hey everyone, and glad to see that you are getting the loot as planned! As the event had a little slow start we’ve decided to expand it a bit for you. The event will now end on the 11th of April 23.59 CEST instead of the 8th as first planned! Keep being awesome and killing those machines!

I just killed all rivals again, but no, I repeat NO new clothes. Even no experimentals. Nothing special. My buddy indeed finished today while looting my killed rivals.

I was wondering if anyone is having issues with rival spawns. My wife has been grinding on hers and all she can get to spawn is the Reaper. Not really complaining, but it’s not dropping her any of the special clothes. If anyone has seen this issue any help would be great

I’m also playing on Xbox and I have the same feeling: rivals aren’t spawning at the same rate as usual. And for some reason the reaper spawns despite only two other rivals has spawned previously. On the other hand region level being 17 at the time.

But it’s more of a feeling than hard facts.

Also more feeling than facts is that destroying wolves, lynx, runners, seekers or hunters don’t trigger any rivals to spawn… or is this just me having bad RNG days?

Since the event started I started with a map full of rivals and now I have all the clothes from the event I am rebuilding the region levels and trying to do so WITHOUT the rivals.

Remember that there is a 2 hour cool down between rival spawns in the same region. You can level up a rival if it is not already at level 4 but it takes 2 hours, about, for another rival to spawn in the same region. So after a rival has spawned, move to another region or grind the rival up in levels during those 2 hours. Rival spawns also have to do with points from destroying other machines, any other machines. The points go to rivals and the region and if the player is not to level 31, the player.

If all rivals in a region are level 4 then the region gets points and as soon as a rival spawns extra points goes to level up the new rival quickly. If you are building up a region, then destroy as many machines as possible in the 2 hours. I destroy any rivals that are not harvesters also as soon as they spawn.

Why only keep Harvester Rivals? I know Hunter Rivals have terrible loot but I thought Tank Rivals had the best.

Harvesters are good for hunters to spawn. So I milk harvesters for the hunters that builds the region levels back up and that spawns in reapers. I do let tanks rivals stay but not to many.

You let a harvester know you are close, the hunters chase after you, you pick them off one at a time as you dodge the harvester rockets and once she will not call in anymore hunters you leave to milk another one. It beats running around a empty map hoping for something to shoot at.

I’ve done a few hours in the free time I’ve had on Xbox series X , only dropped a few items so far jackets seem more common , so far 3 jacket drops one helmet and shoes, I seem to be getting more off Apoc rivals!

Remember that there is a 2 hour cool down between rival spawns in the same region.

Tried to change regions directly when spawning a rival in one, and all of a sudden I was spawning rivals all over the place!

Definitely Apoc rivals are the best bet for drops. I took out a level 4 Apoc Hunter rival on Himfjall more out of desperation than anything else as Hunters tend to have bad RNG for good loot. This machine offered me a EXP KVM59, 5c COM-10, resistance jacket (red) and the Resistance Fighter Goggles which what the last piece for me to find! He was a most generous rival.