Why, oh why do some make to "my taste" weird suggestions

Just armed with a couple of flares! Just shows you, doesn’t it? Cool strategy…!

I bet that if I hadn’t thrown that flare on the runner, I would have made it the whole way unseen

EDIT: All my clothes reduces either visibility or noise

That’s what they keep telling me. Like I said, worst case of placebo ever

Nah, it’s probably some bug that does it. The robots have had a really hard time noticing me since I started playing again. But I remember a couple of moon boots that made you run faster. I take it they don’t work anymore. My brother had a pair but he stopped playing

I think that last Hunter would have had something to say, and anyway, a Dog will spot you that close and fire instantly, at least that was my experience when one stepped on me…

I know right. I’ve got taken out a lot of times before but since I started playing again, they’ve gone blind. I’ll show you another one:

It also helps to open the door underneath and jump onto that.

There’s also tactical gloves, which I’m yet to collect more of, and tactical helmets with flashlights and stuff. Gives me a bit of an Aliens-feel.

Besides experimental (tactical) helmets, there is also experimental eyepiece. Latter glows outside of inventory/profile view when looking from 3rd person view.
Here’s what i’ve collected so far: 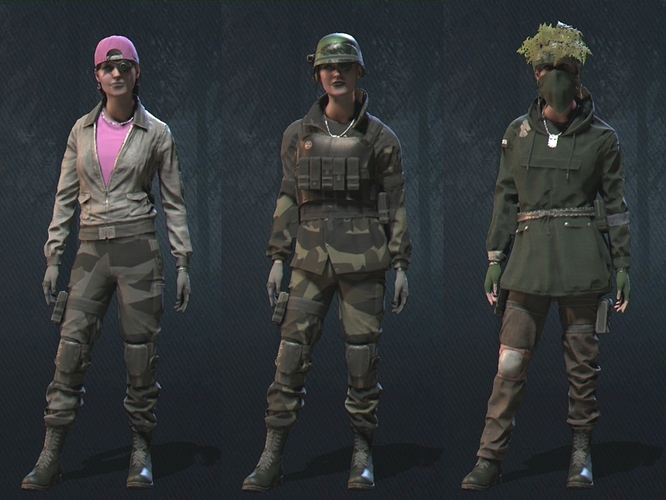 I will never understand why people want to make every game they play exactly the same. I see it all the time in this forum this & that game does/has why can’t we… Inventory like Fallout, Crafting like (insert game here), Driving vehicles like (insert game here), Base building/Easy mode for single player/Melee weapons/Modern laser sights…etc. I like the guerilla action always on the move, inventory restricted, 1980’s feel of this game myself & see no reason why it should become a carbon copy of so many other games on the market…Will add there are some good ideas out there that do not involve turning this great game into a carbon copy of every other game on the market (example chalk to mark last searched house or way in bunkers) that could keep with the games feel…But sadly it looks like my opinions are in the minority camp here in these forums & in the Developer stream chat.
Thanks for reading,
SPP

OMG I made a posting without Clawfinger !

That’s probably not even legal!

OMFG!
That is THE best number of them…
I love CF.!
How so, illegal? o_O

There’s some tactical stuff ingame. Took me a while to collect, but it does make you look like a badass.
…

I know, thank you, but it ain’t black.

@Bootie
Maybe you like the Cro Mags?
https://www.youtube.com/watch?v=vkITlCa-r6k
Blues-metal type of thing.
Love your song, really.

Wait, what?
Yes they do…?
Make you look different… and not so nude.

I will never understand why people want to make every game they play exactly the same. I see it all the time in this forum this & that game does/has why can’t we…

SAME!!!
I too go guerilla all the time, deal with what I get into, move on.
And on, and on…

Have you ever embraced any change in your life?

Have you ever embraced any change in your life?

Of course!
IF it suited my wife and kids.
Never bought a Boeing for one, as I do not quite need it, if you get my point…

Change is needed… but it has to fit the rest.

See, if you make a game about deep sea diving, then you do not need to add a soccer field, right?
Unless deep sea soccer is an actual thing.

See, if you make a game about deep sea diving, then you do not need to add a soccer field, right?
Unless deep sea soccer is an actual thing.

How is that even a fair comparison? you are just silly when it comes to changes that actually benefits the game and the community

How is that even a fair comparison?

Sir… where did I compare ANYTHING?
What I did was make an EXAMPLE as to why I dislike certain things in this game, which I quite thoroughly motivate as well.

Examples from the past:
Plundra: I disliked it, since, it would imbalance the already lost balance even further.
This is ignored, and balance INDEED became even further imbalanced.

Bikes: In real life, when your country is invaded by machines (and please ignore the fact these machines are improperly functioning), would you, in all honesty, hop on a bike and drive over open roads etcetera?
If the machines worked properly, you’d be dead before you even THOUGHT of biking.

Sir, this game began as a sort of survival game.
Machines in the very early days were DARN deadly.
Along the way, these got neutered: reason unknown.
Could even be an unwanted side effect of something added/changed, that corrupted the machine AI.
In a game such as this, base building just is not a good thing.
You simply do not have the time nor the safety to do something like this.
MANY said, the lack of NPC’s was one of the best things of this game, giving the game a special identity.
This then, got neutered in the DLC with the survivors.
@Avalance And please let this the ONLY ones ever in GZ? Thank you.
Hence I too do not like NPC’s: it just rapes the identity of the game.

I am all for change.
Hell, I made SO many posts with ideas.
But these would fit in the game’s identity, it’s atmosphere and story telling.

Now, as example:
If GZ was a deep sea game…

Not a comparison… an example.

Can’t argue with a logical answer xogs is right

BTW, @Beomez the LMG came from me originally.
IMHO, it was baffling that, sure, we had military, we had bazookas and AR’s… but no LMG?
That was a missing weapon class all together.
So, yes, I do like change and additions.

Also, you might check this post by me: [SUGGESTION]New enemy types - Remade
Or: Machine Master (AKA Pet Master)
and others.

I even made a post in which I spoke of ALIENS invading Earth.
But the aliens itself would not be here, instead they primarily used our machines against us, controled from out of space, and in later DLC new modern machines would be implemented.
This could lead to a whole plethora of options, of which for one energy weapons of various types, body armour, other types of tech…
But: it would be MACHINES and nothing BUT machines, so, basically, simply in line with the base of the game.