December Update - Inventory items sorted based on quality level. Like or Don't?

Which do you prefer?

Personally I liked the old way better as it allowed me to group my gear the way I wanted. All the stuff I used frequently I would place at the top and work down, that way when I’m in combat and have to grab something quickly that isn’t already hot-keyed like grenades, or more Emps, or landmines, etc… its right where I know it is. With the new update they are all over the place. My ammos are no longer grouped by type 5.56 AR then FMJ, .50 AR then FMJ, 7.76 AR then FMJ etc… Explosive tanks are no longer next to gas tanks and car batteries, etc…
And the worst is I’ve already recycled some of the ammo and gear I thought was crap because it was now at the bottom of my list where NEW stuff always went, but turned out it was my good stuff. GONE to the recycle gods! Doh!

If we had an option to filter how we wanted to sort gear that would be best, but if not then I would rather at least be able to sort it the way I wanted using the pre-update order of pick up method.

I voted for pre-update because new system would work pretty fine if it wasn’t implemented that bad.
Sorting by quality is a very good way for people, who would hoard a lot quality-based stuff. Now I can quickly filter out experimental, good quality and “trash” that I use for lulz to equip very fast. Very messy problem is - order within same quality and order without quality tag. “Within quality” ain’t that bad, because you usually don’t have that much stuff and it could be found quickly even if it shuffles. “Without quality” - this is where all this mess starts: ammo and equipment shuffling constantly, making extra effort to find certain item, that would jump to either side of list after each change. BTW some times scroll bar acting weird, like not changing after dumping/grabbing up to 4-5 different items.

I tend to autopickup everything and then sort out the trash and dump it later. It was easy before cause everything new was at the bottom, but now I spend 2-3 times longer going through it all scrolling up and down the list looking for what’s new, which is now mixed in with the old stuff I want to keep. The fact that I can’t group the ammos or similar gear together anymore is the most irritating. Guns and attachments - fine. They have a quality level, but regular gear and ammo does not and should be left in the order you pick it up to allow you to sort it the way you want.

True. IMHO that’s the best solution.
My inventory was a mess after the update. And aftet updates you can always expect something that you don’t like. It’s like the saying, one on the nail another on the horseshoe.

I liked the old system a lot more since it had a easily understandable logic in it. Everything you pick up/add to the Plundra - was at the bottom of the list.

With this, albeit by tedious way, i was still able to arrange my inventory and whole Plundra as i saw fit.

Now, everything is messed up beyond repair since we can not re-arrange anything.

Before, i had my main weapons sorted like so, from top to bottom: 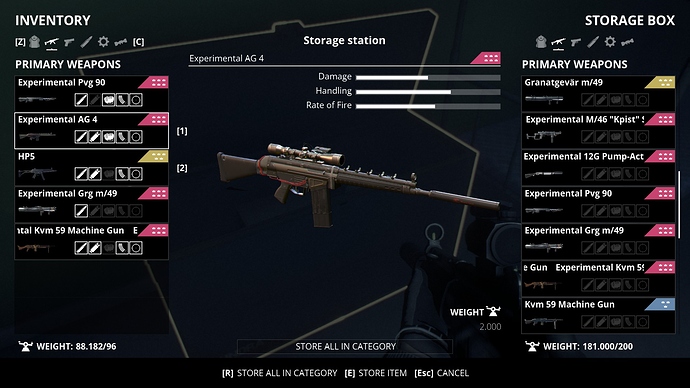 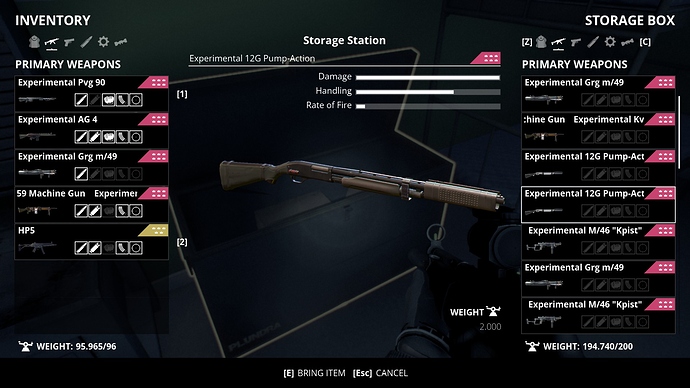 Just like with main weapons, i had my side weapons also arranged to my likening, from top to bottom: 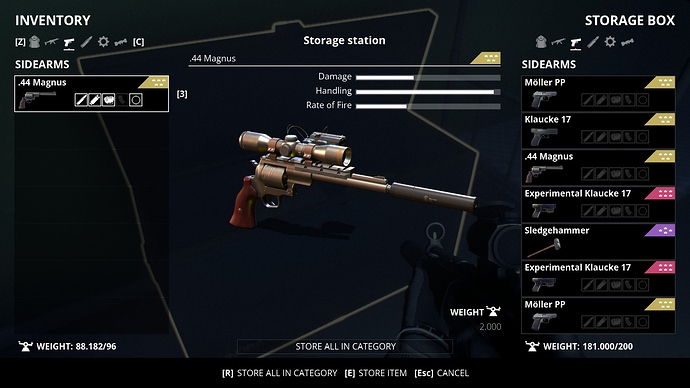 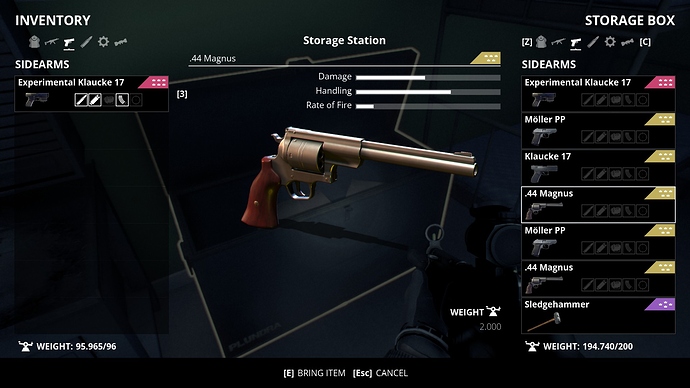 Only saving grace is that i don’t have many of them and i can easily pull out both variants to see which one i have for trade.

Before the update, i had my ammo sorted in a logical way, where in the Plundra the ammo i use, was at the bottom of the list. That made finding them very easy. And i even sorted the ammo in my inventory, so that most precious ammo is at the top and expendable at the bottom. 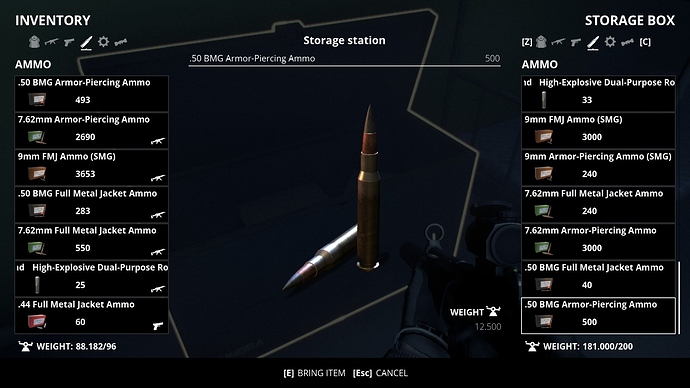 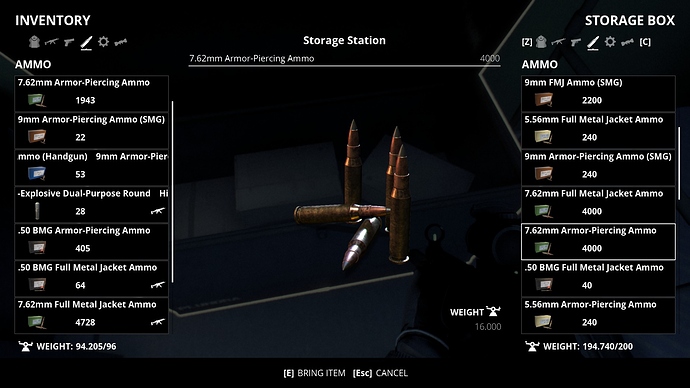 Now, there is 0 logic to the ammo sorting and it is very tedious to find the ammo i use. What makes it worse is that the inventory sorting is different from the Plundra sorting. Note: for collection purposes, i have every type of ammo in my Plundra, that i had ordered neatly. Now they all are mixed up.

Since i don’t use any throwables and i only have few rare items + first aid kits and a-shots in there, their order, somehow, didn’t change. 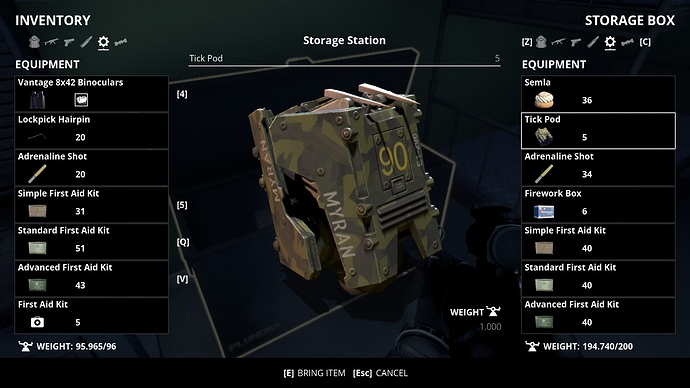 Of course, people that do use more equipment can have their order messed up.

Before, i had weapon attachments sorted in Plundra like so, from top to bottom: 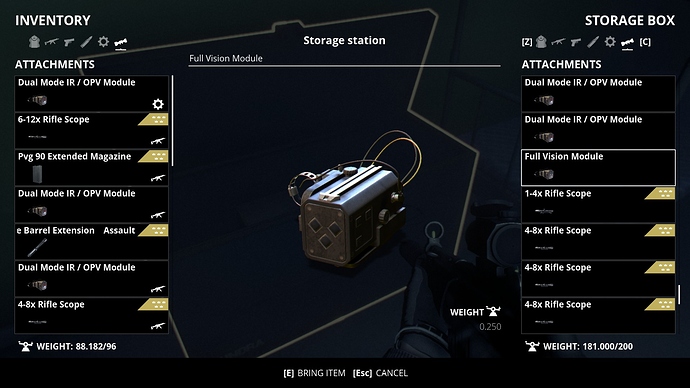 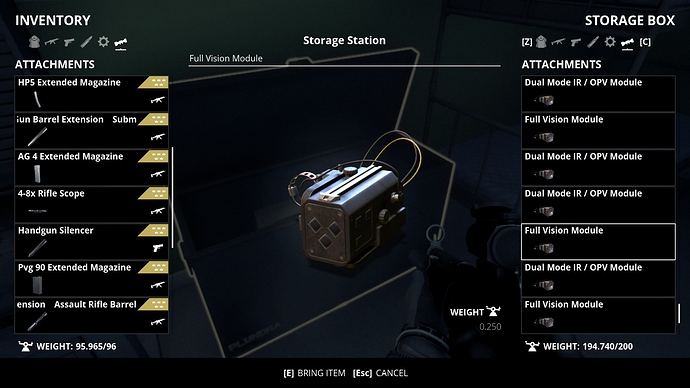 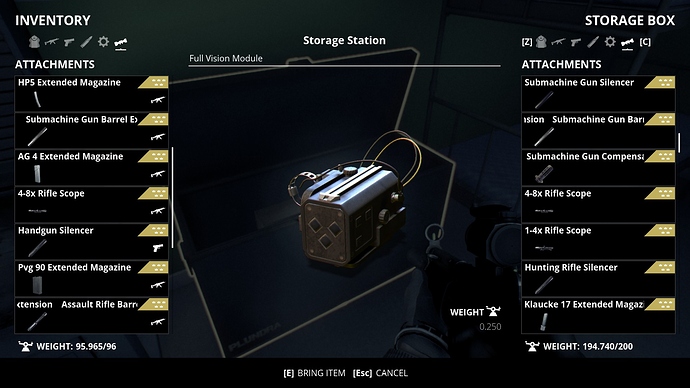 Even crafting materials have been rearranged. Before, i had them sorted as so, from top to bottom: 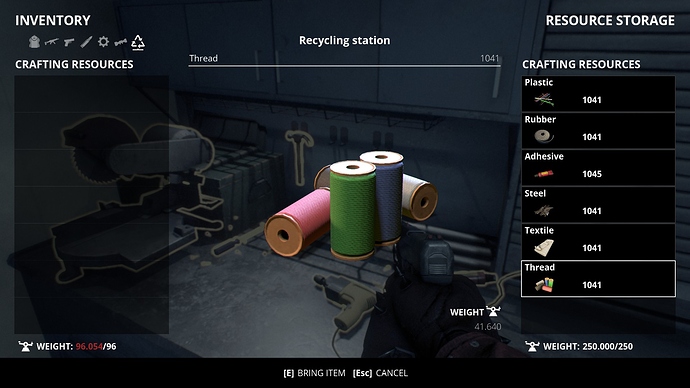 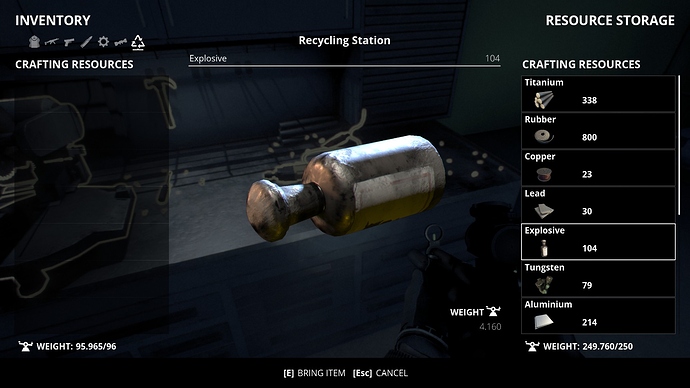 While it doesn’t matter which way the crafting materials are sorted, it is still annoying that their order is messed up.

I think it’s a first step, nothing more (I wonder why not implement it all the way).
Sorting by quality sounds good at first if you have only items with quality stats.

But since only a few items have quality attached to them, most items are unaffected by this.

I totally agree but I would consent with quality and alphabetic sorting only. Alphabetic is totally necessary. And please include this asap not in several months.

Some valid points there @Aesyle @knobitobi.
There is something else we also need.
When choosing how much ammo quantity we put or get from the inventory and Plundra, we sure could get a faster version.
Looting from machines is not really affected because most people just choose what they get from it, or retrieve everything.
But selecting quantity of ammo or crafting material to put or retrieve from something tales a long time…

This is another topic to be discussed somewhere else. Namely in here: Please adjust inventory slider [solved]. “Fix” there in as well.

I take any sorting now, its just matter of getting use to the order of items. But after that is learned, it helps. Items appear in same order always.

But since only a few items have quality attached to them, most items are unaffected by this.

You are mistaken. All Items were given a quality rating. If ammo, crafting resources, and equipment did not have a rating then their order would not have changed and I could reorganize them as I like (like I used too). Just because you don’t see the “quality” 1*-5* tag on them doesn’t mean they weren’t given one.

Speaking of which… what I find odd is that the value seems to be reversed for some of the gear. Why are Simple first aid kits above Advanced or Standard in the list. Aren’t the higher quality stuff supposed to be on top?

Guns and attachments - fine. They have a quality level, but regular gear and ammo does not and should be left in the order you pick it up to allow you to sort it the way you want.

You’ve put my thoughts into words. 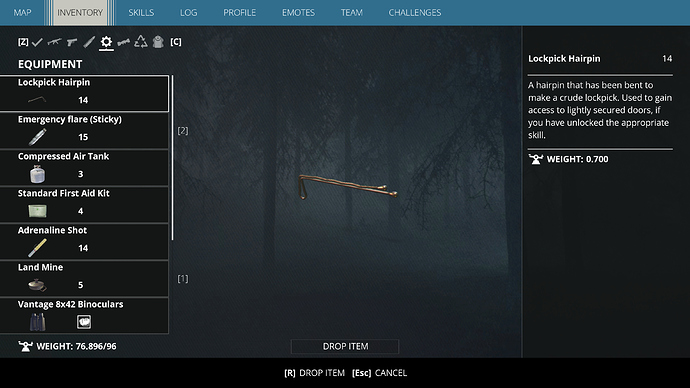 You are mistaken. All Items were given a quality rating. If ammo, crafting resources, and equipment did not have a rating then their order would not have changed and I could reorganize them as I like (like I used too). Just because you don’t see the “quality” 1*-5* tag on them doesn’t mean they weren’t given one.

Now this is getting weird. I’m scratching my head why the other items - those which do not show a quality - have such a ludicrous sorting? Who decided this? I really want to understand the mindset behind this sorting. That makes the alphabetic sorting option even more necessary.

I personally like the new sorting of quality since I usually scrap lower quality items. But perhaps there should be a sorting/filter option for the inventory. Fastest example I can come up with is The Division 2, where there’s plenty of options.

I’m personally not gonna update my game till I have too after reading how things are sorted. And as far as alphabetical sorting it would be in an easier order to find stuff but still not ordered in a way I would use. Because advanced first aids would be next to the top but simple and standards toward the bottom and not next to each other.

I voted post update, because I just love to behold the content of the Plundra with all the pink 6c followed by all the gold 5c stuff

ok, kidding aside
The ‘sort by picked up date’ does not appeal the best for me, as I tend not to remember when I picked up what. And I also find it looks somewhat messy with a big list of items.
The sort by level/grade looks much cleaner to me.
But in the end I can live with either version - and any way it lacks features that I could think of as being useful:
-stacking several items of the same
-in the attachments section especially, being able to have a filter of some sort (like magazines, scopes, stuff for a specific weapon class etc.)

You can update the game.
The changes are not a big deal.
I have not found any major bugs.
It´s not the disaster that the April update was.
It´s safe

Aight I will when I get home. I’m just going to miss my organization with stuff. Smallest caliber to largest for rifles, ammo, and attachments.

6 hours after playing the thing that i sense more difference is not finding the binoculars at the top of the inventory, the rest i´m already used to it.
Basically easier to get used to than Last Year inventory change.