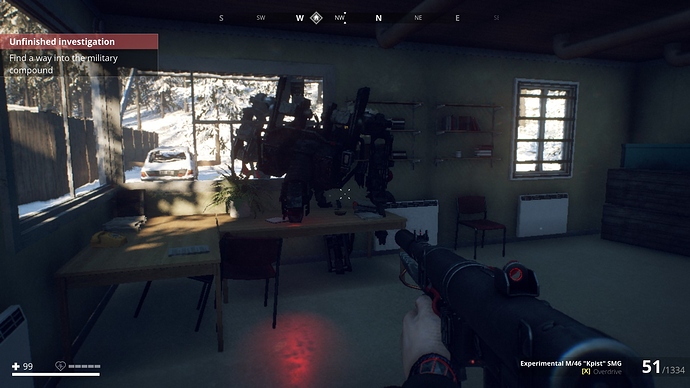 I was sipping my tea before looting this harvester, and missed my chance!

That’s where those disappearing enemies go. They go straight to hell!

Lol! Pretty impressive that you caught that on video! A genuine WTF Kodak moment. I think that @SteampunkPagan had a video clip of a few tanks taking off to meet with God

Speaking of Easter eggs has eneyone found some?

Easter eggs - spoilers, so venture here at your own discretion

Yeah, they’re annoying. I’m not a fan of the challenges, but all the others had filled up so the ticks one was sticking out like the proverbial sore thumb. So one day when I was in a house and a tank couldn’t get a line of sight but kept sending batches of three ticks, I just put on an audiobook and took an hour and went all OCPD on their asses. I’m not proud, but everything is nice and clean now.

At least that Hunter never saw it coming

Neither did I. Had to change my underwear afterwards 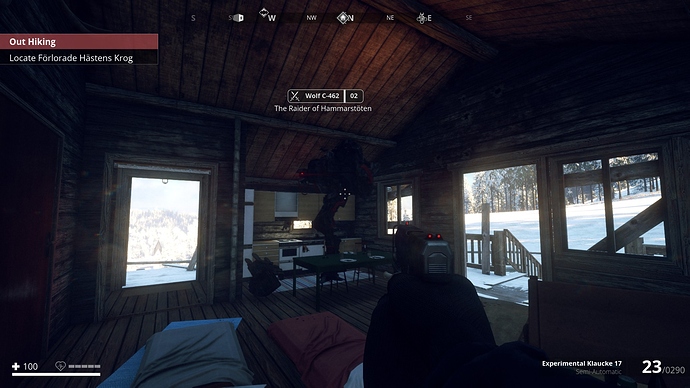 “I just wanted some eggnog…”

Wolf C-462 hobbled back to his cabin after a long morning’s patrol. The blizzard had frozen his joints, the squirming ticks in his backpack made him itch, and the whir of the korpen accompanying his squad had been grating on his CPU for hours. C-462 was tired and fed up. He dropped his heavy flechette launcher by the fridge with a thump, and went to pour some long overdue egg-nog. Then he heard it. Heard that creaky floorboard, the one he’d been meaning to sort out all autumn but somehow never found the time. He had a visitor. C-462 turned his sensors toward the dark corner and made out the shape of a survivor, rudely pointing a pistol in his direction. “Thursday,” he thought to himself, “I never did like Thursdays…”

“… and after my L2 cache update with SCI NUMA to the mainframe, there is really no challenge anymore. I don’t dig shooting sitting ducks, and it surely feels like that.” C-462 trained his left arm gun at the intruder. After 2mS of calibrating the regulation loop, everything was set up for the kill. “But why? What is the point? I’m stuck as a guard of the North-Western slope … probably forever. And what’s this poor guys story?” A safegate signal de-asserted and the trigger signal was only a NOR gate propagation delay away …

You are not alone…

My walkthrough of “The Old Guard”

That’s what I forgot to buy! I knew I needed some lemonade for something! Eggnog. Got some in the cupboard and was determined to have it this evening. Forgot the lemonade.

And works better than flares for Hunters, too. They go mad for it…