Here is a place to pitch ideas for new machines.

Don’t be fooled by its slender appearance, this humanoid machine is the most advanced model ever created. The Scout has an extremely complex processing algorithm that allows it to make quick strategic decisions.
Its physical nature allows it to be agile and very fast, but this also means its armor is lacking. If it detects a threat it will often run away, but on occasion it will engage in combat if it senses an advantage. 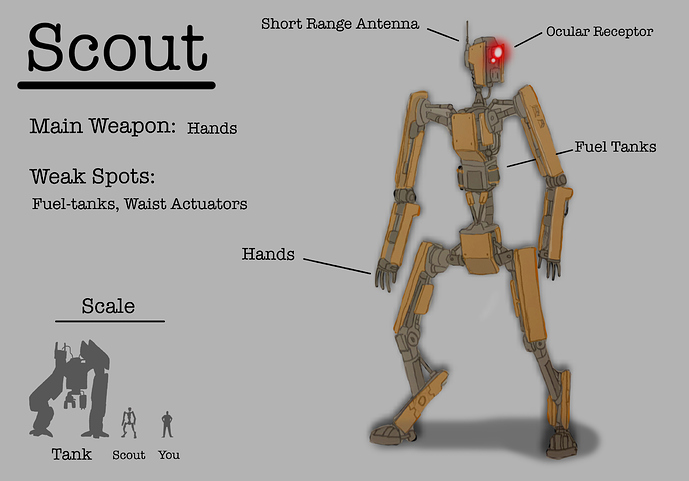 Very bonk, however it doesn’t really match the game’s over all style, which is more solid types of machines that could potentially fair well in an actual combat zone. What you really need to think about when making concepts for games is: ‘Will this work with the game world?’ and/or ‘Will this bring new challenges to the game?’ and/or ‘If I take into consideration the factors that the scientists and military in-game took when designing the machines, will it make sense?’

I hope this helps in future, but otherwise great sketch!

Will it fare well in a combat zone? Well, the Seeker does not either, at least not when I am around.

I find the hands idea not bad at all. The thing could hurl stuff at you (rocks, car doors), climb trees, and other stuff. Something a little smaller, ape style comes to mind. Would sit high up in trees, lurking. Could swing/jump from tree to tree, be fast and hard to trace (no linear trajectory).

Well I guess seekers are an exception! Sorry I forgot!

This is exactly what it’s supposed to do, it’s basically a very dangerous seeker, that can get almost everywhere.
I Imagine it would fare well in battle. As always difficulty would be based on its class.

As for the design, yes it is much more slight and slender, but this is because of its job, infiltration, observation, etc…

Great artwork in any case!

Thanks. I would love to see more concept drawings on here.

Sorry if I’m stupid. It’s late for me.

It’s relevant, I like the feedback. It wouldn’t do if it looked out of place.

There’s a thread similar to this one, where I posted some of my creations back in October.

I know it may be not a wise idea to potentially argue with a Mod, but is it alright if we keep this thread for general concepts and not just machines? If that’s okay.

I don’t see any problems with it

It’s fine, but I challenge everyone to have at least one detailed concept drawing for each new idea.

Challenge accepted. I’m working on a flying Machine, since that’s something people seem to request a lot

The Eagle is first and foremost a reconnaisance craft, and can employ numerous such devices beneath it’s wings. It can however also deploy weaponry, (image featuring attached, single-shot Granatgevär M/49 in the central compartment) for hit and run tactics on enemy ground forces.

The craft is fast, mobile and uses twin rocket engines for speed boosts. It carries little to no armor however, and can be disabled with a few direct hits with small-arms weapons like the hunting rifle.

The FNIX variant deploys a variety of weapons, amongst them a vicious 9mm rotary Microgun (image) and surveillance systems to detect humans, and alert reinforcements. It is slightly more sturdy, but again does not carry much in the way of defenses.

The presence of an Eagle can be recognised by the sound it’s afterburners make as it speeds into a combat zone. Taking them down should always be priority, or they will (like the Seekers) call for reinforcements. Once it’s munitions are spent, it needs to return to the nearest Harvester to re-arm.

I might put an idea I’ve been working on here if that’s alright.

I’ve always been skeptical when people say they want humanoid machines in GZ, Not gonna lie though, you totally changed my mind. The scout you drew looks awesome. I would love to see your take on an army and FNIX version as well! The fact that it isn’t focused on combat is what makes it interesting.

Very bonk, however it doesn’t really match the game’s over all style, which is more solid types of machines that could potentially fair well in an actual combat zone.

I would argue that a humanoid machine that can use readily available tools would be of fairly high priority in 1989. The Cold War had yet to end, and just three years earlier the Chernobyl disaster served as a grim reminder of how messy the aftermath of a nuclear explosion is. While unlikely to match a human in dexterity, a machine that can perform tasks such as cleanup, simple repairs and even gather intel in hazardous environments would be priceless for the Army’s engineering and R&D branches.

Those machine sketches are really good. It’s a good start.

Now I present you with:

A reasonably good idea but very poor execution concept drawn in the men’s washroom at the bar during break. 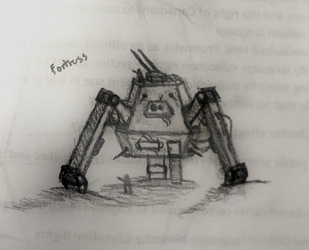 I drew this in five minutes at work after pulling a piece of paper out of the recycling bin. I will probably provide more details on this, but I’m a bit busy now.