Sorry, I do not mean this in a bad way at all,
but I simply HAVE to say this, you do all know (everyone that is posting these truly great idea’s here in this toppic) that we are making the game SOOOOOO much harder for ourselves if the Devs get to read this, right ?

OMG, when I read some of these marvelous idea’s like the Tick carrier …
Can’t stop thinking about the fact that with all these (truly!) amazing enemies I woun’t be
able to enjoy one more quite minute in the game right.

Anyway, with this beeing sayd, I truly love some of the suggestions in this tread, so let’s give this a go

First my thoughts on what has been sayd already:

Tactical spy drones: This is the point where I really start to love this tread and it’s idea’s, since IMO,most of the next suggest enemy types truly fitt into one single, greatly working together, type of enemy. How they are all one part of something bigger is what I truly like. Nice concept.

Like the spy drones silently spy (instead of loud seekers) and they report back to a second type of enemy that takes other actions to involve yet another type of enemy in the combat. Awesome.

Tactical Spy Drone (like seeker behaviour but quite) Awesome!
They either report to a Assasin bot (option 1) that comes out to kill you.
Or it reports to group of enemies further away that come looking for you as a group.

Assasin bots: I TOTALLY like the idea that they are camouflages and maybe just sit still at some place.
Terrifying if you suddenly see a bush come to life when you enjoy a quite moment in the game. So I like to have (no matter what design) a robot that is camouflaged and only visible when it starts to move to kill you. Awesome idea.

Diggers: Like mentionned before: Would be cool to have 1-2 (smaller) enemies in the game that are covert and strike you without giving temself away prior to attac.
I feel like the woods lake some enemies, so maybee both silent enemies could “live” in the woods.

Swarmers: Don’t like that idea. Reason is quite simple. I’m a tippical sniper and they sound
horrible and annoying. Muhahaha

Maybe exact the reason why we should indeed have them in the game. But please, not in every corner of the game. Maybe at some specific few locations. (They can change position, no problem, but they should not be all over the map. I enjoy spying through my rifle scope and aiming on enemies lot so I would not like to be harrased by musquito like robots every single time I look through the scope.

Ticks with pistols (handfireweapons): I think it is a great and logical enemy.
Runners and Hunters get upgrade to along the game so why not have ticks that have mounted handguns. I like the idea, cool !

Stunning ticks: Great idea aswell. Hunters emit ticks right. So the tick gets you stunned and the hunter finishes you of with a slach attack of his blade. Cool.

Last but not least: Titan Class mega robot. THis is a great idea. It’s sheer size. Awesome.
Now you see, THIS could really be an ennemy that CO-OP players could enjoy killing as it could keep them buissy (in another way as before in the game) with mutually destroying ennemy as a real team. Sofar we have groups of ennemies. So every team meber picks out a few robots to kill. This colossal Titan class robot would be so huge that he does not need supporting robots. So the fight would be focused on this massive walking airplanecarrier type of ennemy. Evidently it can be accompannied by other enemies to make it even more difficult, but the Titan Class Idea. Love it. In my mind I see itnow alreaddy, streching out over the tree tops. You can here it comming from miles away. terrifying. Awesome.

Annyway, these are just my personal thoughts.
Really love to read all these idea’s. Awesome

When I posted the tick carrier idea, I was thinking two things “oh wow this would be awesome!” and at the same time “oh wow this would suck to come across in game”.
If you have ever ran across a spider with babies on it like the one in the pic and you kill it the babies run in all directions at once. (Yes, there wasn’t much else to do in the countryside growing up). I can imagine running up on the nasty robot and knowing that killing it is going to cause so much chaos it might be worth it to let it live.

Also the best way to deal with the spider version (Not the robot) is to put a circle of lighter fluid around it and then kill it then light the circle they just run into the fire and die.

As far as making the game harder, I say good! I don’t want it to be an impossible game but I don’t want the game to be so easy that I don’t work for the wins I get too.

Hehe, we though about the same thing.
Wonder= Wow, would be greate to see.
Awe= Wow, would really suck to come accross one in-game though

This is why I stated that, although very cool idea’s, we are making it very hard for ourselves if these get into the game. Let’s hope, just for this point, that budget is not big enough, hihi

I have kept spiders (Latrodectus spec. - Black widow spiders) in my student age.
Lots of them.Now have nothing to do with insects anymore since I have my Frilled lizards and waterdragons since “almost” 15 years. The spider interest was lost, the lizard interest came to stay.

I must say however, (we all where young) that I troughly hope you don’t enjoy killing living spiders in that way anymore. That’s just so wrong and so … bad …

Well, I’m just ganno assume you did this when you where you. I also made my mistakes when being a kid, so no judgment there.

Anyway, with that being sayd, I like the idea off your tick carrier.
I haven’t thought about it the way you describe it now but it is a cool thought in a certain way.
Your in-game gutt would wanna tell you to kill that enemy but it could/would be just so much wiser to leave this enemy be as to not create chaos for yourself. This is totally in the concept of the game as they say themselves, it is sometimes wise NOT to engage the enemy.
So thats cool. Create a rather huge robot that is best left allone otherwise you’ll regret it.
Reminds us hardcore FPS that it is not always wise to shoot everything at first sight.
Nice idea

Here are a few ideas:
Note, NONE of these works are mine, I do not take credit, I only use these as example. 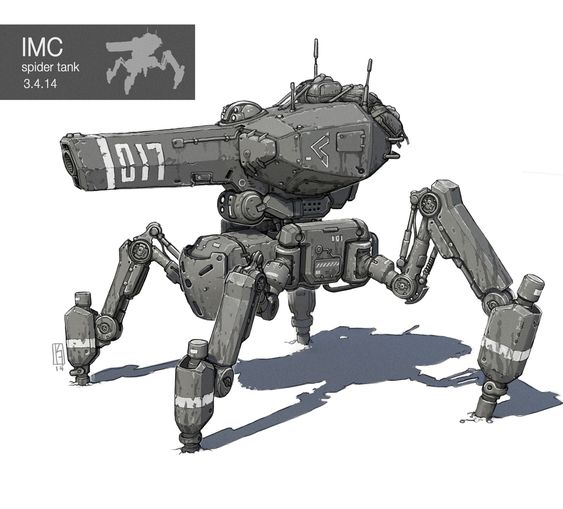 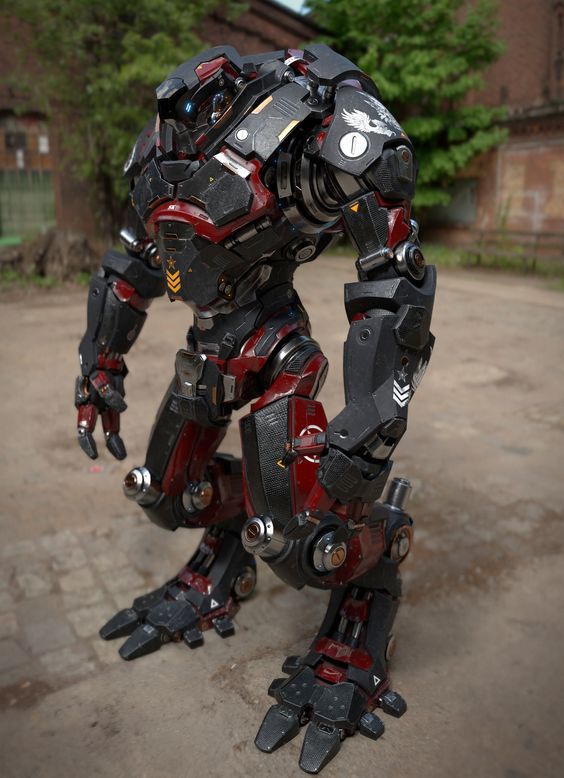 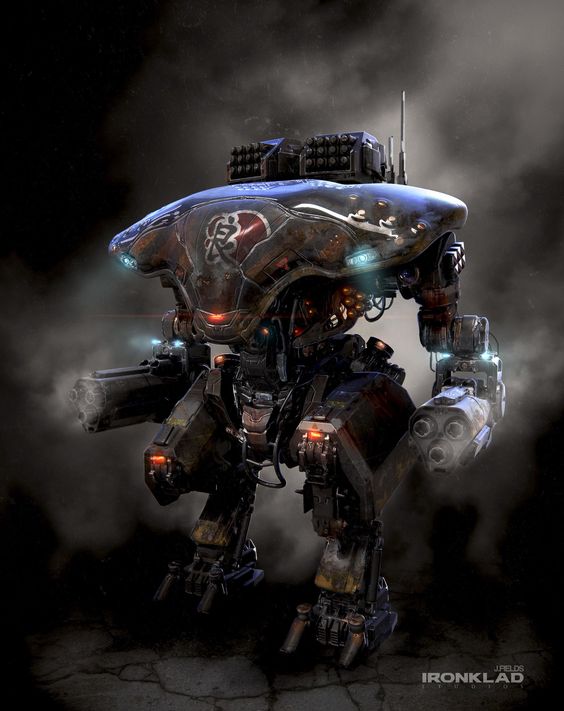 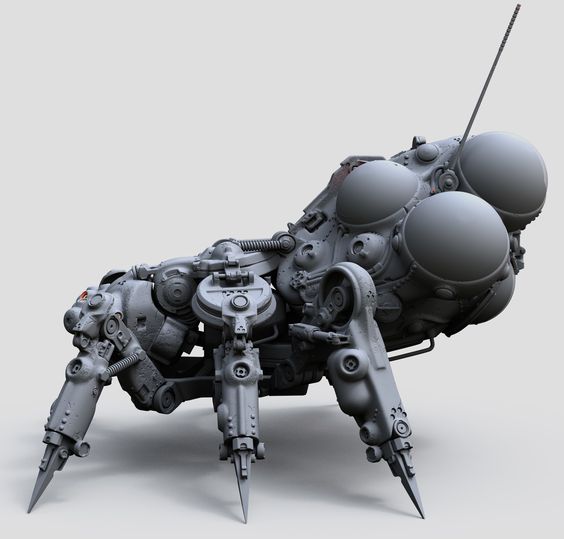 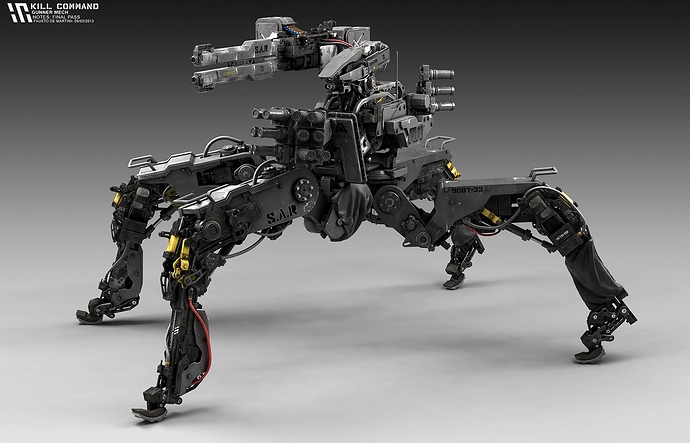 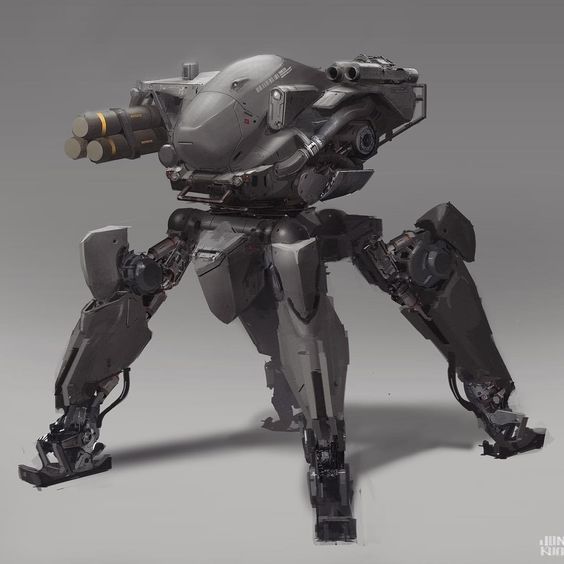 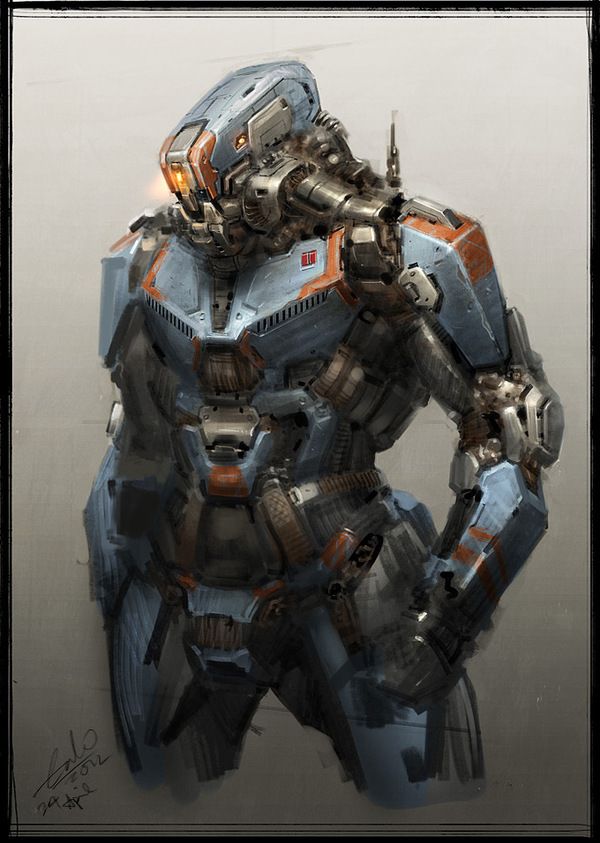 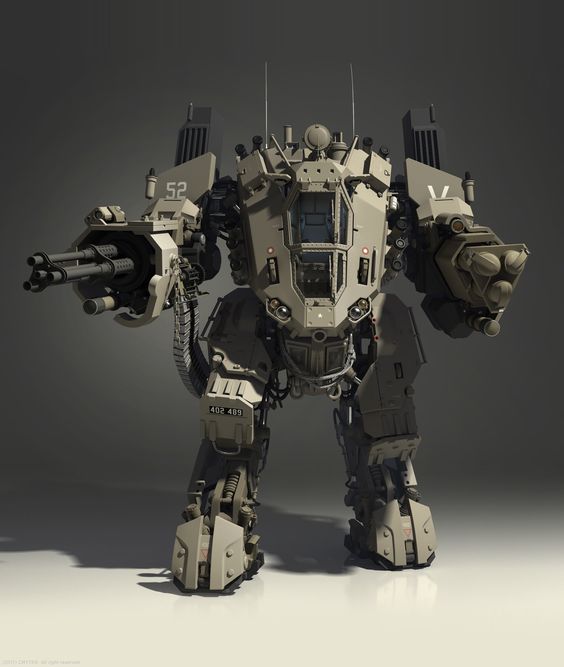 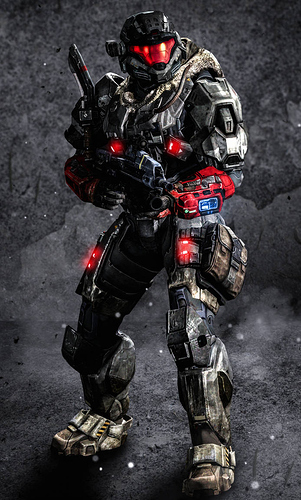 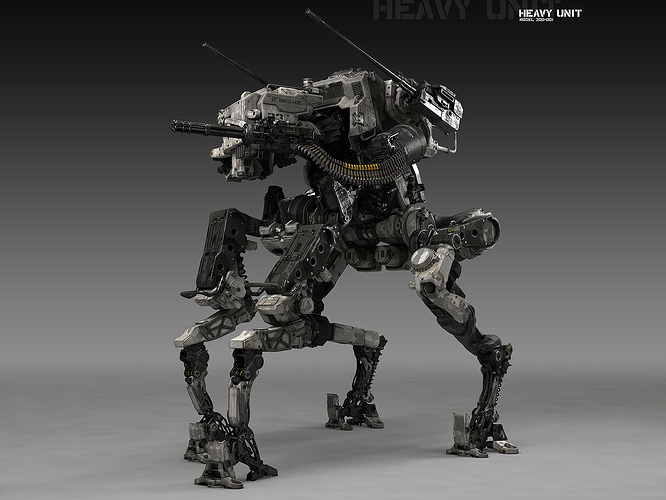 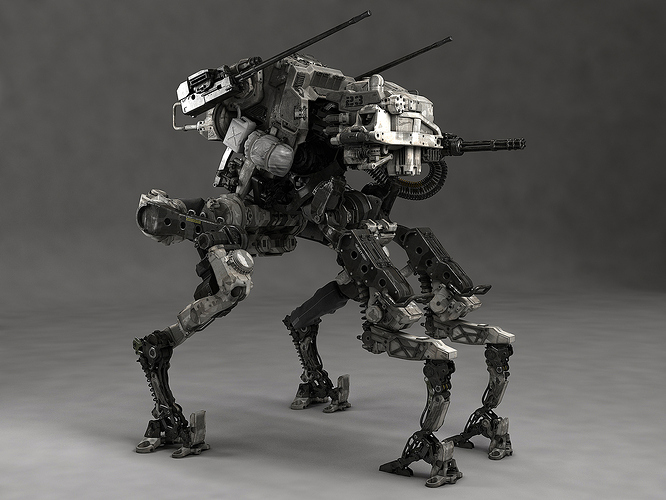 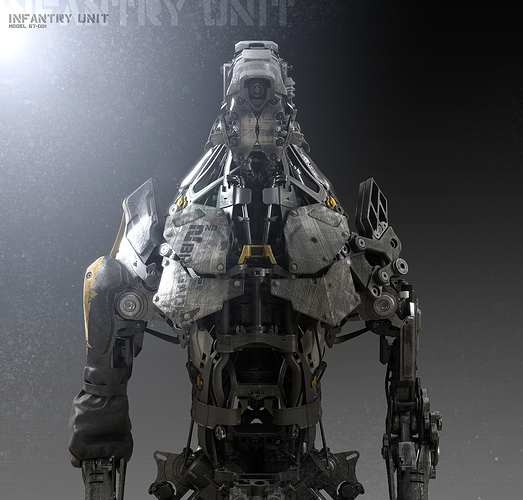 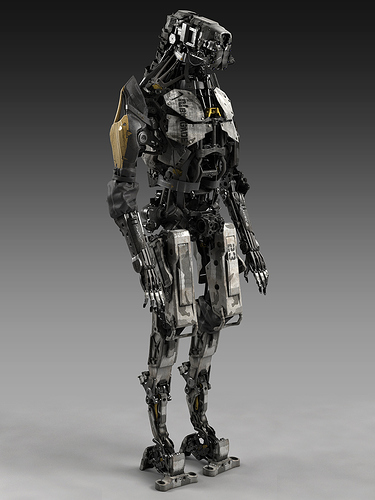 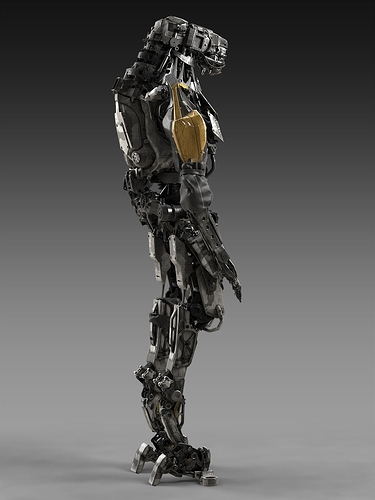 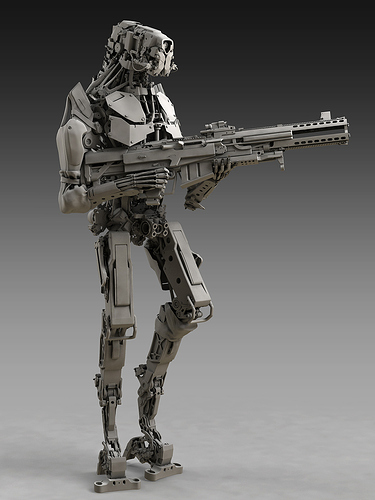 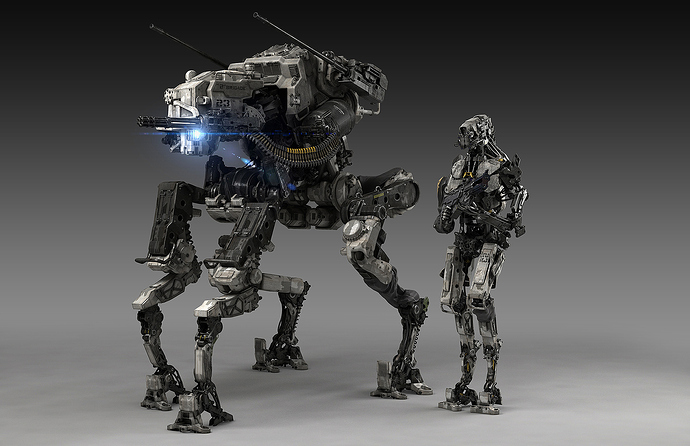 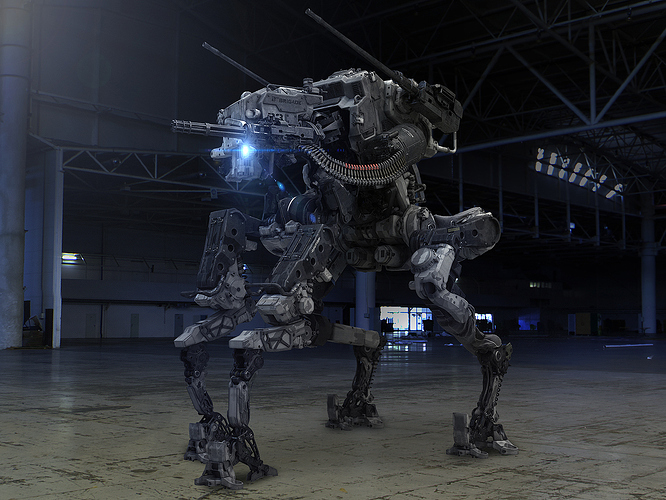 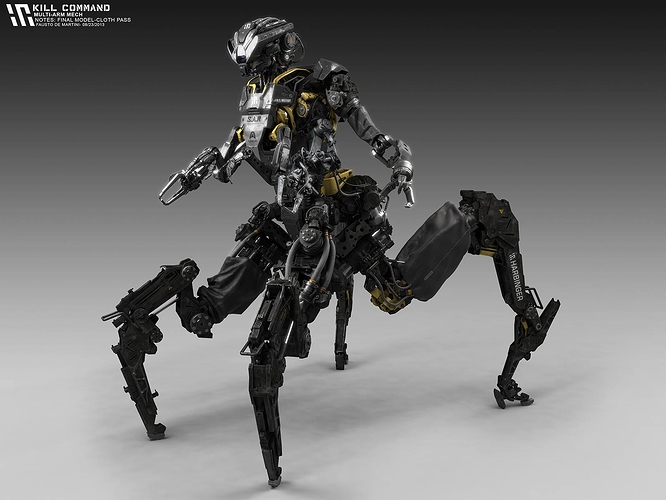 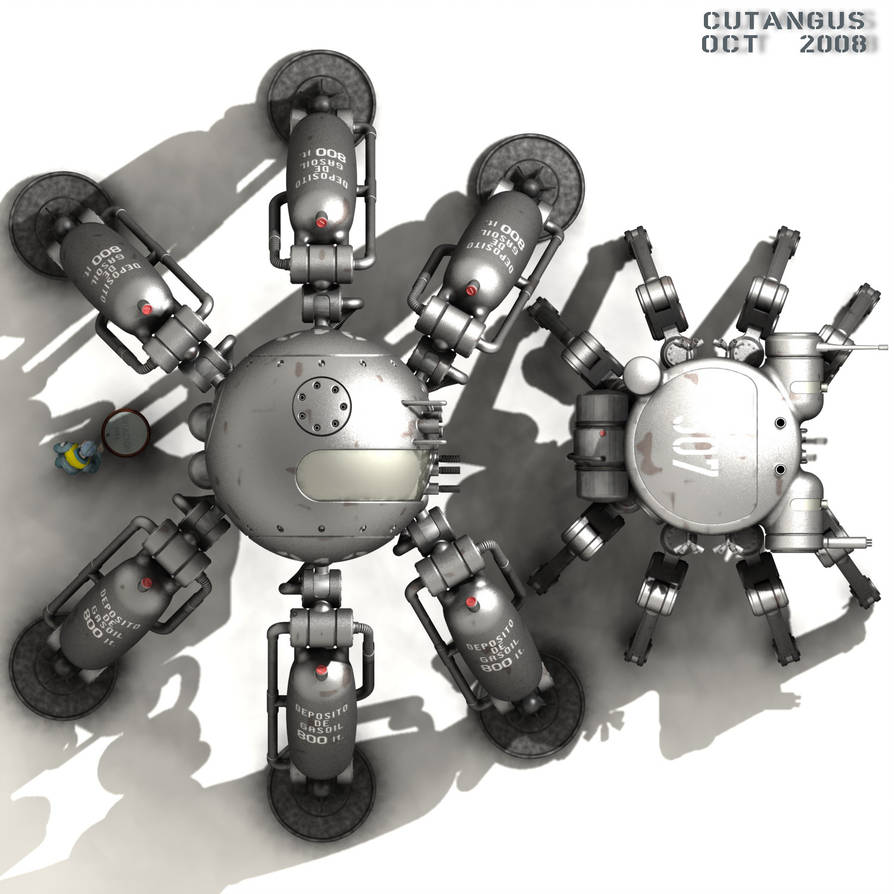 the issue with “stealthy” robots is that you can detect whether they see you or not, meaning that robots dont have stealth in any way. it’s entirely irrelevant.

While i do agree that there should be more robots, I think we only need 1-3 more types, and some more diffrences between prototype/military/FNIX class bots.
(for example, FNIX tanks should carry more rocket pods / MGs / mortars than a prototype tank)

With stealthy machines, I meant not visually stealthy, but quiet.
These are small machines, obviously, as size creates sound.
One cannot have a 30 ton tank ballerina, in the end.
It is however, therefore not impossible, having small, “noiseless” machines…

Also, the army is not something to focus on “a few types”.
Take drones, how many are in use by the army, nowadays?
They virtually have one to erase the toilet, one for the living room, one for the bathroom.
Well, not like that, but they got scout drones, missile based drones, specific machines, lat’s put it like that.
It would also be logical for GZ, I think, to have more specialized machines.

Does NOT mean, that I completely disagree.
The CURRENT area would be silly to have 30 more types of enemy.
But in later DLC, covering more area?
Hell yes.

In the end, it is variety that makes us love food, right?

What I ment with stealth is that you can notice the small white bar turn yellow when they notice you. Every bot has it, including the supposedly stealthy ticks and hunters.

Yes, but, that should be removed for the Stealthy ones.
I THINK, I can be quite wrong, this would not be too hard to do…

Honestly, the enemy indicator slightly ruins the game. It takes away the whole aspect of being hunted, by telling you when you approach an enemy. A few ideas for this problem: Maybe if the indicator only appeared when you point your gun/mouse at the enemy, or looked through binoculars, or something like that, to allow a more suspenseful hunter vs. hunted gameplay. Or maybe the indicator could change, so that it only indicates that you’ve been spotted and not where the enemy is, to add to the “…

I play without music.
I hear and identify them long before see them, long before the indicator pops red.
So, it should not be an issue.

Now many turn music up in games, I fail to get it, one does not enter a warzone listening to his music? O_O

as a musician:
no music? heresy :v

The ideas are nice, but i feel like the skies are what is a bit empty.

We only have the seeker for things that float around and annoy the living hell out of you.
It would be nice to see something else flying, something like a drone with a small caliber machinegun attached to it.

You cannot fly, so…
Otherwise, I did suggest drop-machines… dropping all kinds of other enemies.

I would hate them too.

but to further explain
something like a runner but it flies a bit higher like 2 or 3 meters above what a Seeker normally floats at.

Great ideas from all of you tho the most prominent ones present in this thread are I think a little to ambitious for a game of this calibre.

@J053phH1.LL
Ambition is what makes things great, my friend.

Yes I know but to much of anything is never good.