Basicly there are two major things:
Problem 1: Inconsistent mouse sensivity in Scopes.
Problem 2: Some Player commands will be ignored by the game during “Release ADS animation” (I will get into this topic in another thread here)

So this is about Problem 1 and to understand better here some basics: 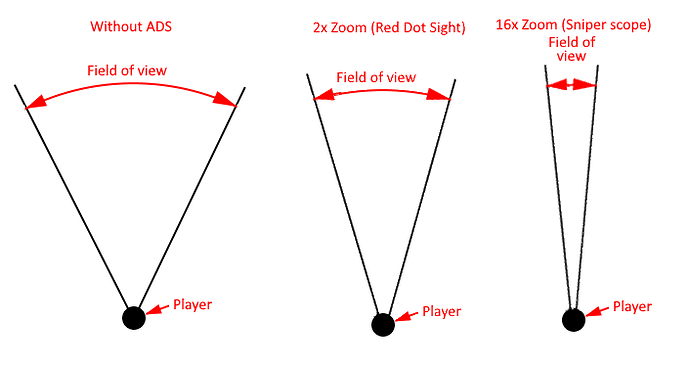 FOV all.png706×375 25.8 KB
The image on your screen in FPS is a certain angle ot the world that surrounds you. This angle can be adjusted in the settings and is called “Field of view”.
If you don’t look through your scope (without ADS) this angle is for example 60°.
(ADS = Aim Down Sight, that is when you hold right mouse button and look through the weapons scope/ iron sight)
While ADS this angle gets reduced. The amount of reduction depends from the magnification of your scope.
Let’s say the iron sight has a angle of 50°.
A 2X Red dot scope has a angle of 40°.
A 16X Sniper scope would have only 10°.
(Those angles are only examples)

Now lets imagine the player moves his mouse without ADS, the FOV rotates around its position. 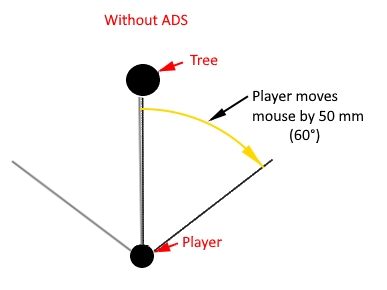 To show this rotation we need a fix point what is here a tree. The player starts his rotation when the tree is on the right side of his screen: 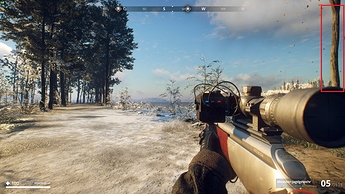 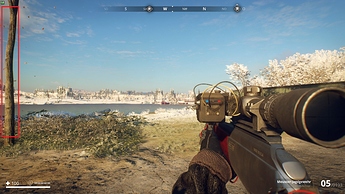 There is a second sensivity value in the setting: “Aim Sensivity”
It its the same but it only affects ADS and it for the iron sight the FOV has 50°.
And as a reference lets say the player have set the aim sensivity so that he has to move his mouse again 50 mm to bring the tree from left to right of his screen. 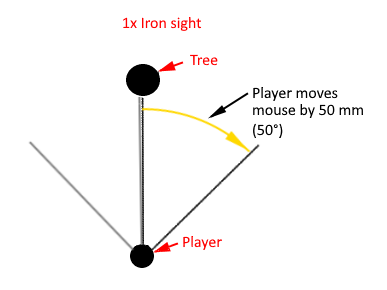 Now it gets interessting and we get closer to the actual problem.
What does the game shows when you do the same motion (50 mm) with a 16X Sniper scope? 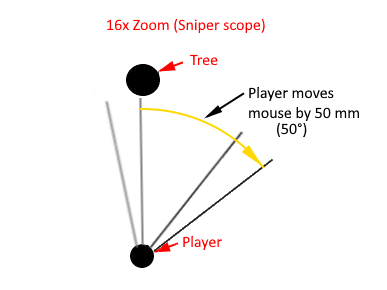 The rotation angle is the same 50° and the player made a motion that shows him 5 times his screen width.
This behaviour makes it very difficult to aim accurat with a 16X scope, if you set your “aim sensivity” that you can aim properly with a iron sight or 2X Red dot scope.
But why does it feel so inaccurat?
If you move your mouse by 1 mm in iron sight you rotate your screen by 1°. This is 2% of your screen width (1°/50°).
If you move your mouse by 1 mm in 16X scope you rotate your screen also by 1°. But this is 10% of your screen width (1°/10°).
So the motion on your screen is 5 times higher and therefore it is much more inaccurat. It feels extremly hecticly and unsmooth.

In other games this behaviour is different. it looks like this: 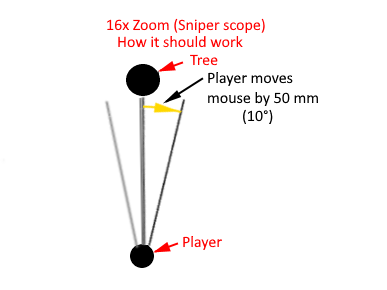 The difference is that here the player moves his mouse by 50 mm and rotates only by 10° which is the FOV angle of the 16x scope FOV.
If you move your mouse by 1 mm in 16X scope you rotate your screen by 0,2°. This is 2% of your screen width (0,2°/10%)
As you can see this would remain your felt sensivity but with a smaller FOV angle and because of that your much more accurat.

How to achieve this:
The key is the “Aim sensivity”. There have to be a correction value in each scope / zoom level that you have to embed in the amentioined formula.

You have to consider that this change has to be done for each zoom level of each scope.
That means for the 12-16X Scope with 5 different zoom levels you have to set a value for each level.
12X ; 13X ; 14X ; 15X ; and 16X.
You could also think about romoving these zoom ranges and set one fix zoom level for each scope.

PS: Please don’t forget the binoculars. And btw. with it you can test the different felt mouse sensivities very well. Just compare it from the highest and lowest magnification.

Don’t count on getting a lot of attention if you name your topics “Why GZ is a bad FPS”. Just saying.
The features you bring up are worthy of attention but I wouldn’t go so far as to call it a poor example of the genre just because you happen to disagree with a few mechanics.

good point, I think its better now. Thanks for the tip

Very good writeup, and I agree it would be nice if they fixed this. Thankfully I can adjust sensitivity on my mouse on the fly, but I agree fully that this needs to be adjusted.

Also, while you’re at it devs, allow an option to toggle scope without the need to hold down the button (like toggable running).

…there is a workaround for toggle ADS if you have a mouse/keyboard with macro capable software. I just tried this for the first time using Razer Synapse to set my ctrl as a macro playing hold RMB once.
It works, one click of ctrl and I go ADS and stay there.

Release ADS is still a RMB click though with my simple 1button hold macro logic, I could probably tweak it some but as a first try this works good. I can move in any direction and zoom.

Thank you for this detailed analysis, Dantec! I really hope that helps!

You could also think about romoving these zoom ranges and set one fix zoom level for each scope.

Only this suggestion would be my least preferred. What is needed is that irrespective of the current scope, the game knows the exact magnification depending on scope and zoom step. Then it can mathematically correctly compensate according to what you have written above.

Don’t count on getting a lot of attention if you name your topics “Why GZ is a bad FPS”. Just saying.
The features you bring up are worthy of attention but I wouldn’t go so far as to call it a poor example of the genre just because you happen to disagree with a few mechanics.

You are right that a friendly title is important. But Dantec is right that the sensitivity for scopes in this game is god-awful. It does not have to do with mechanics, but the lack of those.

Your right, they should fix it for all zoom levels and keep the variable scopes. They would have to do it anyway for the binoculars.

I feel the need to say, though, that the scopes as such are fine, even very good! Every scope can zoom, I like the different levels of clarity for the tiers, the scoping in and out - aside from delays of sensitivity and button presses, works very well. I enjoy that actually!

Devs, is there a chance to implement this in the near future?

If they can’t come up with a formula that works for different zoom levels, then the other option would be individual sliders in the settings menu for said levels. This would probably look pretty cluttered though, and I hope they can come up with something. If my mouse weren’t able to change sensitivity on the fly, I’d probably never use the 16x zoom level.

That was my first suggestion:

Hi devs and other players, in the last live stream I asked for this and I thought it would help to get feedback for the devs here. So I like the game but in terms of a shooter game it does not the bast job in my opinion. What annoyes me the most is the mouse sensivity variation. (If you don’t know what I mean, take the binoculars and move your mouse in the lowest zoom level and compare it to the highest level) I set my sensivity so that the mouse feels good while not aiming. But when I aim, n…

That was my first suggestion

Come to think of it, maybe it would be preferred to be able to adjust each zoom level individually, pretty much like the advanced sensivity settings of BF5 you posted?

The default/center position (factor 1.0) should still follow a decent formula delivering a “neutral” result. I don’t think there is a way around that.

Okay, you’ve got my upvote.

GZ’s big brother, The Hunter: COTW, has the same issue, by the way.
Imagine trying to get that pesky deer running across the field right in front of you, and you juuust can’t scroll fast enough to get him in your sights!

This is in no way game breaking for GZ or TH, but it would be a welcome improvement to fix it.

The game evolves and just got a big Update but this problem is still untouched. Devs can you please work on it or at least respond and talk with us?

I think implementing varying degrees of ADS which correspond to different scopes and zoom levels is much tougher than it initially seems.
Why?

Since peripheral manufacturers (e.g Logitech, Corsair, Razer) have gone so far to implement on-the-fly DPI adjustment for their mice and even in their software.

For example: i have Corsair Sabre RGB mouse and in the Corsair iCUE software, under mouse DPI settings, i literally have dedicated DPI setting called “Sniper”. By default, i can activate it from the button just below of my scroll wheel, on top of my mouse and it changes my DPI from 3000 (my preference) to 400, just to combat the issue in shooting games where there is no varying degrees of ADS.

It might be that mice have a “sniper”-botton as mine have one too but that does not help mutch. You could adjust it to one zoomlevel of one scope.
Mutch more important is to have a consistend mouse sense in all zoom levels.
To do that the devs have to add the correction factor into the game code or they could add a variable and like it to a sense slider for each level so we can edit this factor by ourselves.

I hope, after you fixed the AI problem and the incorrect difficulty settings, you consider to realize this improvement.

After 7 months and some updates I wouldn’t count on a fix any time soon. It also not a hardware related issue as other game-engines excel in mouse-dpi handling. I was playing Doom Eternal a bit recently and, geez, WHAT a difference in exact and precise input handling.

It’s furthermore hard to believe that the problem is a too tough nut to crack for a team that compiled something complex and often quite smart as the Apex-engine - and THAT is the real culprit. The input handling of said engine has vast areas to be improved in. That is a fact, and there is nothing that would require sweet-talk because games older than many players have a way snappier input handling than Apex. So I’d say: It’s d really be sweet if the devs would start to fix these basics.